Nothing goes unnoticed by the watchful eye of PEMRA. The authority has issued a show cause notice to Bol News after the channel failed to comply with their orders.

Yesterday we reported that Amir Liaquat’s Show on Bol News, “Aesay Nahi Chalay Ga” was banned from airing by PEMRA. Amir Liaquat himself was also banned from appearing on TV in any way be it an old news or telecast or anything otherwise.

Amir Liaquat appeared on Bol News adverts and on the show on the day PEMRA banned them. He also hosted the show on Thursday night bad mouthing and hurling abuse towards PEMRA.

Several cable operators across Pakistan stopped airing the channel due to this reason as well.

According to PEMRA show cause, “M/s Labbaik Private Limited, “Bol News” in blatant and deliberate violation of aforementioned prohibition orders not only telecast the programme ‘Aisay Nahi Chalay Ga’ but also the host Dr. Amir Liaquat appeared on Bol News at 22.45 on January 26 2017.” Later the program was re-telecast by the TV management again in violation of the PEMRA orders.

PEMRA show cause has termed the airing of the TV show as “willful defiance of the orders of the Authority, which is a cognizable offense under Sections 29, 30, 33 and 34 of the PEMRA Ordinance 2002 as amended by the PEMRA (Amendment) Act 2007. 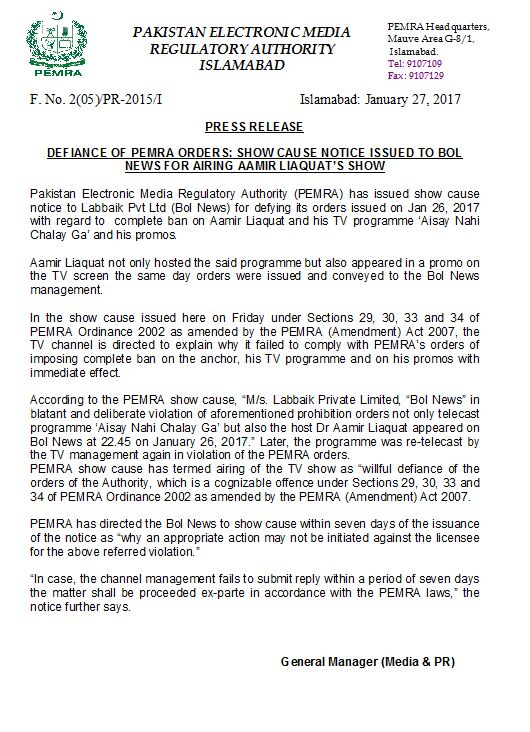 Bol News is supposed to provide a reason as to why an appropriate action should not be undertaken against them due to the earlier mentioned violation.

If Bol News fails does not offer a credible response to PEMRA within 7 days then “the matter shall be proceeded by ex-parte in accordance with the PEMRA laws”.