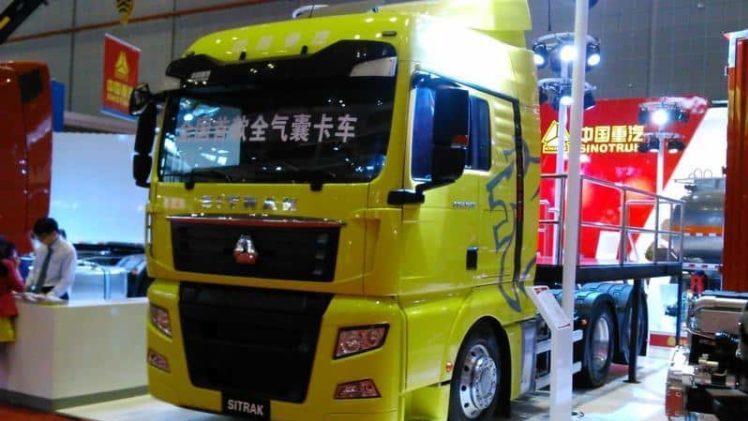 China Pakistan Economic Corridor (CPEC) has brought about many changes to Pakistan’s economic and infrastructural outlook. Along with several developmental projects that are being constructed, Chinese businesses are also eager to enter Pakistan to make the most out of CPEC.

One of the changes we are going to witness is the advent of a large number of Chinese trucks and truck companies in the country. At the recently held Pakistan Auto Parts Show held at the Karachi Expo Center, Chinese truck makers exhibited their offerings. Since the CPEC desires to connect China with Pakistani seaports, it is no surprise that the Chinese truck makers are eager to enter the Pakistani market and reap the dividends.

Jawaid Iqbal, Manager Tender and Commercial Sales at Dysin Automobiles Limited said that they are expecting better sales in the coming months.

Dysin Automobiles regularly participates in Pakistan Auto Parts Show and has managed to sell around 700 trucks in Pakistan so far.

Normally one would imagine that trucks are used mostly for transporting goods like oil and other commodities. However, due to greater economic activity thanks to CPEC, a large number of Chinese trucks are being bought by private contractors for work on big infrastructure projects.

Chinese Trucks to Be Used in Karachi’s Mass Transit Project

At the Auto Parts Show, 3 Chinese Truck makers participated with just one European truck company. Rana Ali Hassan, Director Sales and Marketing of R&R Corporation Pvt. Ltd. mentioned that more than a dozen Chinese buses are going to arrive at Karachi soon. These buses will be used in the city’s mass transit project.

The rising sales for Chinese trucks is due to the reason that they cost almost half of what their competitors offer. Supposedly, if a Chinese truck costs Rs. 7.8 million then an equivalent truck made by a Japanese company would cost Rs. 12.6 million. The European trucks go higher still and cost around Rs. 16.5 million for the same specifications.

Europeans Not Far Behind

This doesn’t mean that European truck companies are reluctant about entering Pakistan. A German truck company MAN SE is planning to enter the Pakistani truck market and hopefully pave the way for other European companies to be part of the CPEC bonanza.

Volvo has already announced its plans to expand operations in Pakistan as well.