The Pakistan Stock Exchange has taken another plunge with the benchmark KSE-100 index losing 536 point or in other words, 1.09 percent. 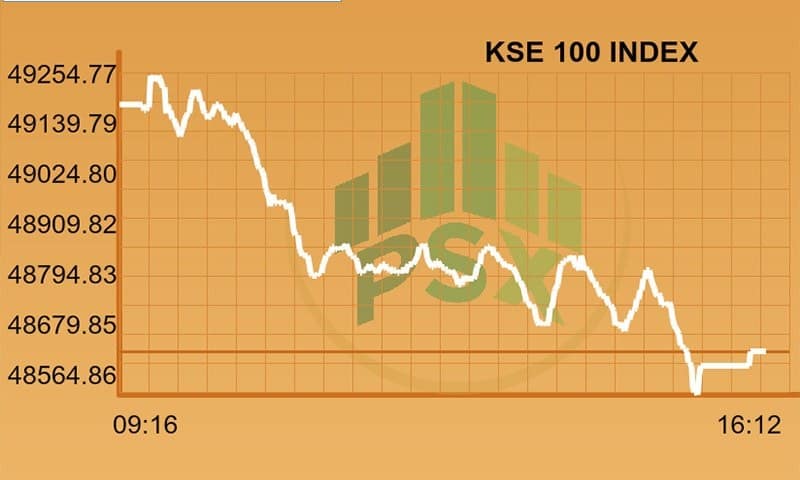 Volumes plunged to 50 million shares, with a total worth of only Rs. 4.99 billion

The falling prices of crude influenced the index-heavy oil and gas sector which was subject to dull trading with total volume dipping to 133 million shares.

Yet again the benchmark has fallen below 49,000 as volumes were led by engineering sector, followed by refinery stocks and then banking. The total volume went down to 50 million shares with a total worth of Rs. 4.99 billion.

Speaking about the downfall, Hammad Aman of Topline Securities said:

Low volumes with lowering global oil prices led the decline in the index.

Overall, stocks of 384 companies were traded on the exchange, of which 77 gained in value, 290 declined and 17 remained unchanged.

“KSE-100 shed 536 points […] amid lowest volumes since July 4, 2016, as investors & traders alike took to the sidelines, opting for a wait and see approach on concerns over a regulatory crackdown, broker defaults and the verdict pending in the Panama Case,” read a note issued by Topline Securities.

(POL -3.81%) and (PPL -2.03%) plummeted further down and closed in the red as oil prices skid to their lowest in three months despite OPEC efforts to curb crude output, he said.

(ISL +2.74%), (ASL +4.09%), (STCL +7.54%) and (INIL +0.83%) perked up, closing in the green as Lahore High Court did not grant any stay order to commercial importers of tiles, steel and paper in the four new petitions filed against the anti-dumping duty investigations by the National Tariff Commission, he further added.

Volumes were led by: