By now, there is hardly an aspect of Samsung’s upcoming flagship that we don’t know. Thanks to the countless leaks, we know about a bunch of major hardware revisions for the S8, including a move away from hardware buttons to a more expansive panel, leaving only the software perhaps as the last gray area. 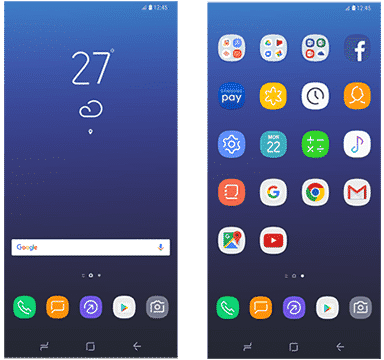 Until now, that is. A new leak indicates a much more modern and minimalist design for the upcoming S8. Seeing how harshly Samsung has been criticized historically for its excessive take on Android, it is quite refreshing to see its efforts to tone-down finally bear fruit.

The image files for the phone were discovered via the Smart Switch APK. The icon packs which were leaked all feature a flatter look with cleaner outlines for logos, with little hints of skeuomorphism. The icons are also shaped to look pretty much the same, following the same design language as was introduced with the Samsung Experience skin it embraced earlier.

Underneath the launcher, you see the three on-screen Android keys which will be solely used in place of the company’s traditionally used hardware physical buttons.

The Galaxy S8 will also reportedly launch running on Android 7.0 Nougat, which is really the only option if you consider its availability and the nature of this release.

Samsung will unveil both the Galaxy S8 and the S8 Plus phones by month-end, on March 29th. Until then, watch this space for more leaks (although frankly, we don’t know how could Samsung possibly surprise us).