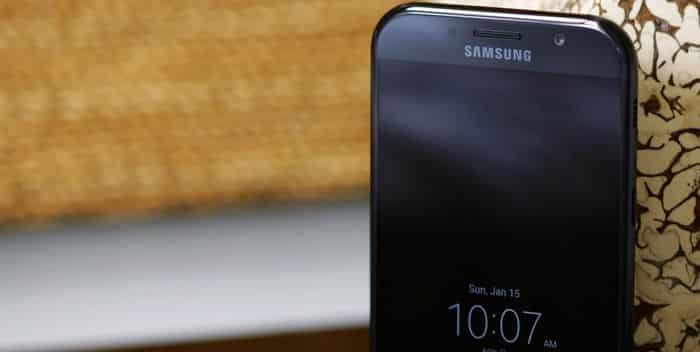 The Galaxy A7 (2017) is the most expensive entry to Samsung’s A series and features the same high build quality and premium features associated with the series.

It builds on its predecessor, A7 2016, with better specs, larger screen and a superior build quality.

Let’s a take a deeper look at what the Galaxy A7 2017 comes with whether a price tag matching some flagships is really justified:

Galaxy A7 (2017) feels solid in the hand and the adequate weight only adds to the premium feel. While the phone looks like it has a dual-glass display, it is actually a shiny plastic which looks like a glass panel. Clearly, Samsung wanted the phone to resemble the Galaxy S7.

The slippery back panel along with the metal frame makes the phone a bit slippery and the large size makes it difficult to handle. We’d advise using a protective case as a precautionary measure.

Considering this is an AMOLED panel with a diamond sub-pixel arrangement, the 1080p resolution feels a bit stretched out. The pixels do become noticeable when you look up the screen closely. On the other hand, the display is bright and you won’t face any issues using it under the sun.

Unlike other A series phones, Galaxy A7 (2017) doesn’t have any issues with the screen. There is a slight brightness drop but there isn’t any noticeable color shift. It seems Samsung has used a superior AMOLED panel on the A7 (2017).

The phone is also water and dust resistant certified by the IP68 rating. It’s a nice addition and you usually don’t find something like this in the upper midrange of smartphones.

Galaxy A7 (2017) is capable of matching midrange phones in terms of processing power. When considering other phones available within this price range, the Galaxy A7 (2017) doesn’t even come close as far as performance goes.

However, real life performance is great. A common user wont notice any difference in day to day use. Occasional gamers would find that nearly all games run fluently and in case they don’t, Samsung offers a special mode which reduces the resolution and improves the frame rates while reducing battery usage as well.

Multitasking isn’t what you would expect from a phone with 3GB of RAM. It does perform better than the Galaxy A5 (2017), which has the same amount of RAM. You can multitask with about 5 to 6 heavy apps at the same time without losing your last used app to ‘optimisation’. Samsung has improved optimisation on its phones but it still has a long way to go until it matches other Android OEMs in terms of multitasking.

Samsung Galaxy A7 (2017) improves on the benchmark scores despite sporting the same CPU as the Galaxy A5 (2017). It seems the larger body helps in keeping the processor from throttling due to heat.

Antutu score is slightly higher than the A5 (2017) while other benchmarks are within the margin of error. You get the same average single core performance in Geekbench while multi core performance is still excellent thanks to the eight Cortex-A53 cores. PC Mark gives out about the same score to the Galaxy A7 (2017) as it did to the Galaxy A5 (2017).

The Galaxy A7 (2017)’s fingerprint sensor resides under the home button. Similar to what we have already seen in the A series, the fingerprint sensor works well but does tend to miss a few fingerprints every once in a while. The sensor activation time is pretty good and it takes it less than 0.5 seconds going from sleep to the homescreeen.

The phone’s loudspeaker is average at best. The audio output is slightly on the lower side and the quality isn’t great.

The Galaxy A7 (2017) comes with the company’s new UI which debuted with the Galaxy S6. It’s much simpler and less of a memory hog. The UI shows no lag and the animations are pretty smooth and pleasing to the eyes. Customisation options, however, are limited. Samsung has made some improvements to the default navigation as well, adding a few nifty features here and there. The new Settings menu is also easier to navigate and borrows its looks from Android Nougat.

The Galaxy A7 (2017) comes with and Easy Mode and an S Bike Mode. The first one is a simpler and less complex interface for those that have a difficult time getting used to Smartphones while the second is a special mode for bikers who get easier phone navigation, unique safety features and some other utilities so that phones don’t cause accidents while on the road.

Despite launching in 2017, the Galaxy A7 (2017) comes with Android 6.0.1 Marshmallow. Samsung is planning a Nougat upgrade in the future but it would have been better had it featured Android 7.0 out of the box.

Samsung put a 16MP rear camera with f/1.9 aperture on the Galaxy A7 (2017). Since the Galaxy A5 (2017) comes with the same sensor, we already had an idea of what to expect from this expensive midranger.

The 16MP main camera is pretty good for daylight photography. While it doesn’t match the modern flagships, it does get the job done. There’s plenty of sharpness and the colours are good. Noise is kept pretty low as well.

Just like the other A series phones, the A7 (2017) is a poor performer in low light photography. As soon as evening strikes, the noise multiplies several fold, the color, sharpness and brightness vanish and the camera results become poor. Even the flash and Night Mode do little to improve the situation.

The camera performance is self-explanatory once you go through the image below:

HDR mode works pretty much the same way it did on the Galaxy A5 (2017). It restores some of the shadows but does little when it comes to highlights (bright spots). The original image hardly changes following the HDR implementation.

The Pro mode on A7 (2017) is meant to offer more control to the power users. However, the mode is very limited in terms of options and the weak sensor also has little to offer. The user can adjust the ISO level from 200 to 800 and vary the exposure. There are a few other options as well but nothing that affects the end result by much. Similar to the Auto mode, the picture quality remains nearly the same as what we have seen in bright daylight and low lighting.

The Galaxy A7 (2017) comes with a 16MP front camera. It is the same sensor that you find at the back of the phone. Though a change in autofocus functionality and reduced field of view do make the front camera slightly inferior to the main camera.

In terms of image quality though, there’s hardly much difference. The pros and cons remain the same. By numbers alone, it should offer some great quality and the camera doesn’t disappoint. The quality is superb and almost as good as the rear camera. The field of view is smaller though and the autofocus is fixed.

It also comes with features like skin tone adjustment, face slimming, blemish removal and more which can artificially make your selfies look better.

The Galaxy A7 (2017) saw an increase of 300mAh battery over its predecessor. But a bigger screen and more powerful processor require more juice as well. Still, considering what we saw with the rest of the A series, the battery life was expected to be quite good.

Galaxy A7 (2017) posted great numbers in our benchmark test where it lasted for nearly 10 hours in a single go. The benchmark consists of equally timed slots of video playback, video editing, web browsing, graphics editing and gaming. The brightness was kept at 50% the whole time.

In day to day use, we saw an average screen-on-time of a little less than 8 hours. Longer battery life can be achieved with Samsung’s built-in battery saving modes.

The phone is charged via a USB-Type C cable which also supports fast charging. Samsung does bundle a fast charger alongside the phone so you can have the large battery it full in a little less than two hours.

The Galaxy A7 (2017) comes in with a price tag that matches some flagship smartphones. It does have a few unique features in its favor but its high price puts it amongst the worst phones in terms of price-for-performance ratio.

The phone can be bought for Rs. 40,499 without official local warranty. In case you want the official Samsung warranty, you will have to pay a premium of nearly Rs. 12K on top of what is already a highly priced phone. The official warranty version comes in at Rs. 52,999.

So if you’re in the market, we would suggest increasing your budget and just getting an S7 if you want to stick with Samsung.

Here’s a short summary of Samsung Galaxy A7 (2017) and what it offers: