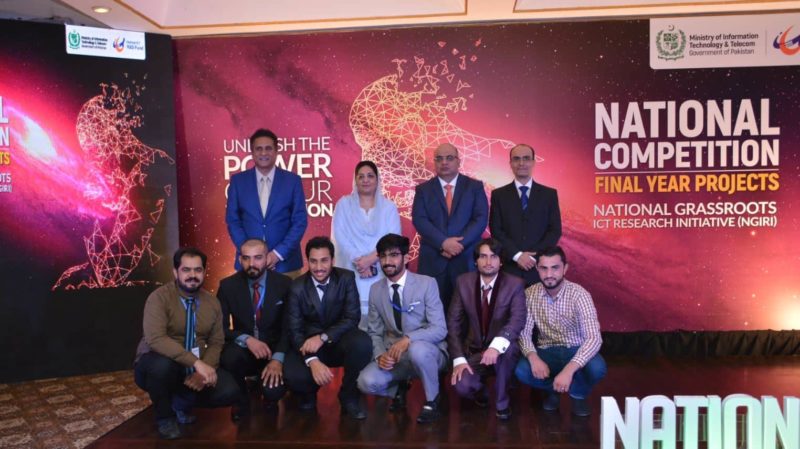 Ever since the inception of NGIRI in 2011, 72 public and private sector participating universities submitted 5,538 FYP proposals out of which 2,067 FYPs received an overall grant of worth PKR 130 million. Under Phase-II of this initiative, a national competition was announced in 2016.

Ms. Anusha Rahman Minister of State for Information Technology and Telecom, also presided over the award ceremony of National Competition.

She congratulated all the participants for working on the projects. She stated that 3G/4G brought the revolution in Pakistan and that “our resolve is to connect the unconnected. People with no connectivity will get 3G and by the end of 2018 everyone will be connected.”

She said, “I personally believe that coding is the future; we need to train our children on computer skills. The freelancer initiative is to turn the students to become entrepreneurs’ because no government can provide so many jobs. 1 million freelancers in 2 years is the target. I want to see 50 % of the population of my country to contribute in the economy.”

Awards ceremony was carried out by the Minister, where a cash prize of Rs. 400,000 was awarded to 1st position holder Zain Qasir and Hamza PNEC NUST for their project: Power Watch Dog.

Second position was won by Ali Gul from Balochistan University of Information Technology with a cash prize of Rs. 300,000 for his project: Smart Helmet for Coal Mines.

The 3rd position with cash prize of Rs. 200,000 was won by Owais Ahmed and Hassan Cheema university of Faisalabad and his team for their project: Design and simulation of fire tube boiler using PLC to avoid industrial boiler accidents.

While speaking on the occasion, Mr. Yusuf Hussain CEO National ICT R&D Fund said that universities from across Pakistan participated, not just those from Lahore, Karachi and Islamabad’s elite universities. He thanked the students, supervisors and judges.