The show cause notices have been issued for ‘casting aspersions against the armed forces of Pakistan in its programmes.’

The first notice was issued against the airing of a special transmission on Dawn Leaks Report on May 10th, 2017. In the programme, ARY TV anchor Arshad Sharif compared a tweet by ISPR to the the 1971 tragedy. PEMRA notes that,

Drawing such a comparison is highly objectionable, derogatory and amounts to lowering the morale of Pakistan Army.

PEMRA says that at a time when the soldiers are laying down their lives for the motherland, comments like this are ‘uncalled for and unconstitutional.’

As for the second show cause notice, ARY News is under fire for its programme “The Reporters” that aired on May 16th, 2017. In the notice, Arif Hameed Bhatti was named by PEMRA for talking against the army.

The programme was aired in violation againt PEMRA’s warning issued to TV channels back on May 12th, 2017. The channels were asked not to air unverified or baseless news against the army or spreading hatred and uncertainty. Mr. Bhatti has been asked to clarify the details about the survey he mentioned in the programme.

The authority has asked ARY News management to publish a reply for both notices by June 1st, 2017. Additionally, CEO of ARY News has also being summoned in person for a personal hearing on the same date.

If the channel fails to comply, “ex-parte proceedings shall be initiated against the TV Channel.” 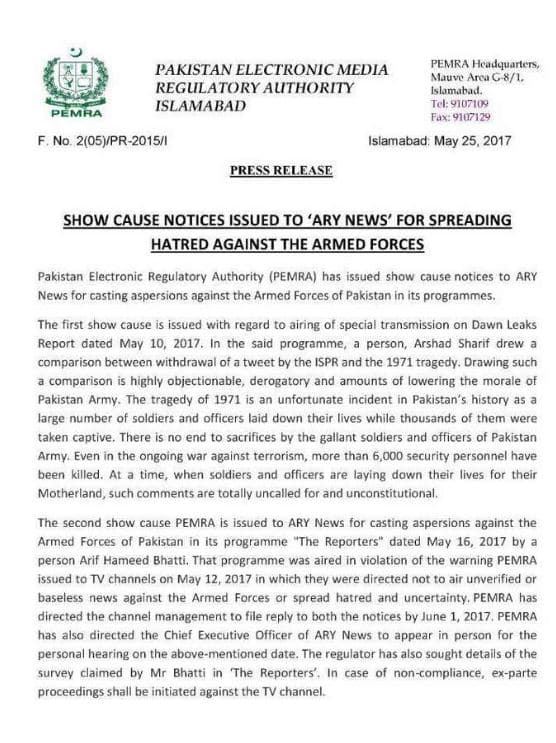