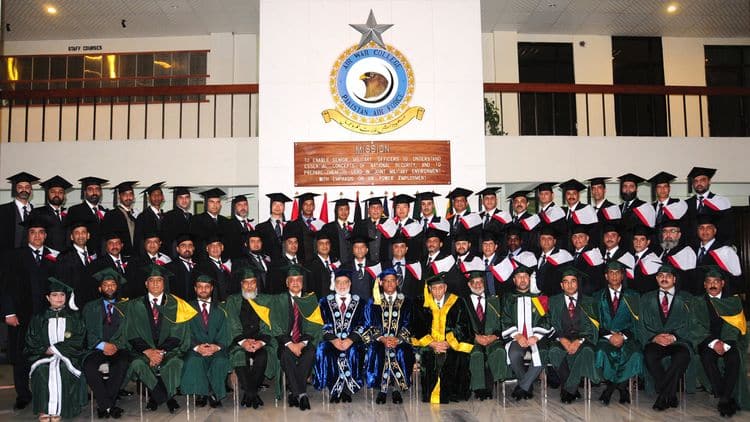 The Air Chief congratulated the graduating officers on successful completion of the course. He expressed confidence that the knowledge and skills acquired at the Air War College would assist the participants to effectively contribute towards the requirements of National Security.

“PAF has accepted every challenge and demonstrated remarkable heights of professional excellence. Indeed, quality training has been the greatest enabler of this excellence and our training institutions have contributed immensely in this regard.” Air Chief added.

Air Marshal Sohali Aman further added that certainly, a high level of cooperation and synergy exists among sister services. “Jointness remains at the heart of modern warfare and through our synergistic efforts we have achieved remarkable success in the War against Terrorism.”

“As senior military professionals, you must remain abreast of contemporary geo-political and strategic environment in order to be better prepared for a befitting response to current as well as emerging security situation challenge”. Sohali Aman

He further said that it was heartening to note that the College had made great contributions to inculcate its graduates with emerging trends in doctrine, strategy and air power employment to face modern challenges with confidence and ingenuity.

PAF Air War College is the premier institution of Pakistan Air Force, where mid level officers of Pakistan Armed Forces and friendly countries are prepared for assumption of key Command and Staff appointments.