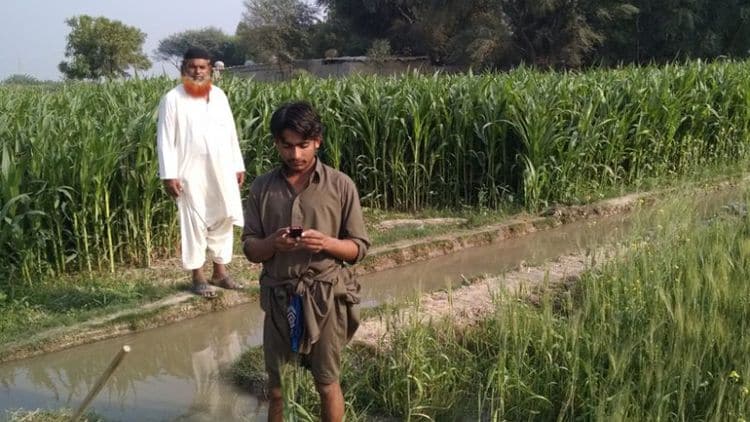 Mismanagement is a big issue when it comes to Pakistani farmers especially given their wasteful use of the available water reserves.

In order to solve this issue, a new program has been initiated which uses satellites and cellphones to convey essential information to farmers. This information can help Pakistani farmers estimate the amount of water their field needs, and that too by using SMS service automatically.

The main purpose of the program is to prevent overwatering in farm fields. A report from the Asian Development Bank in 2013 termed Pakistan as “one of the most water-stressed countries in the world.”

In simpler words, that means Pakistan is among those countries which are in danger from facing drought-like conditions sooner rather than later.

Currently, experts say that Pakistan’s water storage capacity is just limited to holding supplies for 30 days, a figure which is several times below the recommended capacity of 1,000 days. The per capita water resources in Pakistan are on par with those in Syria, a dessert country where the drought has even fueled a civil war.

The water crisis in Pakistan is driven by many factors including climate change, rising population, mismanagement of water resources and greater demand by farmers. The unstable relations between Pakistan and India over the Indus Water Treaty are another key issue that contributes to the dismal state of affairs.

Overwatering is a serious concern for the agriculture sector in Pakistan. Irrigating excess water is costly for farmers who barely make ends meet. On the other hand, acute fuel shortages in Pakistan also create problems for farmers who use diesel powered motors to pump water through tube-wells. The lower the water table, the more fuel it takes to pump it to the surface.

Applying excess water to crops also reduces yields, but many traditional farmers learned their ways from previous generations which did not face such water shortages. In order to prevent under-watering, farmers often make an error in judgement by overwatering their fields.

The Pakistan Council of Research in Water Resources (PCRWR) studied farmer practices to find that rice farmers were using more than three times the water they actually needed. The council reached out to University of Washington’s Sustainability, Satellites, Water, and Environment research group (SASWE) hoping to find a solution to the problem.

The current solution, which began last year in spring with a 700 farmer pilot program, now consists of over 10,000 farmers who receive SMS notifications on their phones. The messages come through an automated system which does everything from downloading the satellite data to sending out the SMS messages after using computer models for each farmer’s land, terrain and crops.

PCRWR plans to scale the program for use across the whole country. The program expects to serve millions of farmers in the country.

Future of the SMS Advisory Program

At present, however, the council is reviewing the system to make it easy for the local farmers to understand. The PCRWR is also trying to ascertain how accurate the system is and how much effect it has on saving farmers’ money and reducing water consumption.

Feedback is being collected from farmers over the phone. SASWE’s Faisal Hussain says that he is yet to receive a report from PCRWR. However, Faisal mentions that they “got a story last month from one of the farmers who was telling us how he was able to get, I think, for every acre 700 kilograms more wheat than his neighbor.”

The current challenges to expansion include the issue of illiteracy and how to better persuade farmers about the authenticity of the data circulated via these SMS messages. The satellite data might also need to be improved if the system is to be implemented in other areas of the country. The only positive is that Mobile Phones are pretty common in the rural areas of Pakistan so communication over SMS should proceed without any hindrances.

Since the system is automated and hasn’t been tailored to the Pakistani locality, most farmers might find it tough to understand the SMS messages. The council might need to simplify the wordings and use local terminologies so that it becomes easier for farmers to follow the instructions.

More details on the program’s progress and the farmers’ opinion on it is available here.