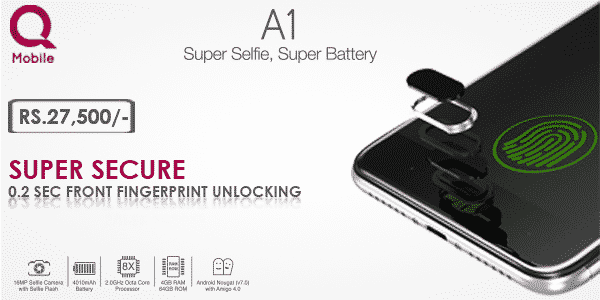 The fingerprint sensor, considered a luxury a few years ago, has now become mainstream.

Head to a mobile shop and you’ll see several dozen Smartphones with a fingerprint sensor on them.

The reason for their popularity was the simple convenience of unlocking your smartphone simple by placing your finger on it. It comes with an added bonus of security barring anyone else who hasn’t saved his fingerprint on your device, from unlocking your phone.

In the early days phones took almost a full second to detect your fingerprint and unlock your phone. With time, smartphone brands have improved their offerings with the fingerprint scanners detecting prints faster than ever.

One of The Fastest Fingerprint Sensors

QMobile is one such brand which is now competing against the likes of Apple, Oppo and others. Their latest flagship smartphone, the QMobile Noir A1, can unlock in just 0.2s through the fingerprint sensor.

It unlocks faster than the likes of Oppo F1s and even Apple’s iPhone 7. Yes, you read that correctly. A phone that costs just Rs. 27,500 beats out a flagship phone that costs 2-3 times as much.

Comparison With iPhone 7 and Oppo F1s

QMobile A1 was tested for its fingerprint sensor’s speed against Apple iPhone 7, Oppo F1s and Vivo V5. The test footage was reviewed in slow motion and repeated at least twice to ensure the credibility of the test. You can take a look at it yourself below:

One of the key features of the Noir A1 is its 16 MP front camera with a dedicated soft light selfie flash (the primary camera includes a 13 MP sensor).

A large 4,010 mAh battery powers the phone and comes with an 18 W dual charging IC with fast charging support.

QMobile Noir A1 is available at retail shops for Rs. 27,500 only. The phone was available for pre-order a few days before the official release. Pre-ordering the phone would get you a signed bat & ball by Wasim Akram and Shohaib Akhtar, free power bank, selfie stick & various personalized merchandise.