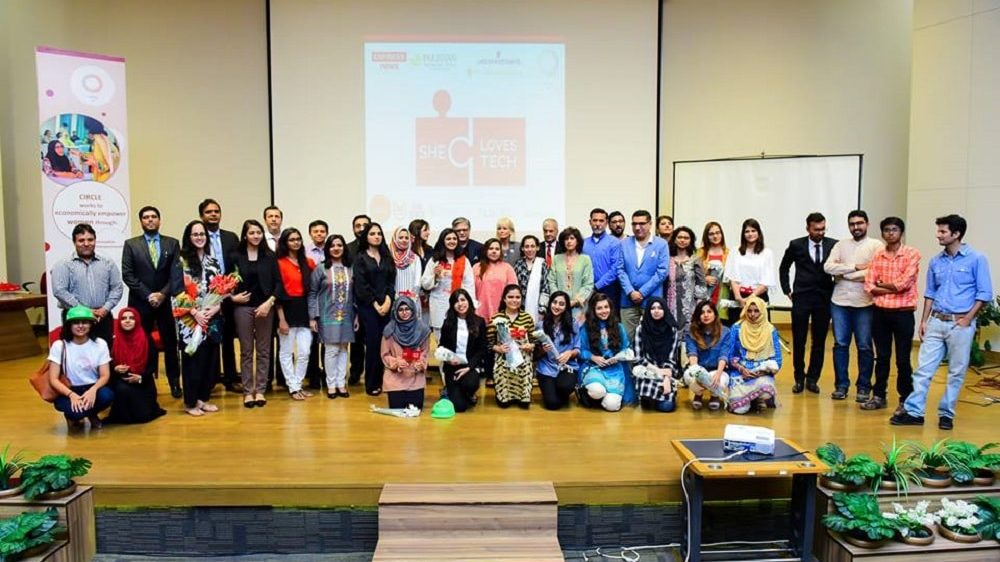 Having evaluated over 80 initial applicants, She Loves Tech Pakistan, a competition held by CIRCLE, finally has a winner.

After pitching to a live audience and a panel of industry judges, Anusha Fatima (founder trashIt) was judged as the winner of She Loves Tech Pakistan.

Team trashIt’s 4 minute pitch revolved around explaining the garbage disposal problem in Pakistan and how the garbage heaps on streets were choking the country’s growth. They then proposed the ingenious idea of composting bins that can convert the organic waste from households into fertilizer, thereby reducing the amount of trash for disposal.

Speaking of the benefits to trashIt of joining She Loves Tech, Anusha Fatima said,

“Through the She Loves Tech initiative, CIRCLE connected me to mentors such as Raza Matin (country consultant, Google) who helped my team further advance trashIt.”

About She Loves Tech Competition

She Loves Tech is a global competition held in eight countries: Canada, China, Hong Kong, Germany, Indonesia, Israel, Singapore, and Pakistan. The winners from these countries shall compete on September 16 in Beijing, after a week-long bootcamp.

While Anusha Fatima and her team will proceed to Beijing in September, runner-ups The PMS Project by doctHERs, Sehat Kahani and meraPaisa will receive mentorship for their startups from She Loves Tech Pk sponsors Lakson Investments and Sybrid. Pakistan International Airlines partnered with CIRCLE to sponsor the winning team’s visit to Beijing.

“Entrepreneurship allows women more flexibility in defining their own space and choosing who they work with. It is empowering to see some of these tech startups talking about ways to improve women’s mobility because that is women’s biggest problem right now.”

CIRCLE, a social enterprise focused on furthering women economically in Pakistan, created the event along with Lackson Investments. CIRCLE’s co-founder, Sadaffe Abid, encouraged the She Loves Tech audience members to find ways of supporting women in their everyday lives, but especially those in fields dominated by men in Pakistan. Delivering the welcome address, Sadaffe Abid said,

“CIRCLE wants to give women opportunities to enter the economy and solve the country’s issues.”