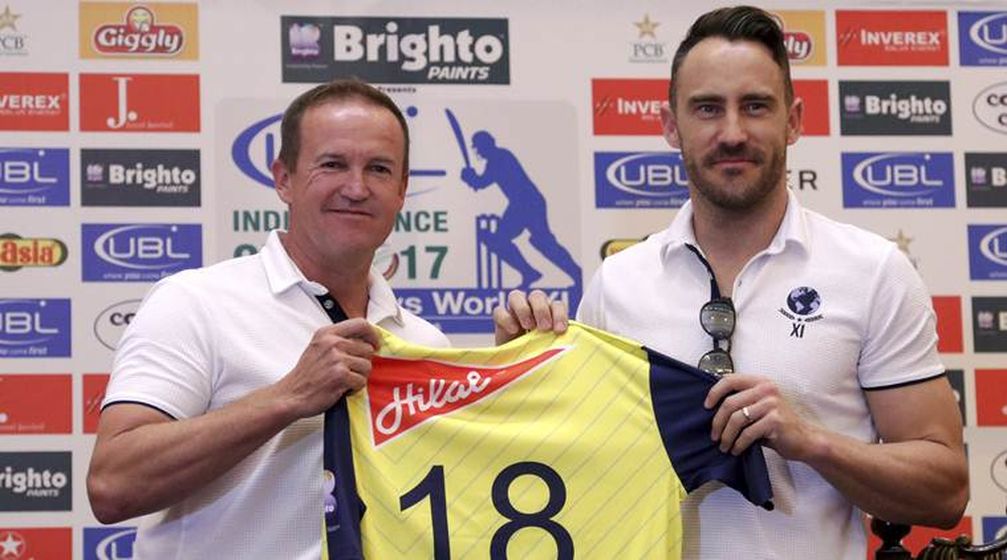 For now, let’s focus on what cricket players and commentators from around the world have to say about this historic moment.

Former England coach and the World XI coach, Andy Flower said, “We are here to celebrate Pakistan’s 70th anniversary of independence, play our part in the revival of international cricket in Pakistan, and play some great cricket in front of the Pakistani people”.

World XI captain, Faf du Plessis said that it is an honour for him to be a part of the team who contributed to the revival of cricket in a country which has been deprived of cricket for a long time. He said

“This will be something that I can say was a huge honour to be a part of. Looking back on my career it’ll be great to say that I made an impact on bringing international cricket back to Pakistan”.

Australian all-rounder Ben Cutting says that he hopes that this series will pave way for international cricket in Pakistan.

World XI's @DavidMillerSA12 is hoping the #PAKvWXI series will be a huge boost towards the resumption of international cricket in Pakistan. pic.twitter.com/hps7sAy76Q

"Doing it as a World XI will hopefully bring everyone together in the country and right around the world" @Cuttsy31 talks ahead of #PAKvWXI pic.twitter.com/TGUNadDjrt

The former Pakistan captain and commentator Ramiz Raja says he is thankful to the World XI players for playing in Pakistan. He also tweeted, saying:

#PAKvWXI Cricket is in the air .. can smell it feel it…Pakistan r u ready to bounce and make some noise..

England batsman, Paul Collingwood is very excited about playing in front of a passionate Pakistani crowd.

I'm like a kid a Xmas again. Can't wait to play in an International T20 again in front of a passionate Pakistan crowd. Training tonight was like living the dream again so can't imagine what it's going to be like in the middle. Wasim Raja was our overseas pro @shotleycc when I was only a youngster and watching him taught me a lot about the game, very skilful! Hope you all enjoy the games, sorry but we'll be trying our hardest to win!#CricketKiHalalala #PakvWorldXI #WorldXI #cricket #tourlife #sport #fitfam #Lahore

The legendary fast bowler, Wasim Akram, hopes that this series will be the rebirth of cricket in Pakistan.

Heading to the heart of the nation for what we anticipate to be an epic rebirth of our country's beloved sport- Cricket! #CricketComesHome

Wasim’s partner in crime, Waqar Younis, will also be seen in action in the commentary box. His excitement is evident from his tweet.

Enroute 2 Lahore 4 #PAKvWXI I'm going pick up from where I left more than 8years ago. Join me tomorrow night and let's make history! 🏏🇵🇰🎉🎈

Heartiest WELCOME to all world 11 player to Pakistan,Love to host u all , enjoy ur stay & m sure u guys wil love Pakistan's Hospitality ❤️👍

Welcoming all the international players,Thankyou for coming!really excited to see you guys playing in my homeland.#PakVsWXI will be a hit! pic.twitter.com/Jed4pBUX6R

Three of the world’s top five T20I bowlers will be in action at the Independence Cup!

Wahab Riaz encouraged the fans to buy the tickets for the matches to witness the history.

You know this is going to sell out within hours! Make sure to grab a ticket, you don't wanna miss crickets home coming! #PAKvWXI https://t.co/mEyfZ5Fq5v

Welcome to Pakistan everyone. Thank you for coming. Inshallah now the abondoned grounds of Pak will be alive once again. #CricketKiHalalala pic.twitter.com/MetdCU5BaF

The two-time T20 World Cup winner, Daren Sammy, is excited to play in Pakistan yet again, saying that this is more than just a  game.

Let’s hope that this series turns out to be an epic one and opens the doors for international cricket. The fans have been longing to see their heroes and favorite players for a long time.