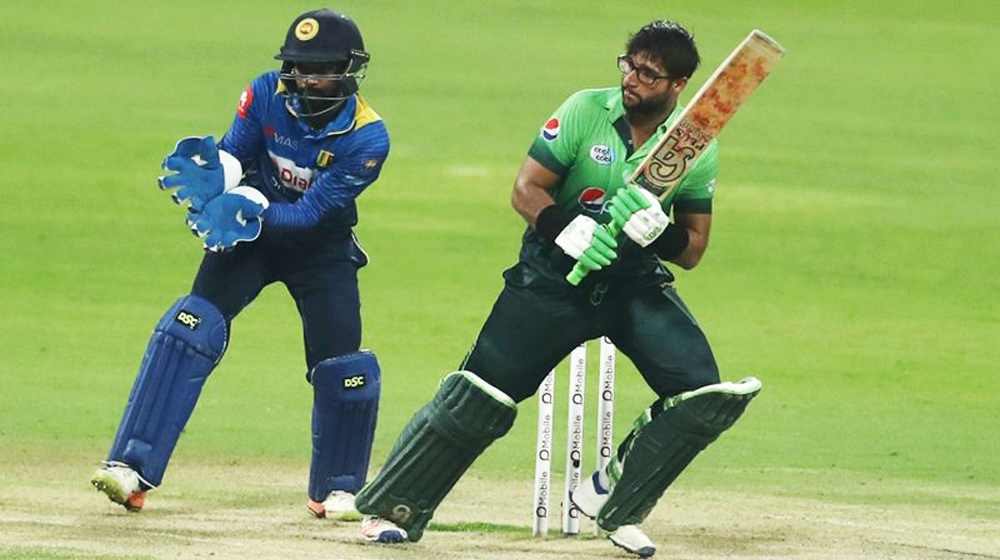 Being 2-0 down in the series, Sri Lanka had to give a solid performance to end Pakistan’s impressive run in ODIs as well as to stay alive in the series.

Hasan Ali’s third 5-for of the year, combined with a brilliant knock from debutant Imam (100), helped Pakistan take a decisive 3-0 lead in the series with the remaining two matches scheduled in Sharjah.

The target of 209 was never going to be enough and Inzamam’s nephew gave a shut-up call to the critics for calling him a Parchi player. The left-hander walked away with ‘Man of the Match’ award for his debut hundred.

Sri Lanka opted to bat on what looked like a batting-friendly wicket at the start of play. Any captain would love to bat first on Abu Dhabi pitch in a day/night fixture, and so did Sri Lankan skipper Tharanga.

Getting to bat first for the first time in the series, Sri Lanka made a positive start and brought up the team fifty in just 9 overs. Dickwella was cleaned up by Hasan Ali in his first over, who has developed this habit of taking wickets early in his spells.

Despite getting a good start, Sri Lanka failed to capitalize and slowed down the run-rate when Chandimal walked in to bat. A sluggish partnership of 43 from 87 balls made sure that Pakistan got the chance to come back in the game, and so they did.

Chandimal was judged LBW at 19, the team total being 102-2. The captain couldn’t last much and fell for what looked like an impressive fifty (61). All the Pakistani bowlers contributed with the ball ensuring that Sri Lankan middle order crumbled yet again in the series. 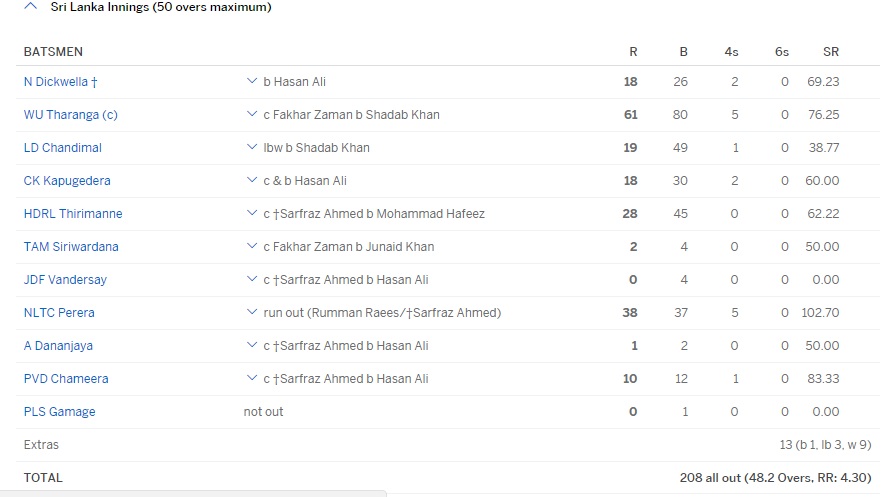 In pursuit of 209 at 4.18 runs per over, Pakistani openers looked solid, making Sri Lanka turn to their mystery spinner Dananjaya after just 7 overs. Pitch offered good support to the spinner but Dickwella dropped Imam early in the innings.

Pakistan’s 50 was up in 9.3 overs, thanks to some positive intent from Imam and Fakhar. Fakhar was stumped off Vandersay in the 17th over at 78.-1

The 21-year-old Imam became the 12th Pakistani to score a half-century on debut. Both Babar and Imam kept milking singles and doubles before Babar played on off the bowling of Gamage at 144-2.

Imam got a reprieve, after being given out off Chameera’s bowling – the ball touching the ground on its way into the gloves of the wicket-keeper. Imam became only the second Pakistani to score a hundred on debut. He is also the 3rd youngest to score a century on debut.

He, however, got out when Pakistan needed 6 runs to win. Pakistan got home with 7 wickets in hand and 45 balls remaining.

Pakistani pacer, Hasan Ali registered his name in the record books, becoming the fastest Pakistani bowler to 50 wickets, which is the 6th fastest overall (joint 3rd quickest); the fastest being Ajantha Mendis, who achieved the feat in 19 games. He also surpassed Afghanistan’s leggie Rashid Khan as the leading wicket-taker in ODIs this year with 40 scalps.

Hasan Ali in some great company as he becomes the quickest Pakistan bowler to 50 wickets in ODIs. #PakvSL pic.twitter.com/enPkt0fXiH

Pakistan has now tried 24 different openers in their last 105 matches, the most after West Indies’ 26 in 95 matches. Debutant Imam’s 100 is now the second highest by a Pakistani batsman on debut, after Salim Elahi’s 102* against SL in 1995.