The stock started the week in the negative zone over profit taking and political uncertainty. 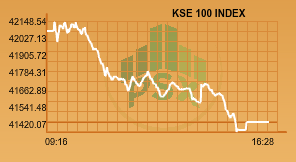 Finance Minister Ishaq Dar appeared before an accountability court in Islamabad for the seventh time on Monday, as his trial resumed in the reference filed by the National Accountability Bureau (NAB).

The Rupee’s downside continues. In the domestic currency market, no major development was witnessed last week week macro-economic indicators. However, some improvement was seen in the country’s forex reserves after the government reportedly borrowed $450 million on a short-term facility from a Credit Suisse led consortium of commercial banks.

But widening trade deficit and rising debt servicing is weighing on the country’s forex reserves and exerting pressure on the rupee.

Pioneer Cement Limited Net Sales for the period decreased by 3.32% (Cement +11%, Clinker -53%), amounting to a total of 3.4 billion Rupees during the quarter ended September, 30th 2017. Company’s Distribution Costs witnessed a 105% increase during the period under review.

The profit after tax for the period decreased 40.6% reaching 417 million compared to same year last year’s profit of 702 million Rupees. The company’s earnings per share reached 1.84 Rupees, down by 40.6% from 3.09/share last year.

Engro Powergen Qadirpur Ltd net sales for the period increased by 8.5%, amounting to a total of 8.79 billion Rupees during the Quarter ended September, 30th 2017

Company’s Gross Profit increased by 14.45%. Profit after tax for the period increased 21.35% reaching 1.8 billion compared to same period last year’s profit of 1.5 billion Rupees. The company’s earnings per share reached 5.72 Rupees, up by 21% from last year.

All shares index had a traded volume of 153 million shares Overall, stocks of 354 companies were traded on the exchange, of which 93 gained in value, 239 declined and 22 remained unchanged. In KSE 100 64 million shares were traded with a net worth of just Rs. 6.3 billion. 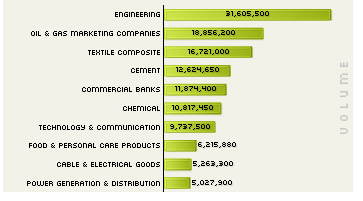 After losing a quarter of its value in five months as the prime minister was ousted over corruption charges and the current-account deficit ballooned, Pakistan’s stock market is starting to look cheap to foreign funds.

Pakistan’s current-account deficit more than doubled to $12.1 billion in the year through June and its foreign-exchange reserves have fallen 15 percent to $19.8 billion so far in 2017, fueling speculation that the country will need to devalue the rupee.