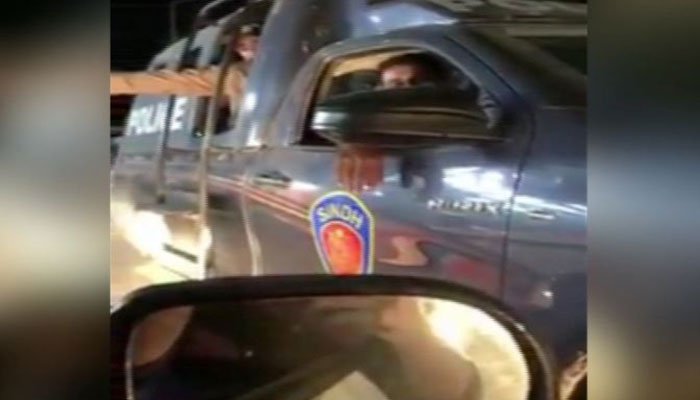 A young citizen of Karachi caught Police officers red-handed while breaking the law. What came next is no surprise, reports tell the man was brutally beaten up by the officers.

The video revealed how the two policemen were traveling on the wrong side of the road near Safoora Chowrangi in Karachi when the young man confronted them.

While confronting the policemen, the young man made sure to make a video. The man blamd the officials for the deteriorating condition of the country when he confronted them.

The man claimed that as a result of his protest, he was beaten up by the cops.

Action Against the Cops

The video was soon aired publicly on news channels, followed by a suspension of the two policemen as confirmed by SSP Malir Rao Anwar. He further added that an inquiry against them is under way.

Recently, another such incident occurred in Hyderabad when two lawmen were found guilty of breaking the law.

The two policemen faced suspension after they were found guilty of extortion of money from the laborers.

Sources reveal that the accusations surfaced as a result of the incident that took place in the Preetabad area of the city when the policemen approached labourers indulged in loading seeds on a truck.

The labourers were then demanded to offer them money. Upon refusing to do so, the laborers were beaten up.

During the process, one of the labourers, Abid Malik, got injured. Malik was then taken by the police officials, but upon fainting along the way he was left at the Civil Hospital.

It was later stated by the owner of the warehouse that it was routine work for the police to victimize workers into paying them Rs. 500 daily. The two police officials have however been suspended, confirmed Hyderabad SSP Pir Mohammad Shah.