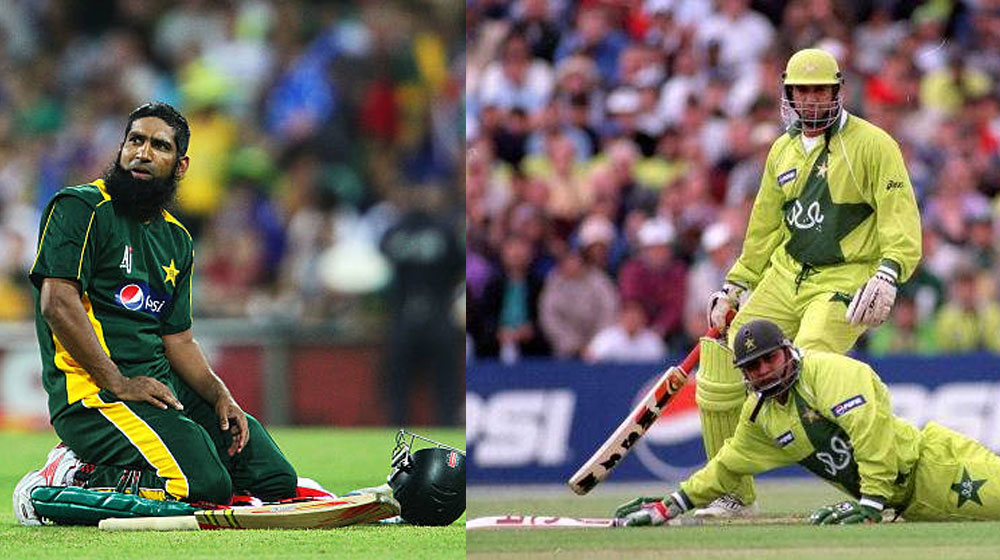 Muhammad Yousuf and Inzamam-ul-Haq, the two legends of Pakistan cricket, have given us plenty of joyous moments with their classical batting.

Having won so many matches for Pakistan, the duo has had an illustrious career, but the one thing they lacked in was their running between the wickets.

There were so many instances of ‘comedy of errors’ when the pair walked onto bat together. Their running skills made us laugh, even filled us with anger sometimes. Ok they made us angry most of the times. But when you look back at those moments, you cannot stop yourself from laughing.

And when Inzi says he doesn’t understand the run-out rule, it makes you go crazy.

And when it comes to run-outs, only few can match the former test captains. Both feature in the top 5 most run-outs list in One Day Internationals, which says volumes about their running abilities, Yousuf with his habit of haphazard quick running and Inzamam with his snail of a pace.

Recently, a video went viral where the World XI players were asked who would they choose if they had to ask someone to be a runner. The options they had were hilarious and it made them laugh very hard, and rightly so.

Mohammad Yousuf and Inzamam-ul-Haq, who wouldn’t even run for themselves, were their options.

It’s a very difficult question, if you have watched them run between the wickets – they were terrible runners and the world knows it.

He gives a big smile and goes for Mohammad Yousaf (still laughing).

Looks like the stylish batsman is winning the race, but hold on, there’s more.

New Zealand all-rounder, Grant Elliot speaks sense and goes for Inzamam-ul-Haq, saying “He knows a lot about run-outs, so he can use that experience”.

David Miller – Laughs, I have to go with Inzamam, laughs.

Darren Sammy has a hilarious answer, saying ‘Oh my God, I might be faster than both even when I’m injured’.

Finally, he can answer and its Mohammad Yousuf.

Paul Collingwood got cracked up when he knew his options, anyways, he goes for Mohammad Yousuf.

George Bailey says he might retire hurt rather than opting for either of the runners.

World XI stars have a tough choice to make as two batting legends are ready to run for them and the time is ticking by! #CricketKiHalalala pic.twitter.com/KsTS9f6XuH

Mohammad Yousuf wins 5-4, a tough win indeed. If Bailey had answered it would have been tight!

Looks like Mohammad Yousuf is a better runner than Inzamam. I guess we need to conduct a running championship for the two and find out!