Pakistan Stock Exchange witnessed a bearish session today. Although the KSE-100 Index opened positive with a gain of over 79 points in the first few hours, it failed to retain the growth and dipped by 527.47 points to close in red at 40316.93 levels. 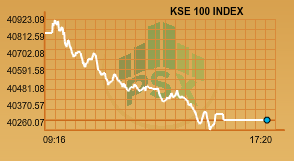 Trading activity dropped again at the stock market on Monday over the political noise and religious parties’ sit-in from Islamabad’s Faizabad Interchange.

Despite opening in the green zone, the benchmark index started falling around midday and continued the downward trajectory till the close of session. A lack of serious buyers caused a majority of stocks, especially the notable ones, to shed points.

At the PSX, the story hasn’t changed. At the start of this month, this column said it expected the benchmark index to exhibit a range-bound, bear-dominated behaviour with short-lived upward spikes due to momentary lapse of reason. In that light, there hasn’t been any surprise since then.

Daily trading volume has thinned to an average of 53 million (KSE-100) as against 72-75 million in the preceding two months, and 92 million in August 2017

The benchmark index made intraday high of 79 points during the day today. Whereas the market went down to the intraday low of  -584 points

A Major dent came from the Refinery sector as most of the scripts were in Red today. 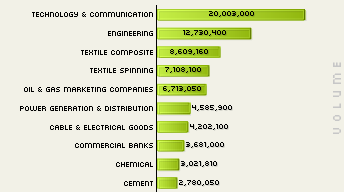