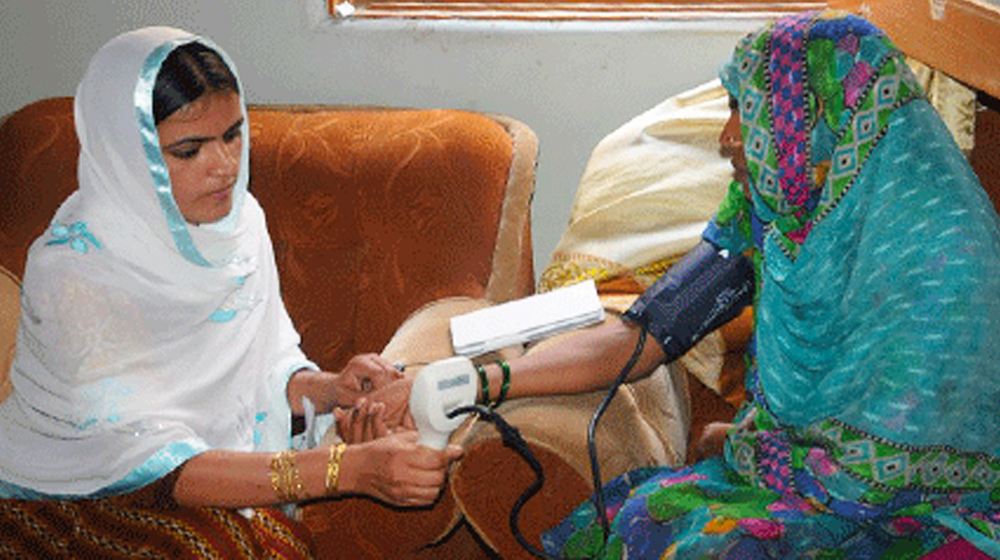 A group of 250 Lady Health Workers (LHWs) have adopted a specialized mobile app to treat pregnant women in the towns and cities of Sindh during the past three years. These workers visited 88,000 households to screen pregnant women for symptoms of a disease called as Pre-Eclampsia.

LHWs asked mothers about a variety of symptoms related to Pre-Eclampsia and also measured their blood pressure and oxygen saturation levels. This information was then entered on the spot into a smartphone mobile health application, PIERS On the Move, which conducted a quick assessment of the risk of severe Pre-Eclampsia.

Every day, lady health workers go door to door in rural and urban parts of Pakistan to provide access to basic healthcare services. They represent a vital source of health information and preventive care services that can help avert the onset of life-threatening complications caused by common pregnancy-related disorders.

LHWs were trained to provide prompt treatment by providing anti-hypertensive tablets and by administering magnesium sulfate injections. They also created awareness about antenatal care-seeking, birth preparation during pregnancy and referred at-risk mothers to nearby hospitals.

Eclampsia is a life-threatening complication of pregnancy. It is a condition that causes a pregnant woman, usually previously diagnosed with pre-eclampsia (high blood pressure and protein in the urine), to develop seizures or coma.

Pre-Eclampsia accounts for a third of all maternal deaths in the country but there remain a widespread lack of knowledge about its causes and warning signs.

“There is no word for Pre-Eclampsia in prominent regional languages like Sindhi. Unlike other childbirth complications, signs of Pre-Eclampsia cannot be identified easily which limits the chances of early detection and leaves many pregnant women vulnerable to its dangerous complications,” says Dr Rahat Qureshi, an associate professor in the department of obstetrics and gynaecology at Aga Khan University.

Faculty from the department of obstetrics and gynaecology at of Aga Khan University were involved in the CLIP (Community Level Interventions for Pre-eclampsia) trial in Pakistan. The CLIP intervention sought to evaluate the feasibility of a low cost, technology-focused approach to tackling Pre-Eclampsia and Eclampsia through lady health workers (LHWs).

Researchers noted widespread support for the initiative from the community which reached 39,444 pregnant women in the two ​districts of Sindh. Results from the trial showed a marked improvement in awareness of the disease and in health-seeking behaviour. More than three in four at-risk mothers listened to LHWs by seeking a referral and nearly 60 percent of women accepted the treatment offered by LHWs.

CLIP demonstrates how we can enable LHWs to tackle relevant health problems through training and the use of low-cost technology. Most pregnant women were willing to follow timely advice and treatment which helped make their pregnancies safer.

The research team now plans to conduct a follow-up study of LHWs involved in the program to evaluate their experiences of using technology to assess the health of pregnant women during the trial.

The objectives of the study are in line with global efforts to achieve targets under goal 3 of the Sustainable Development Goals. Goal 3: ensure healthy lives and promote well-being for all at all ages, calls for special efforts to reduce preventable deaths of mothers and newborns by 2030.

Funded by the Bill and Melinda Gates Foundation, the CLIP trial in Pakistan was conducted in partnership with faculty from the University of British Columbia in Canada and St George’s, University of London, in the United Kingdom. It is part of a multi-county study that conducted similar interventions in India, Nigeria and Mozambique.