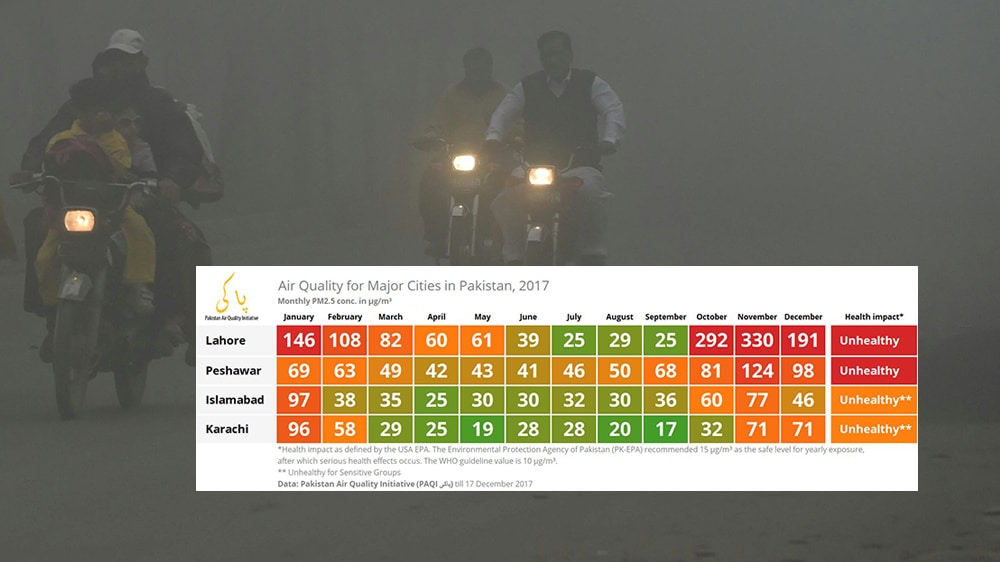 By now, anyone living in Pakistan would be fully aware of the fact that air pollution has become a serious problem here. Health hazards due to pollution have become a yearly ritual in Pakistan with major cities like Lahore, Peshawar, and Karachi facing heavy smog in the last quarter of every year and endangering a lot of lives.

Air pollution levels have risen once again after the periodic rain showers brought some respite for the residents of the country. According to the data published by Pakistan Air Quality Initiative (PAQI), (Fine Particulate Matter) PM2.5 values for Lahore in October, November, and December were 292, 330, and 191, respectively which are poor according to Lahore High Court’s (LHC) Smog Health Emergency Action Plan.

Lahore is followed by Peshawar having PM2.5 values of 81, 124, and 98, respectively in the last three months of 2017. The air quality for Islamabad with values 60, 77, and 46, and Karachi with values 32, 71, and 71, in October, November, and December, respectively, has also been regarded as “unhealthy” in the PAQI’s preliminary data results for 2017. The report said that air in the months of October, November, and December is affected by crop reside burning and temperature inversion in Punjab.

Guide: Here’s How to Drive Safely in Smog & Avoid Accidents Like the One in India