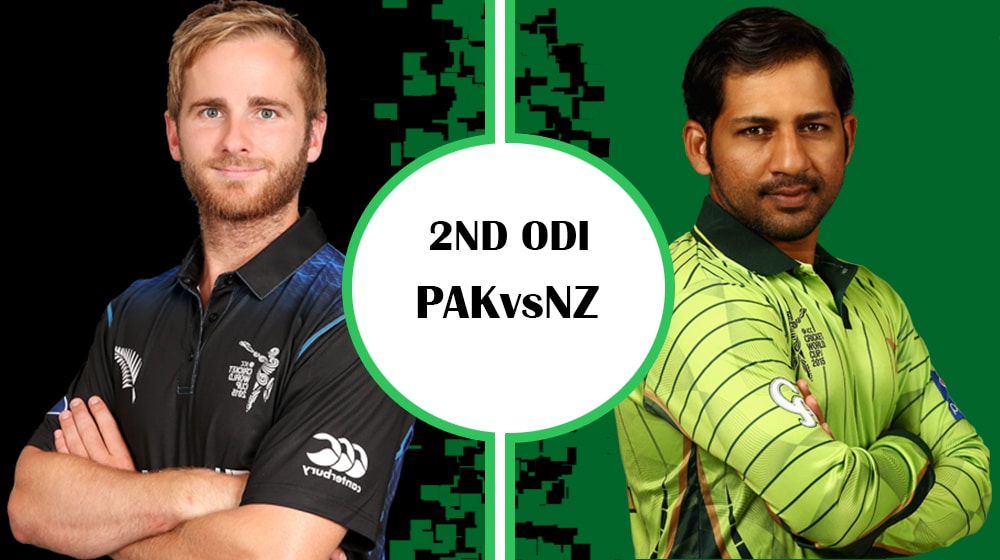 Pakistan didn’t get to a start they expected in the series against New Zealand. The clinical Black Caps and a Kane Williamson masterclass thrashed Pakistan in first ODI by 61 runs in a rain-hit game.

Pakistan are hoping to turn things their way in the second game by getting New Zealand openers out early in the innings.

Venue: 2nd ODI will be played at Saxton Oval in Nelson. Rain is expected to hit the game at intervals, we might see D/L method again in play. Pitch at Nelson is always slow so spinners will get a little help from it.

Television: PTV Sports will be broadcasting the match live for Pakistani viewers.

Both teams are expected to land the same playing XI as the first ODI. We will have to wait until the match day to hear official news. Here is an expected playing XI from both sides.

Records at the Pitch

New Zealand will enter the match as favorites as they have only lost one match at this venue since 2014 while winning 4.

New Zealand will start the game with added confidence of winning series opener and having a great record at Nelson cricket ground. Pakistan are expected to put up a good fight however they don’t have much experience of playing at this venue.

Overall, Pakistan have won last four of their 5 ODI matches with New Zealand matching the same record. Pakistan are yet to record a victory against New Zealand in New Zealand since the series played in 2010/11 series where Pakistan won the 6-match series 3-2.

Pakistan’s bowling coach Azhar Mehmood talked to media and expressed his confidence in team’s pace attack. Azhar made it clear that Zealanders need to stay sharp because Pakistanis will be coming all out, he said;

Both [Guptill and Munro] are in great form and playing well. We need to get them out early. We will bowl to get wickets, Munro likes hitting. Guptill is a [great] batsman, takes his time. We will aim to get them out.

Azhar added that Pakistan will fight till the last ball even if they don’t get early wickets, the coach said;

I have complete faith in our bowling. Our bowlers can take wickets [at any point in the match]. The new ball will also be key. Our bowling is strong and we will perform [better] in the next match.

The bowling coach also showed sportsman spirit by applauding New Zealand’s performance which ended Pakistan’s 9-match winning streak with a neat display. He seemed a bit frustrated about rain too, the coach added;

It was obviously frustrating. But rain wasn’t in our control. Credit to New Zealand, who played really well.

When asked about whether the conditions and New Zealand team have been the most difficult task team Pakistan has faced, Azhar told that;

No doubt, New Zealand are a very good team. But we have defeated top teams [in the past], we are capable of beating very good sides.

Bowling coach also commented on Pakistan’s poor display of fielding in first ODI played on 6th Jan. He was frustrated while talking about Williamson’s dropped catch, he said;

A class player like him, if he gets a chance then obviously it will create difficulties for us.

Kane Williamson isn’t letting victory in first match take his mind off of the second one, he says;

They do have a good attack all round, they complement each other well and they’re a well balanced side, much like ourselves. It is a tough series and it’s important we’re good again in the next [ODI].

Pakistan will have a fair chance of winning if they perform well in the field.