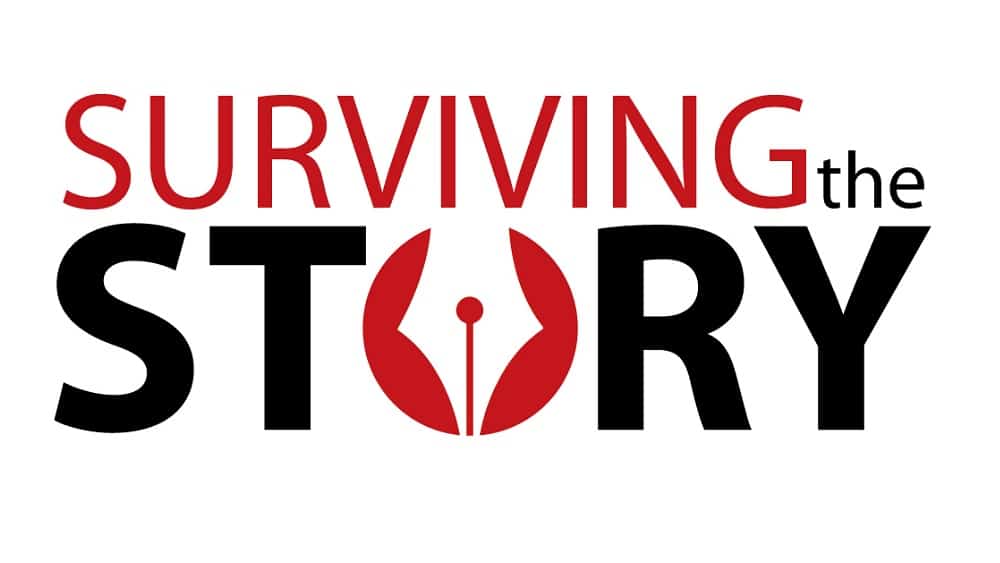 The documentary focuses on the difficulties journalists face in Pakistan which are often overlooked.

The government should partner with media organizations to encourage and institutionalize life and health insurances for journalists. This aspect was a key recommendation of the Field Study Report and the Documentary ‘Surviving the Story’, which launched at the National Press Club (NPC) on Monday.

The report and the documentary have been jointly produced by Communications Research Strategies (CRS) and JournalismPakistan.com.

‘Surviving the Story’ highlights the plight of Pakistani journalists and their families in the wake of serious financial, security and professional challenges faced by them.

Khyber Pakhtunkhwa has been the area of focus for this report and documentary as it witnessed the highest number of cases where journalists lost their lives or felt threatened to leave their profession.

The report urges all the stakeholders including professional journalists, press clubs, unions, government, media owners, civil society and international bodies to come together for streamlining media practices in Pakistan by redressing the foremost issue of financial security that the journalist community in Pakistan faces.

Those who laid down their lives in the line of duty were:

The families of these slain journalists, the documentary highlights, have received either little or no compensation.

The other five journalists who came under deadly attacks and were forced to relocate to safer areas to protect themselves and their families were:

Chairman Journalist Panel and former President National Press Club, Farooq Faisal while speaking at the occasion said the report and the documentary ‘Surviving the Story’ will be a good addition to the Resource Centre at the National Press Club, established to help build the professional capacity of the journalists.

He pointed out that journalists had not forgotten their colleagues who had lost their lives and referred to a recent addition of a Monument at NPC to honor them. He said documenting the issues related to the wider question of journalists’ security and safety was an important step for continuing to work for journalists’ rights. 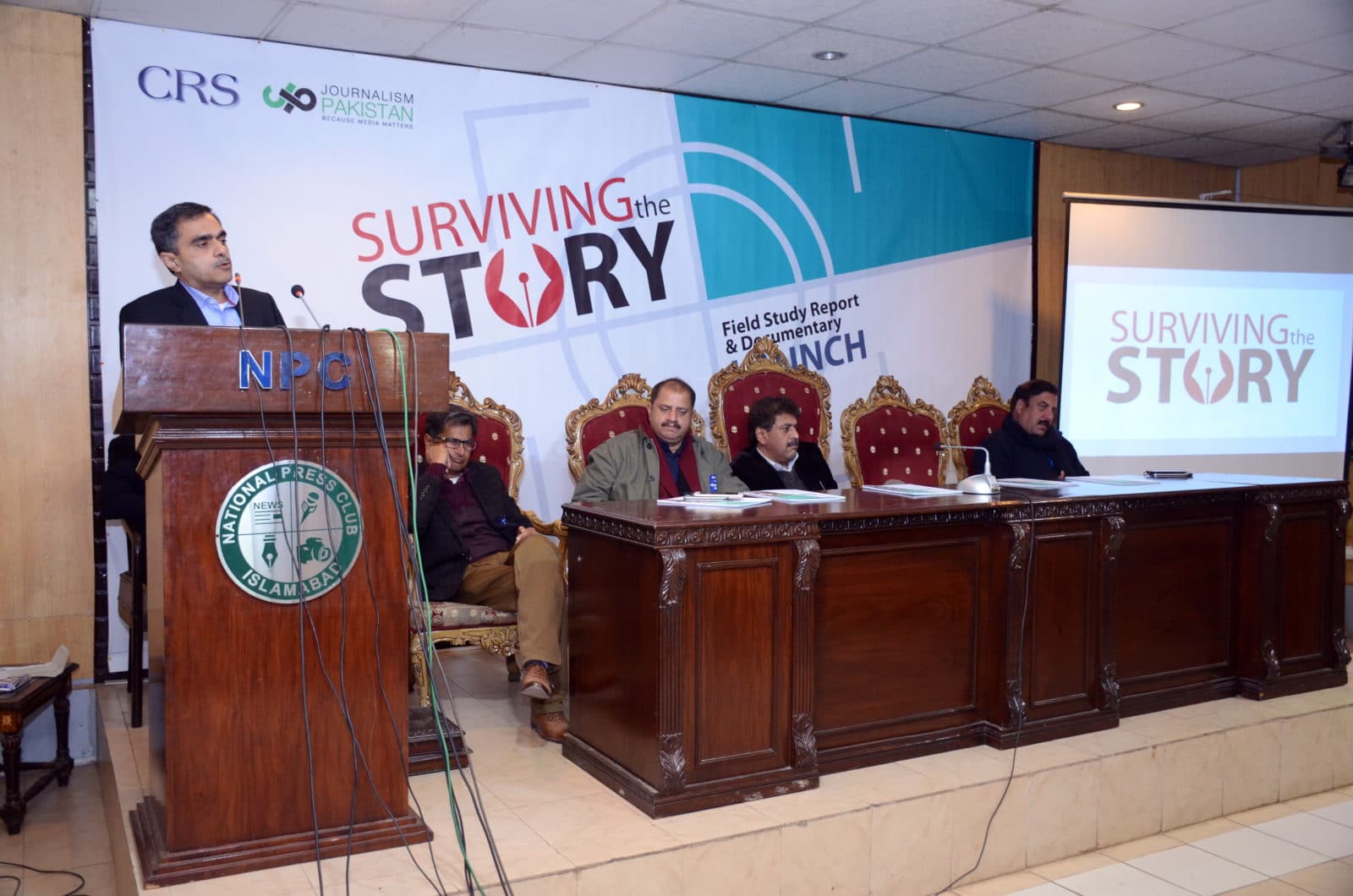 “It is painful when a journalist becomes a story,” said Aniq Zafar, Chief Executive Officer of CRSwhile addressing the launching ceremony. “It is even more painful to see that no one cares.”

Zafar said some progress has been made by training journalists on physical safety but the economic aspect remains far from hitting the spotlight.

There is no mechanism of disbursement of funds available with relevant departments and organisations, when it comes to the families of those journalists who lost their lives in pursuit of reporting the truth.

‘Surviving the Story’ aims to bring all key stakeholders together to highlight the economic aspect of journalists’ security particularly after the event of death and displacement. In the light of the report, the key recommendations would be put forth to policymakers, he said.

Myra Imran, one of the researchers behind ‘Surviving the Story’, cited relevant findings of media watchdogs, and said that Pakistan remains one of the deadliest countries in the world for journalists. 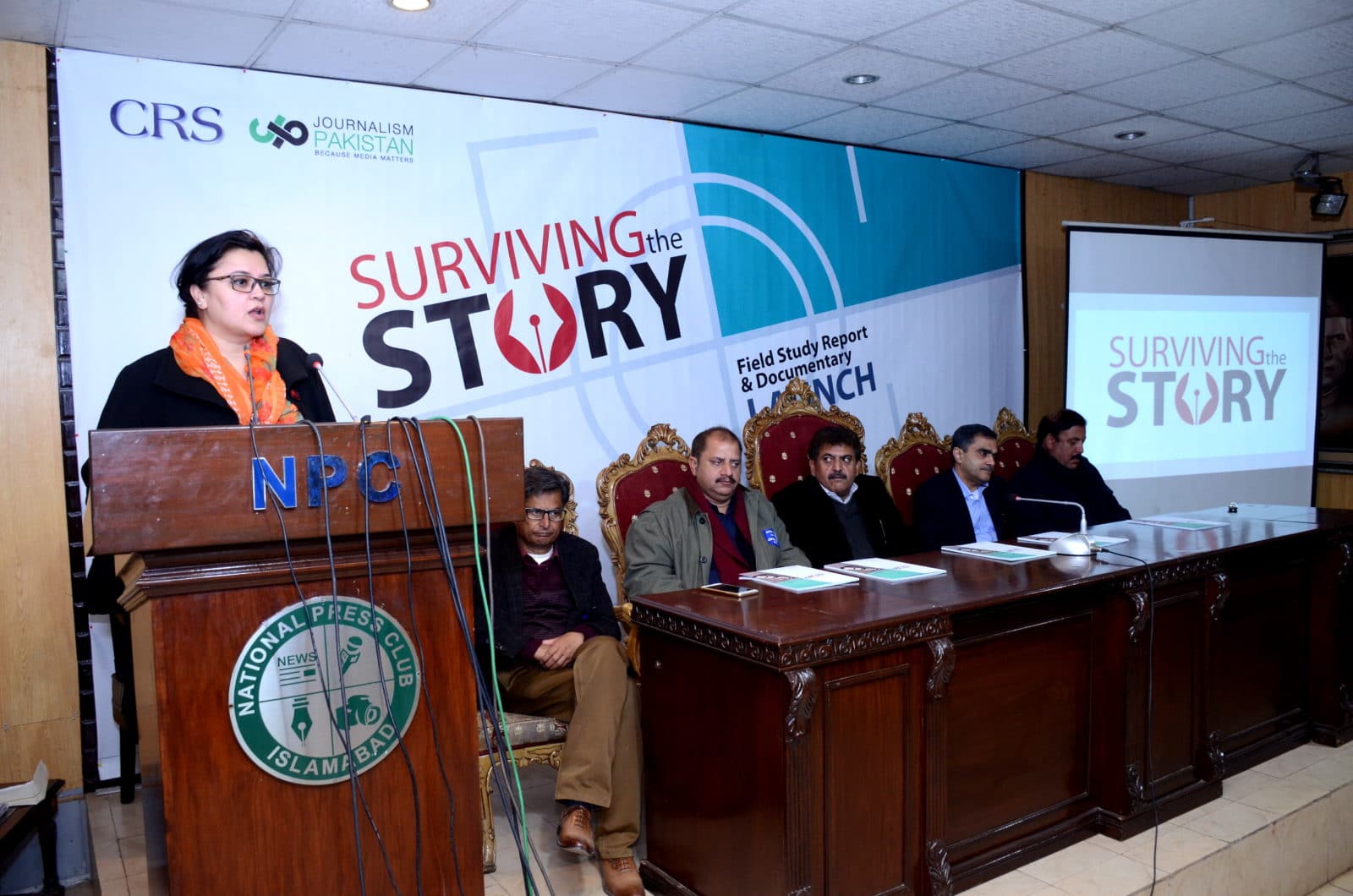 She said that 2,297 journalists were killed across the globe including 115 in Pakistan since 1990.  As many as 17 journalists were injured from December 2016 to February 2017 in various incidents while eight received verbal death threats. She also shared details from the report.

When a government employee retires or dies after remaining in service for a certain number of years, he/she is entitled to pension and other benefits. When a journalist dies or retires, there is nothing for him/her.

Anjum appreciated the efforts of CRS and JournalismPakistan.com to produce what he said is an in-depth study and an eye-opening documentary to highlight the problems of the slain and displaced journalists in Pakistan. “Together, we will defeat these challenges”, he vowed.

Afzal Butt, President Pakistan Federal Union of Journalists (PFUJ) suggested that regulatory departments like PEMRA and ABC should be empowered to bind the print and electronic media to submit insurance certificates and regular salary payment certificates of their employees at the time of the renewal of their respective licences.