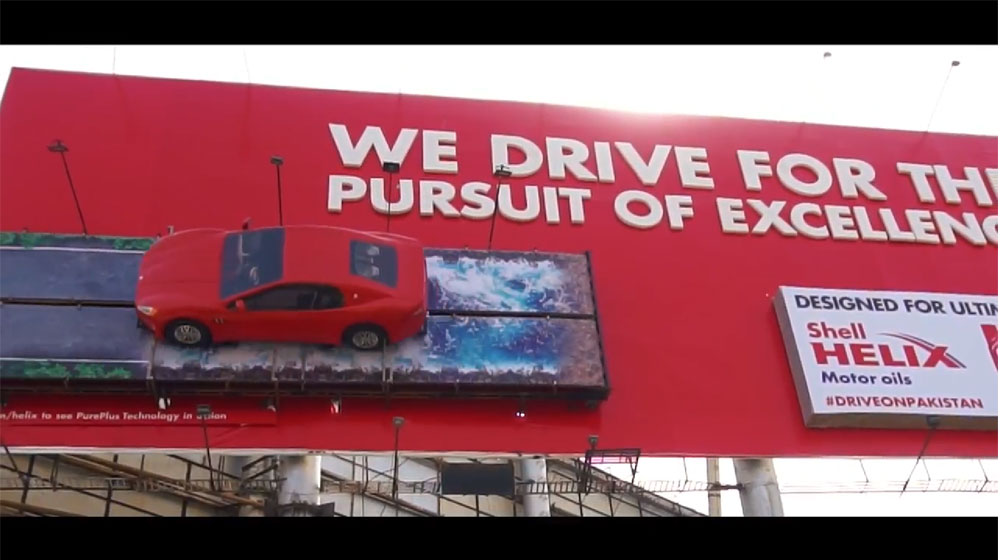 Shell Pakistan is once again coming to take over with its groundbreaking OOH campaign, with a life-sized 3D Maserati on a billboard!

One of the leading energy companies in Pakistan, Shell wants to make a huge splash in 2018 with its Shell Helix #DRIVEONPAKISTAN out of home (OOH) campaign.

Capitalizing on its successful OOH reach (thanks to a smattering of eye-catching attractions in 2017), this time around the brand is making waves for all the right reasons by displaying a large format creative billboard with a 3D life-sized Maserati for the first time in Pakistan. Yes, you read it right, a 3D and lifelike Maserati on a billboard.

A Life-Sized 3D Maserati on the Board!

As a part of Shell Pakistan’s #DRIVEONPAKISTAN out of home (OOH) campaign, Shell will be displaying huge billboards with a 3D life-sized Maserati on it.

Get ready to witness this unique idea at one of the Lahore’s busiest locations, the Sherpao Bridge. Kinetic Pakistan has displayed the Maserati model running over a rough and challenging track – a track that seems perfect for what the Shell Helix has been engineered for.

Shell has taken the #DRIVEONPAKISTAN campaign’s groundbreaking OOH to a whole new level with its new billboard. The location chosen for the board display along with its eye-catching design is one of its kind. Interestingly, the design of the billboard makes it equally visible for audiences who are on the move, be it at day and night time.

This 3D billboard isn’t only for Shell Pakistan. Kinetic Pakistan has produced many out of the box ideas for its clients in recent times, but this one has certainly raised the bar to the next level. Moreover, the campaign is being rolled out with a conventional plan as well across Karachi, Lahore, Islamabad, Multan, Quetta, Peshawar, Faisalabad and Gujranwala across key locations with an extensive reach.