Despite a decrease in weapons’ purchases, Pakistan is the 9th largest importer of weapons with India topping the list.

Pakistan has become the 9th largest importer of arms, accounting for 2.8% of total weapon imports in the world. The report was published by a Non-Government Organization (NGO) called Stockholm International Peace Research Institute (SIPRI).

China remains the top exporter of weapons to Pakistan contributing a staggering 70% share to total arms imported by Pakistan. Despite being the 9th largest importer, overall weapon imports have decreased over the course of last six years. Pakistan imported 4.9% of total weapons in the world from 2008 to 2012. This number has now come down to 2.8%.

Overall, Pakistan has seen a 36% decrease in arms imports during the past six years. The NGO states that the adverse relationship of Pakistan with the USA and increased international sanctions on the country due to its supposed lack of action against several blacklisted organizations could be the reason behind this decline.

Top 3 Exporters of Weapons to Pakistan

Here are the top three exporters of weapons to Pakistan.

China: Pakistan imports 70% of its total weapons from China.

USA: Despite the decline, USA is the 2nd largest exporter of weapons to Pakistan contributing 12% of total share.

Russia: The trade ties of Pakistan with Russia are on the rise with Russia contributing 5.7% to total weapons’ imports by Pakistan.

Pakistan recently set the military budget at $7 billion, however, weapon imports have decreased overall. Pakistan Army is also ranked the 13 strongest force in the world.

Top Exporters of Weapons in the World

Here is the list of top exporters of weapons. USA remains the top exporter with Russia and France coming in at second and third place respectively. 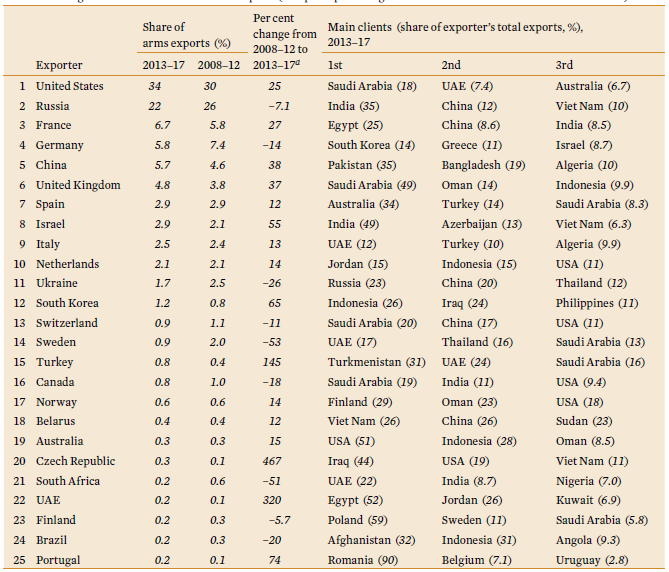 Top Importers of Weapons in the World

India remains the top importer of weapons with Saudi Arabia and Egypt at 2nd and 3rd place respectively. 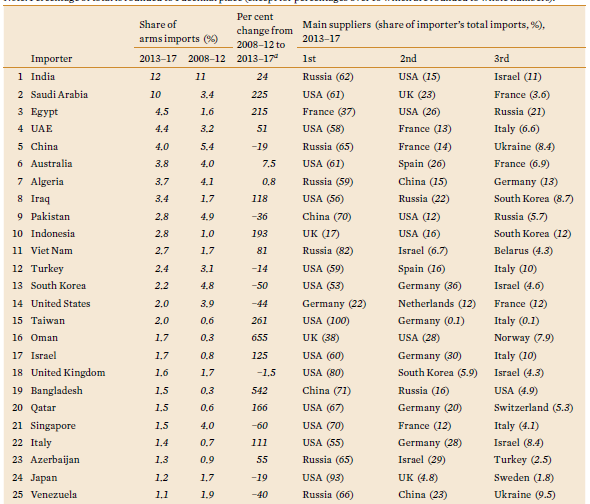 One point to consider here is that Pakistan does develop its own weapons as well. Increase in local productivity could also be one of the factors which allowed Pakistan to its decrease imports and dependency on other countries.