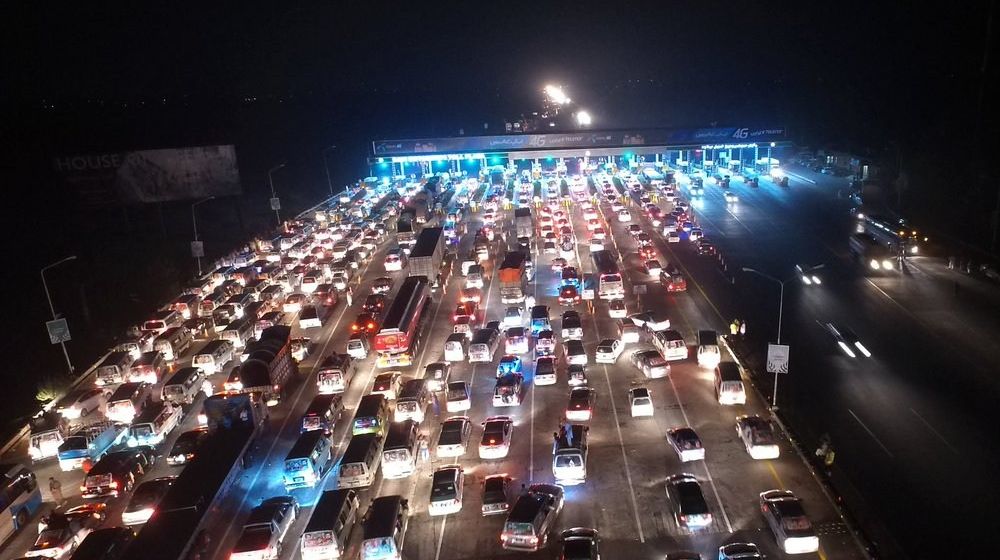 Lahore motorway interchange has been blocked by All Pakistan Mini Mazda Association.

All Pakistan Mini Mazda Association has blocked Babu Sabu interchange to stage protest against the excessive toll taxes on Bund Road and Ring Road. The Mazda drivers are demanding to abolish toll plazas that have been built on the Bund Road. Furthermore, they are asking the authorities to reduce the fee being charged on the Lahore Ring Road.

Mini Mazda drivers from all over Punjab have gathered at the interchange to demonstrate their demands. Trucks have been parked in the middle of the road resulting in the choking of the traffic.

Motorway(M2) is blocked in #Lahore due to protest by Mini Mazda Association against the increment in toll taxes. No one can enter or leave Lahore.

It has been 3 hours since the traffic started piling up and there has been no action from the government. @CMShehbaz

Hundreds of vehicles are already stuck on one of the busiest interchanges of the province which people use to enter and leave Lahore. The president of the Association says that they will continue their protest until their demands are met even if takes six months.

As of now, the traffic on the interchange is fully stagnant due to the blockage of the road near the Niazi Terminal.

The association says that the toll tax on the Ring Road has increased from Rs 35 to Rs 210 in just one year. The Association currently has two demands;

The president of the association says that they have been going to the relevant authorities for the past three months. However, no one looked at their demands seriously and took any action, the president added. This was the last option that the Mazda drivers exercised to get the attention of the authorities, the president told.

Public and general commuters are suffering the most amid all this tussle between the drivers and the authorities.