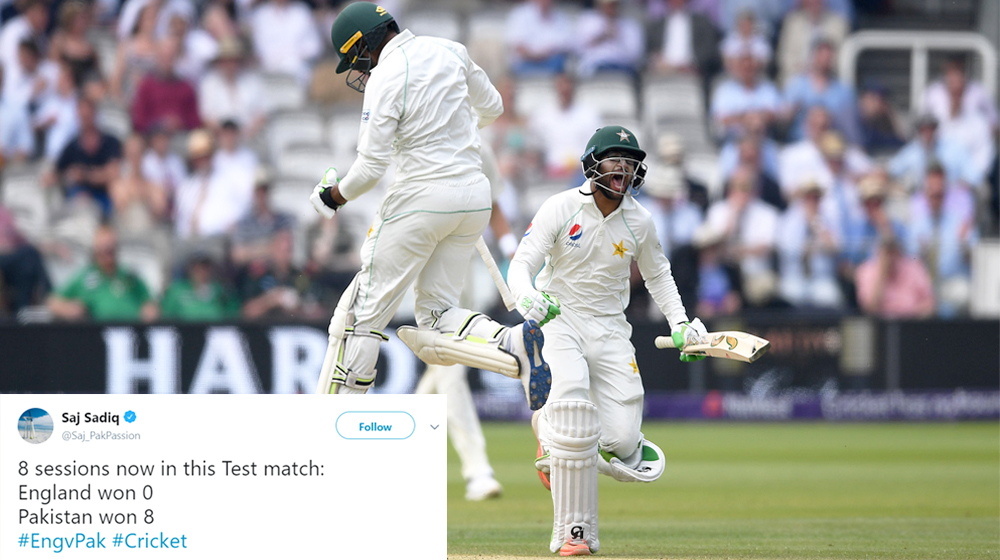 Pakistan registered a comprehensive win against England — fifth overall at Lord’s — to go 1-0 up in the two-Test match series.

After being ridiculed for selecting a young and an inexperienced side, Sarfraz has led them to a remarkable victory. The victory is special for a number of reasons: Pakistan’s recent Test record had been abysmal and a majority of the team had only played less than 5 Test matches prior to this game.

However, the drive to pull an upset and once again announce themselves as a strong contender in the Test format, Pakistan completely outperformed and dominated the English side.

Here is how everyone reacted to the promising victory by Pakistan:

Congratulations to the Pak cricket team for a great win against England at Lords. This was a team hardly any expert gave a chance of beating England & that too so comprehensively. A great team effort. Last time I landed in Karachi Pak won Champions trophy & today the Lords Test!

Comprehensive All Round Performance

Happiness is to see our team win with a comprehensive all round performance. The fact that it’s at @HomeOfCricket and against @englandcricket is next level happiness that needs a dance (after iftar). Congrats team Pakistan, so proud of you #EngvsPak #PakistanZindabad 🇵🇰 pic.twitter.com/J1zTGxoRzD

Pakistan Won Them All

Many thanks to all of you for birthday wishes but special thanks to my #TeamPakistan and @SarfarazA_54 for giving me such a wonderful birthday gift by winning #HomeOfCricket test match.Congratulations boys & @TheRealPCB.

How you will describe Pakistan performance in 3 Words Guys? #ENGvPAK pic.twitter.com/MQK9i4N018

Congrats Pakistan! We are the threads of the same green fabric, privileged to wear this bright star on our chest and heart. Pakistan all the way #NeverGiveUp #PakistanZindabad https://t.co/ufT20udjx0

Winning at @HomeOfCricket is very special. Congratulations to the team and management on the victory. Feeling so proud to see how our boys performed and really enjoyed the bowling throughout and the spirited batting by @theharissohail today #PakistanZindabad 🇵🇰

Congratulations team Pakistan on the victory against England at Lords, We played really well ,however the English team was very disappointing and played a very average game.#PAKvsEng #Lords #ShoaibAkhtar

Top team performance👏👏 Alhamdulillah historic win at #HomeOfCricket. Congratulations @Mohmmadabbas111 on MOM👏👏well done all the bowlers… and batsmen for putting up a great performance. Thanks to the whole support staff for believing in us. #LoveLords #EngvsPak @TheRealPCB

Dedicated to Those Who Believed In Us

Victory at Lord’s. This victory is dedicated to all those who believed in us. Proud of this team. We fight for each others like brothers. #PakistanZindabad. Keep supporting us, keep praying for us pic.twitter.com/ryos3ybuVE

Abbas,Amir & Hasan Ali bowling this week is as good as we have seen in the UK for a long long time …. Outstanding … #EngvPak

Congratulations to the Whole Team

What a win boys 🇵🇰 many congratulations to the entire staff and the whole team. https://t.co/dWnV2rra2w

Congrats to Pakistan on there thrashing of England at Lords !Pakistan were terrific in all departments. What should England do followers as they’ve been ordinary for a while now ? Are drastic changes needed ? I would open with Buttler for starters @WardyShorts @MichaelVaughan

Ours Was The Victory!

Congratulations Pakistan on a fabulous win. Most players playing for the first time in England and they have outperformed England in all departments. Very very impressive #EngvsPak

Pakistan it is … what a Cracker Jack performance.. not seen a Pakistan side play so convincingly against England in many a years! Nailed it!!

Nasser Hussain "Pakistan out-batted, out-bowled, out-fielded, out-captained, out-coached and out-thought England in every single department. So much so, that if you had just turned up this week, you'd say Pakistan were the home side" #ENGvPAK

Meanwhile Pakistan have been outstanding in this Test. And England has only looked a pale shadow of their past @HomeOfCricket

Proud Moment For All Pakistan

Team Pakistan outclass England at #LORDS by their skills & all basics of the game , Pakistan team won most the sessions in this test match , so we won the Test match , Proud moment for all Pakistan 🇵🇰 cricket fans 👏🏼👏🏼👏🏼, Stay United & Achieve more

We congratulate Pakistan on a splendid victory and hope the Green shirts can win the second and final Test match of the series as well.