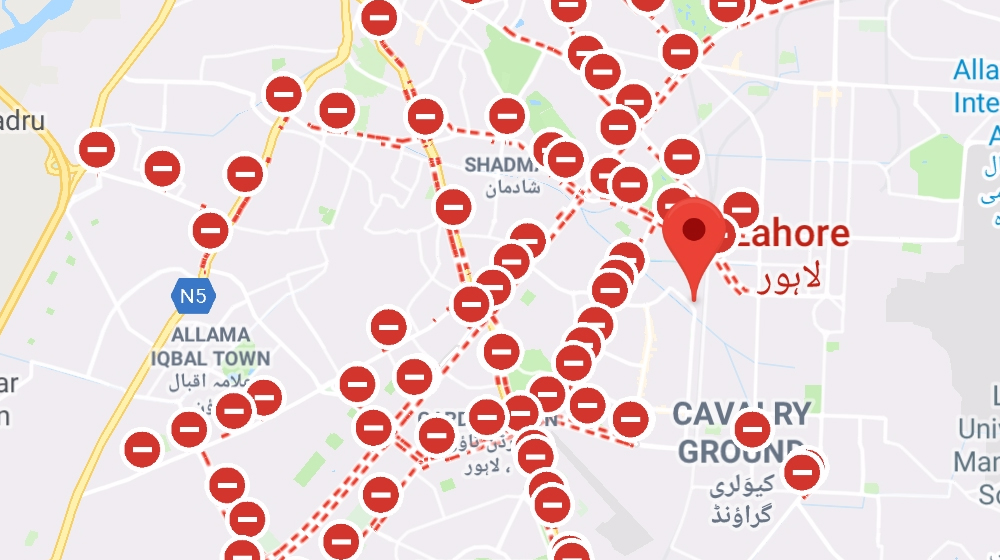 The Google Maps screenshot on social media does not show the real situation in the city.

Lahore is in a state of chaos today, given the arrival of ex-PM Nawaz and his daughter who were found guilty in the Avenfield Apartments case.

The authorities have increased security throughout the city and even placed blockades to control angry protesters. The area surrounding Lahore Airport and its immediate vicinity are cordoned off. The police are also blocking access to Abdullah Gul interchange near Lahore Ring Road – that leads to the airport – and also tightened security on other roads in the area.

If you check Google Maps right now, you will be see red signs everywhere that are usually placed on blocked roads. Screenshots of the current situation of Google Maps are already circulating social networks. Here’s what they look like right now:

At first glance, it looks like the entire metropolitan city has been blocked, with not even a single road leading out of it. However, in reality, that’s not really the case.

You see, for situations like this, Google Maps usually requires information from locals, so that they can report roadblocks and warn other users in the area to avoid certain places. Whenever somebody reports a roadblock at their particular location, the app automatically places one for others to see. So, as you might have already guessed, many Pakistanis have started spamming the service with fake blockade markings.

We have confirmation from sources within Lahore and also from people who live close to the “chaotic” areas seen on the app. Other than the areas close to the Nawaz Sharif rally and the airport, most roads are open with no traffic or blockades.

This is not the first time that online services, especially from Google, have been abused by people here. Services like Adsense and Google Map Editor were banned after they were misused. So it’s about time we realize that we do have a responsibility in this regard as well. Some of these services are free and mainly use data input by locals.

Google has already restricted many services for Pakistani citizens – and it will surely block more if we continue to misuse them. Here’s to hoping better sense prevails amongst the digital citizens of Pakistan.