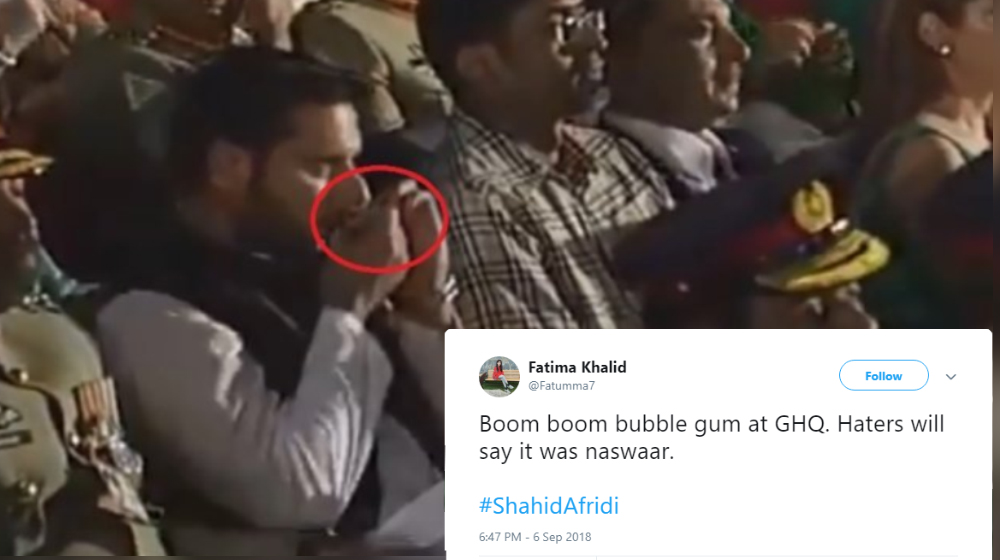 The heartthrob of Pakistan, Shahid Afridi, despite retiring from international cricket, continues to make headlines in one way or the other. This time, he was allegedly seen using the famous Naswaar during the high-profile defense day ceremony held at GHQ on September 6.

What then; what’s the fuss about? Well, social media seems to have found a hot topic for the day and everyone is busy sharing the footage showing Afridi caught in the act.

There’s no stopping the Twitterati, is there?

If “mela loot lena” had a face.

On fire? Correction … on Naswaar!

Boom boom bubble gum at GHQ. Haters will say it was naswaar. #ShahidAfridi

Level of carefreenees I want to achieve = Shahid Afridi 😂 that man was sniffing Naswaar sitting right behind the Army Chief and PM!

#ShahidAfridi made his International debut in 1996. Its 2018 now.22 years almost! All those years he was center of attraction for local and international media. And yet it tool them almost 22 years to caught him having Naswar. Maan'na paray ga lala ko.
Sahi khel gaye.#DefenceDay

After this incident , I am sure someone will launch "Afridi Naswar"#ShahidAfridi

F-16! Sits well with the defense day ceremony, doesn’t it?

There were those who were not pleased with the Twitterati slamming Lala.

Chill guys! What of he had naswar. NO BIG DEAL..
Lala we love you. #ShahidAfridi #boomboomafridi

#ShahidAfridi Naswar shouldn't be stigmatized! If Angrez would have been using it,people would have blindly followed.