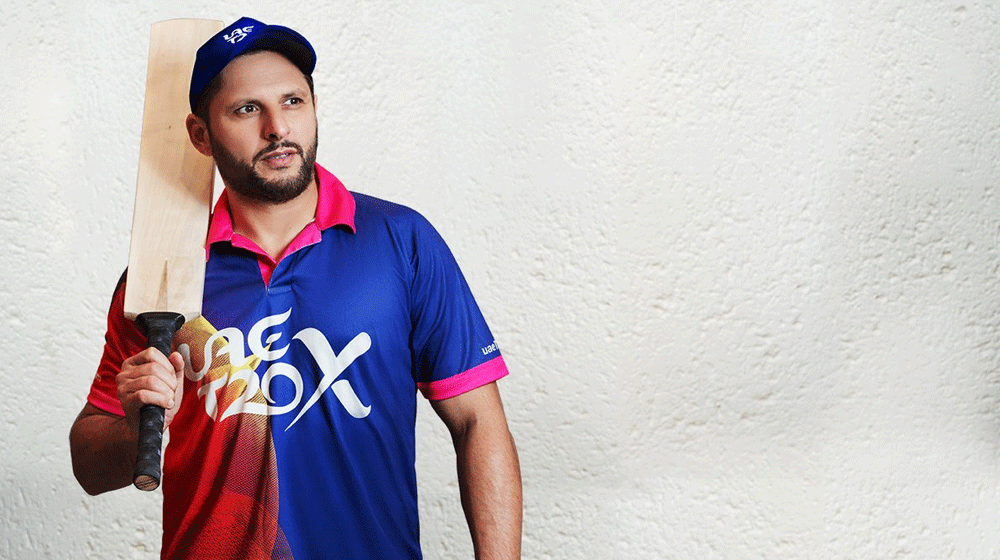 Adding another feather to his cap, and another signing to his name, Shahid Afridi will be gracing the United Arab Emirates’ (UAE) first-ever homegrown T20 league as an Icon player.

The T20 specialist confirmed his availability to the league management on Sunday after getting a No Objection Certificate (NOC) from Pakistan Cricket Board (PCB).

The league, which will start from December 19 to January 21, had Boom Boom Afridi as a fourth Icon player following Windies’ Andre Russel, England skipper Eoin Morgan and South Africa’s David Miller. Each of these cricketing greats will represent one of the five franchise teams set to take part in the league.

In his decades-long cricketing career, Afridi has always been deemed as a superstar among the cricketing fans and fraternity. He has starred in over a dozen T20 leagues around the globe, always leaving an impact on the game. Including PSL, Afridi is currently involved in over half a dozen shortest format leagues around the world, refusing to let his growing age be a problem.

At the moment of signing, Afridi said:

“T20 is a format that I’ve always loved, and that I hope to continue playing. I have come across many T20 leagues in my career, and I can really say that UAE T20x brings something new and refreshing to the table. It has been created with the players and fans in mind before anything else, and it’s modeled to give players of all levels and from a variety of backgrounds the chance to compete in an extraordinary festival of cricket.” It’s going to be very exciting for the fans, and I’m glad I get to be a part of it.”

Salman Sarwar Butt, the CEO of UAE T20x seemed to be over the moon over Afridi’s signing. On the occasion, he said,

“As UAE T20x moves into the franchise tender phase, we are delighted to be able to announce that Afridi will be joining us as a Playing Icon. We’re confident that this will be an exciting revelation for both the franchisees bidding for a team and all the fans that are excited about an international tournament coming to the region. Afridi is a stellar addition to our ever-growing roster of players, which will become the most internationally representative of any franchise league in the market.”

The UAE’s own league will feature AB de Villiers, often known as Mr 360, as its global ambassador. This league promises to be the most internationally diverse T20 league.

The potentially-lucrative league will feature five teams in its inaugural season. Each team will have a 16-player squad containing a Global Icon, 5 international, 3 ICC associate member, 3 UAE national team and 4 emerging and junior players.