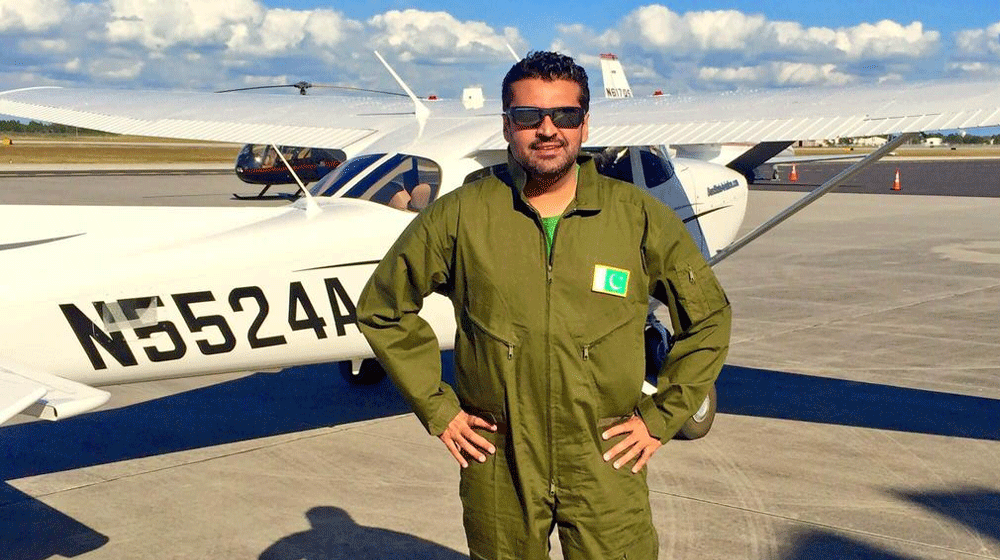 “Some childhood dreams do come true,” believes noted actor, TV host and now a pilot Fakhr-e-Alam who is set to enter his name in world’s aviation history to become the first Pakistani to go around the world in just 28 days.

“It was my childhood dream to become a pilot. For some reason, I could not do that until 2015 when I received my pilot license from the US and announced my next aim to circumnavigate around the globe. It took me three daunting years to make this happen,” said emotional Fakhr-e-Alam during a telephonic conversation with a local TV channel.

Dear all I am happy to report to you all today that after 3 years of a lot of hard work & persistence #MissionParwaaz my attempt to circumnavigate the globe is finally happening. If I succeed I will become the 1st Pakistani in the history of the world to do so. pic.twitter.com/En2NWUX0FH

“If I successfully complete this mission, which I call #MissionParwaz, I would become first-ever Pakistani in the world history to circumnavigate the globe, that too in just 28 days,” Fakhr added.

Alam dedicated his #MissionParwaz to the resilient and brave people of Pakistan.

I dedicate my Mission to the people of Pakistan. I owe it to my home country, Pakistan. I wanted to do something so that my country will always feel proud of me.

He said the journey begins on Saturday, October 6, from Florida and will go around the globe on a single-engine, solo-pilot plane with a flight mechanic to assist with technical issues.

Onboard for the long leg to Florida from #Dubai for #MissionParwaaz on my favorite home in the skies @Emirates @EmiratesSupport what a jet liner does in 14 hours I will do in 8 days. Need all your prayers and best wishes. pic.twitter.com/ZRo3psPuLf

“There are some rules for circumnavigation, you see. You have to travel as many as 2600 nautical miles, you need to fly across all the time zones in the same aircraft you started in and have to end your journey at the same venue you begin from,” explained the 42-year-old enthusiast when asked about his plans.

To a question regarding the motivation behind this crazy mission, Fakhr said he wanted Pakistan’s name in the general aviation history.

“Unlike other countries, Pakistan does not have its name in the general aviation history,” a fact Fakhr hopes to rectify. “This is my tribute to the brave soldiers and the resilient nation of Pakistan.”

Alam has a clear idea that this 28-day trip is not going to be a joyride. “Two years ago, a Pakistani father-son duo lost their lives in the Pacific Ocean while trying to achieve the same ambition, so yeah, I won’t take any unnecessary risk if the weather is bad or unfavorable for flight,” he said.

Fakhr revealed that the projection will cost him $48,000 and said he managed the fund with the support of two US companies, an American friend and the rest from his own savings.