Pakistan had a golden opportunity to fix its recurring BoP crises under the tenure of PML-N’s government. While the country was in a difficult situation in 2013, it wasn’t in a full-blown crisis.

The PML-N government had two things going for it which it failed to leverage. One, oil prices fell from $100 to $50 and two, Pakistan received a $6.6 billion IMF bailout which it completed successfully.

Oil prices are important because one-third of Pakistan’s imports are based on oil. When oil prices rise, so do the cost of imports and in the absence of increasing exports, foreign reserves dwindle and the economy comes under pressure.

Unfortunately, PML-N failed to take advantage of the situation in 2013 with measures like building up foreign exchange reserves, curbing government spending, widening the tax net and stopping money laundering, and increasing exports.

However, PML-N’s failure is only the latest in a long string.

Pakistan, the recurring balance of payment crises, and IMF have been on a merry-go-round since the late 1950s. The only concern of most Pakistani governments has been to inflate reserves to avert disaster. Fixing structural problems requires making unpopular decisions and no government has done so.

According to Ishrat Hussain,

The vested interest groups which were likely to lose out from these reforms, had strong political and economic hold on the decision making process under every elected government. They were therefore instrumental in ensuring that only some cosmetic changes were made to obtain IMF and other external financing and then go ahead with business as usual.

Now let’s take a step back now and take a complete look at Pakistan’s history with the IMF.

What is the IMF?

The International Monetary Fund (IMF) is an agency that ensures the global financial system is stable. It does so by economic surveillance, lending to countries with balance of payment (BoP) difficulties and practical help to build the capacity of its member countries.

What is an IMF Bailout?

IMF has 189 member countries and they contribute to a pool through a quota system. Countries suffering from a BoP crisis can draw from it. This is usually referred to as a “bailout”.

According to the last reported numbers in 2016, the value of this pool is over $666 billion.

What is the Balance of Payments?

The Balance of Payments is the record of all international transactions of a country (residents, government and companies) in a specific time period (usually a quarter).

Here’s what BoP practically means according to The Balance:

A country’s balance of payments tells you whether it saves enough to pay for its imports. It also reveals whether the country produces enough economic output to pay for its growth.

It’s interesting to note that a BoP deficit isn’t necessarily a bad thing.

It means that a country is importing more than it exports and it’ll have to either rely on Foreign Direct Investment or borrow money to make up the difference. The high imports could be to increase the standard of living for the population or enhance manufacturing capacity for the future, both of which will help in the long term.

However, if the trend of a deficit continues long enough, the country can end up in debt and be unable to work on future-oriented projects.

If there’s a BoP surplus, it means exports are higher than imports. Predictably, this helps fuel growth but unless there’s a sizeable domestic market, countries can become too vulnerable to exchange rate fluctuations.

Here’s a great video which explains BoP in more detail.

Why Do Countries Go to the IMF for a Bailout?

A BoP crisis occurs when a country is unable to pay for imports or repay its external debt. Usually, the local currency also declines steeply in value. This results in a spiral from which escape is very difficult. The IMF steps in to provide foreign exchange so the balance can be restored and the crisis resolved.

Programs Offered by the IMF

A country qualifies for a program depending on the required duration of the assistance, how much of the money is needed on an urgent basis and whether it has sound fundamentals and policies in place. 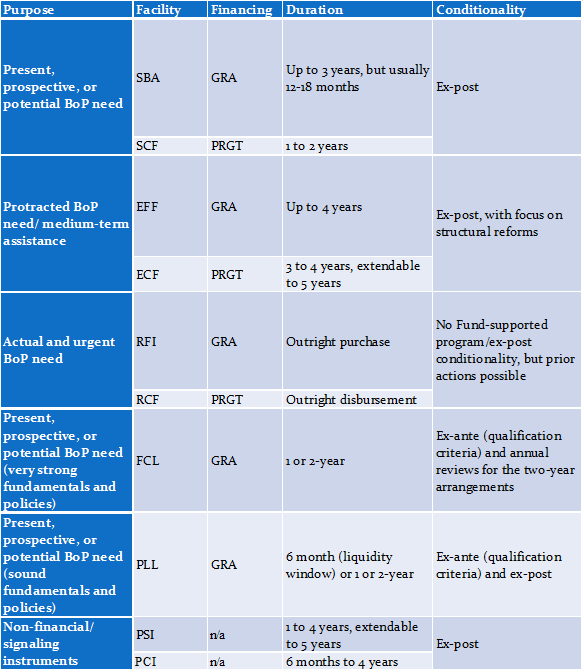 IMF bailouts come bundled with conditions which make sure that one – that the country seeking the bailout doesn’t end up in the same situation that caused it to seek a bailout in the first place and two – so that the fund isn’t depleted and other countries can avail it when a crisis hits.

While the IMF and its advocates argue that its programs and policies prevent a more severe crisis, opponents say they are designed to make countries more dependent on the IMF and end up leaving populations poorer.

Considering the fact that Pakistan has gone to the IMF 14 times since 1980, it’s easy to see why the latter camp might have a fair case.

According to a research paper by Jamil Nasir, in which he analyzes IMF programs between 1988 and 2008:

In a nutshell, IMF programs show a mixed result in the case of Pakistan. They might have provided a temporary relief but failed to bring sustainable improvement in the economy.

Political instability, harsh and standard type conditions of the Fund, and lack of ownership maybe some of the potential culprits for the failure/less effectiveness of IMF Programs.

Over the course of its 61-year history, Pakistan has gone to the IMF 21 times.

12 of these times can be classified as bailouts.

To make sense of the data below, let’s define a few important terms.

Special Drawing Rights (SDR): SDRs are an international reserve asset created by the IMF. For simplification purposes, you can think of it as the currency of the IMF with one important distinction: it’s not a claim on the IMF itself; rather, it’s a potential claim on the freely usable currencies of member countries. Its value is based on five currencies: U.S. Dollar, Euro, Chinese renminbi, Japanese yen, and British pound sterling and the basket’s composition is revised roughly every 5 years. Check latest SDR values against currencies here.

Standby Arrangement (SBA): A staple IMF program to provide aid to emerging and advanced market countries with a current or impending BoP crisis.

Extended Credit Facility (ECF): Program for countries with a prolonged BoP problem. It is a flexible and tailored program and IMF’s main tool for providing medium-term support to low-income countries.

(Amount expressed in millions of SDRs)

Some important observations on Pakistan’s loan history with the IMF: 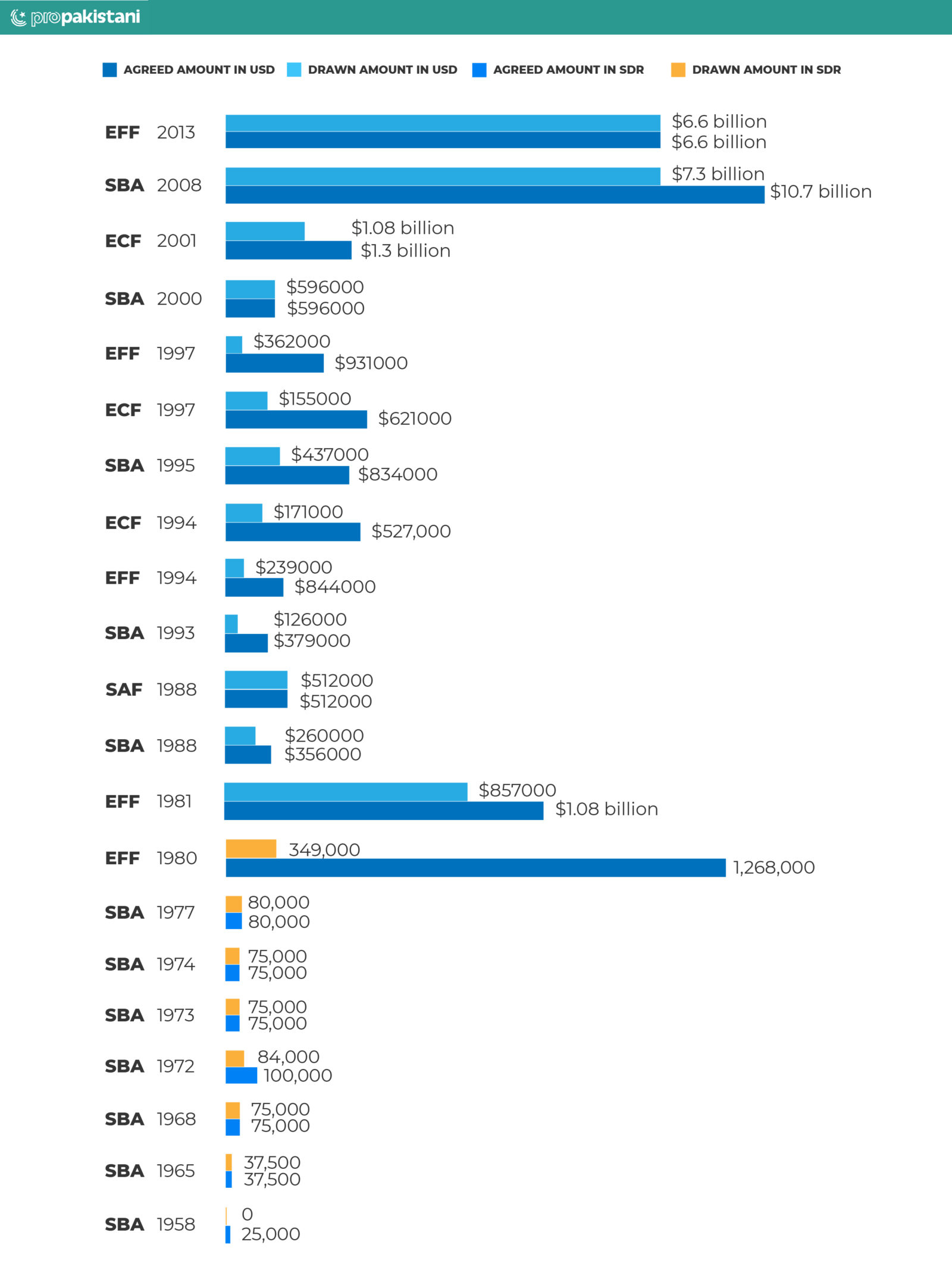