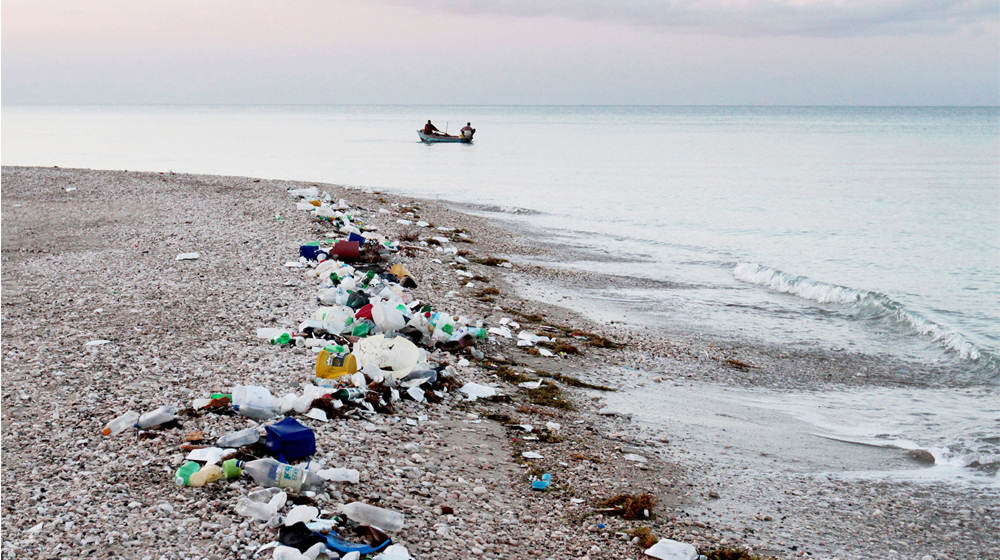 There are some things that we make sure we leave behind for our children like the financial nest egg or a property to inherit. But there is another thing that we are leaving behind which would blight the future generation, i.e. unwittingly creating a toxic legacy of plastic waste which is dumped in the seas and oceans. Due to this carelessness, we are losing the precious marine life.

The plastics that we dispose of especially on the beaches are anything but disposable in the environmental term, and take around 450 years to biodegrade. This estimate was calculated by the US’ National Oceanic and Atmospheric Administration (NOAA) and Woods Hole Sea Grant, which compiled the data showing the time frame for man-made marine debris to break down in the sea. 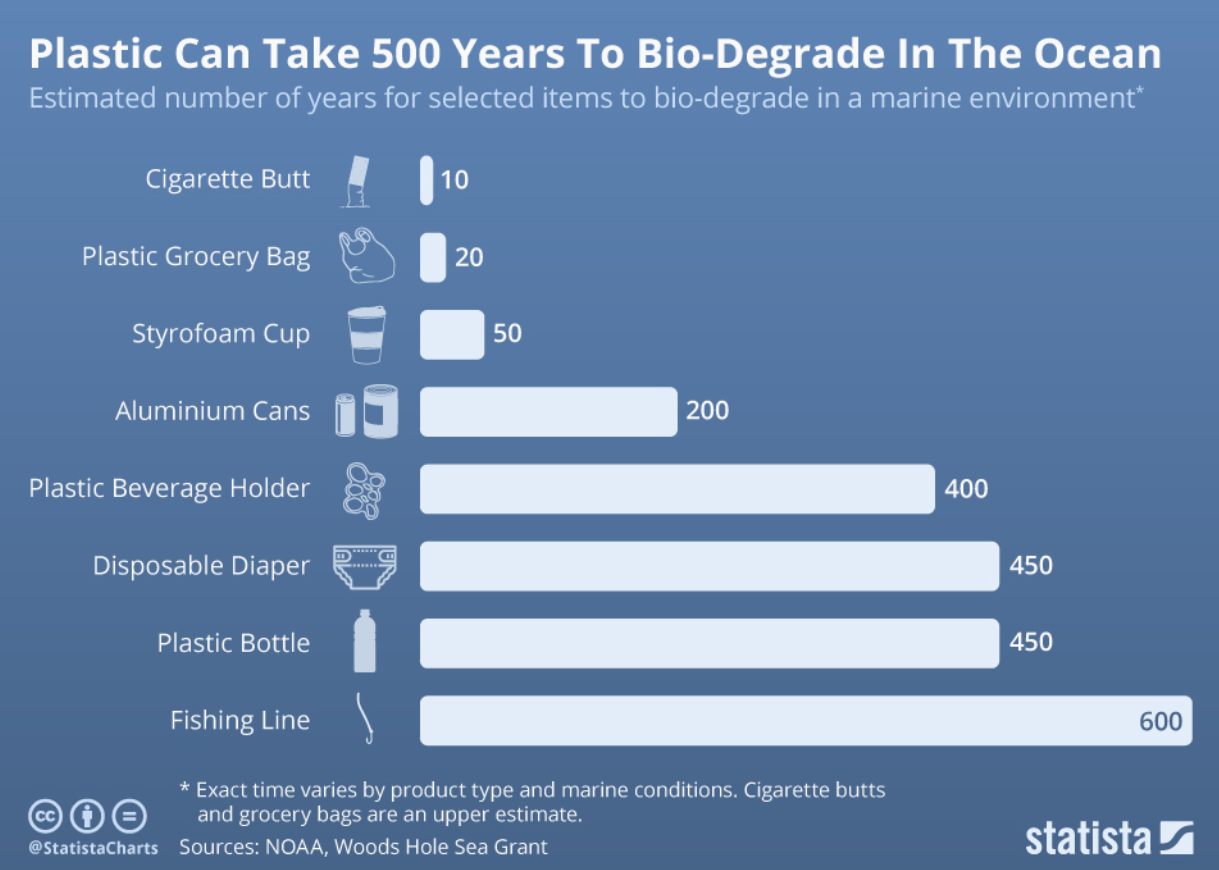 The chart above illustrates the type of plastics and the time limit it takes to degrade. The worst of them is the fishing line which takes up to 600 years to biodegrade – while disposable diapers would take a similar amount of time as the plastic bottles – 450 years – to break down.

Plastic shopping bags take up to 20 years to break down, while Styrofoam coffee cups take 50 years, and cigarette butts take 10.

The NOAA has classed marine debris as “any man-made object discarded, disposed of or abandoned that enters the coastal or marine environment”.

We May Be Consuming Plastics Without Knowing It: Report

Annually, around eight million metric tons of plastic is thrown into the ocean. It is predicted that by 2050, there will be more plastic in the ocean than fish (by weight), and once the debris is in the ocean, it can be fatal for the marine life. Recently this year, a pilot whale died off the coast of southern Thailand because it swallowed 80 plastic bags.

When the plastic further breaks down into smaller plastic called “microplastic”, it is then eaten by small fish and then those fish are consumed by humans.

It is predicted that by 2050, there will be more plastic in the ocean than fish.

Governments and organizations around the globe have begun to recognize this problem and is trying to take effective measures to resolve this. UN resolution to end plastic pollution in the sea was signed last year by around 200 countries.

The European Parliament supported a complete ban on certain single-use plastics like cotton buds, straws and plastic cutlery which might come into effect by 2021. 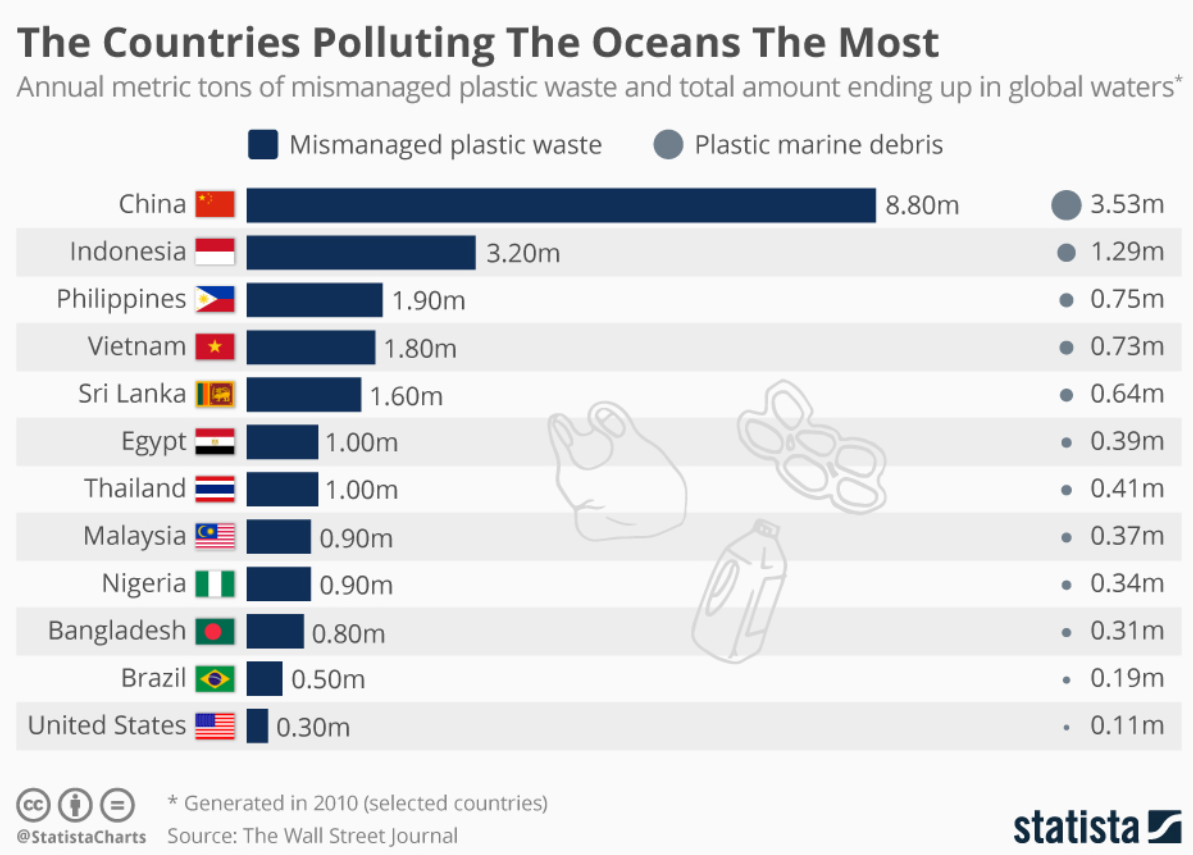 In September, the World Economic Forum launched a new partnership to put a stop to the growth of plastic pollution by 2025. The partnership is supported and funded by the UK and Canadian governments, as well as companies including The Coca-Cola Company, Dow Chemical and the PepsiCo Foundation, the Global Plastic Action Partnership (GPAP) will work with coastal countries which are battling waste.

Starting off with one of the biggest plastic polluting country, Indonesia, the GPAP will help the archipelago deliver on its plan to reduce plastic pollution by 70% for the upcoming seven years.

This movement will encourage businesses, communities and government to remake the global “take-make-dispose” economy and inhabit a circular approach to production and consumption.