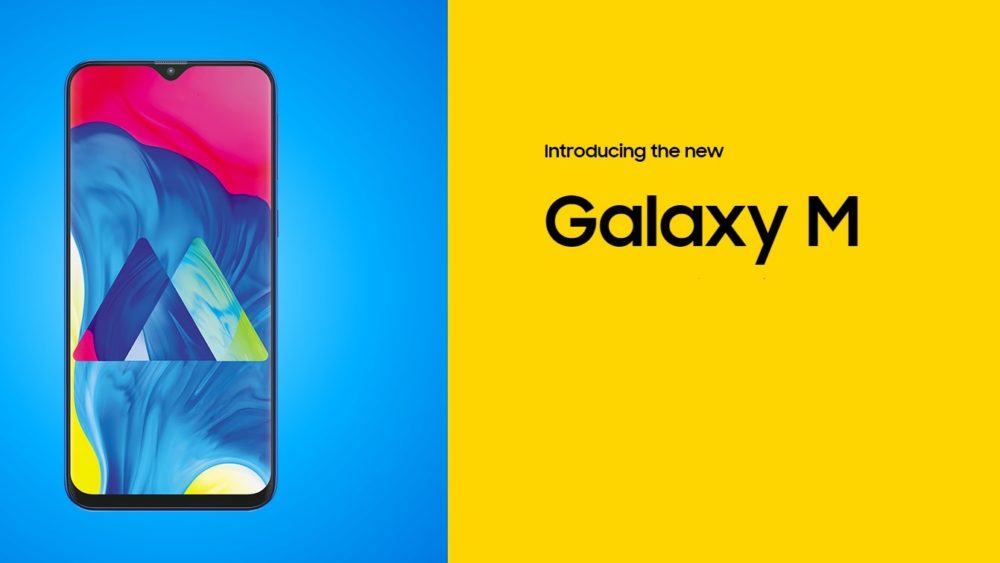 Samsung’s new M series all set to compete with smartphones from Xiaomi and Honor.

While Essential introduced the world to notch screened phones, Apple was the one that made a huge and ugly notch and made it mainstream. However, Samsung was one of the few manufacturers which avoided the silly trend. The Korean tech giant has also been supporting the 3.5mm headphone jack fans when all others have shunned the port.

Despite all this, Samsung is expected to lose market share in the coming months and the company needed something new to keep its sales going. It seems Samsung has hit the bullseye and the new series, Galaxy M10 and M20, are just what Samsung needed.

The latest M series targets the midrange market segment. It doesn’t compete with the A series or even the J series smartphone lineup from Samsung.

As the name suggests, out of the two, the M20 is the more power variant in the series.

The most prominent feature of the new M series is the fact both devices feature a waterdrop notch or as Samsung calls it the Infinity-V display.

The M10 is has a slightly smaller display with a 6.2-inch panel but the resolution really takes a hit with the M10’s display sporting just 1520×720 resolution. 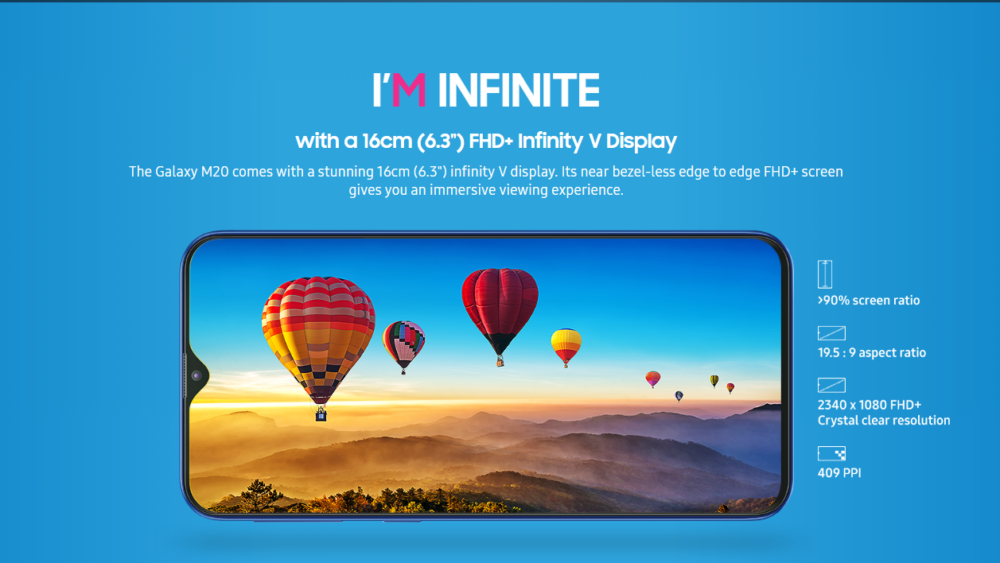 Both devices have a screen to body ratio above 90% making the bezels extremely thin. There’s an earpiece placed just above the notch with the sensors hidden in the top bezel. These are budget devices and Samsung doesn’t want them to look otherwise since you get the plain old polycarbonate back for both phones.

On the back, there’s a dual camera setup on both these devices as well as a flash. There is a fingerprint scanner on the M20 but its missing on the cheaper M10.

The M20 is powered by Samsung’s own Exynos 7904 chipset. It’s a high-end octa-core chipset clocked at 1.8GHz with four powerful A73 cores and four battery saving A53 ones.

You can get the M20 in memory configurations of either 3GB/32GB or 4GB/64GB. There’s also a dual SIM and memory card hybrid slot on both devices allowing you to expand the storage by up to 512GB.

The battery powering the M20 is a huge 5,000mAh unit and it comes with a 15W Type-C charger. Samsung claims that 10 minutes of charge will give you 11 hours of music or 3 hours of video playback. 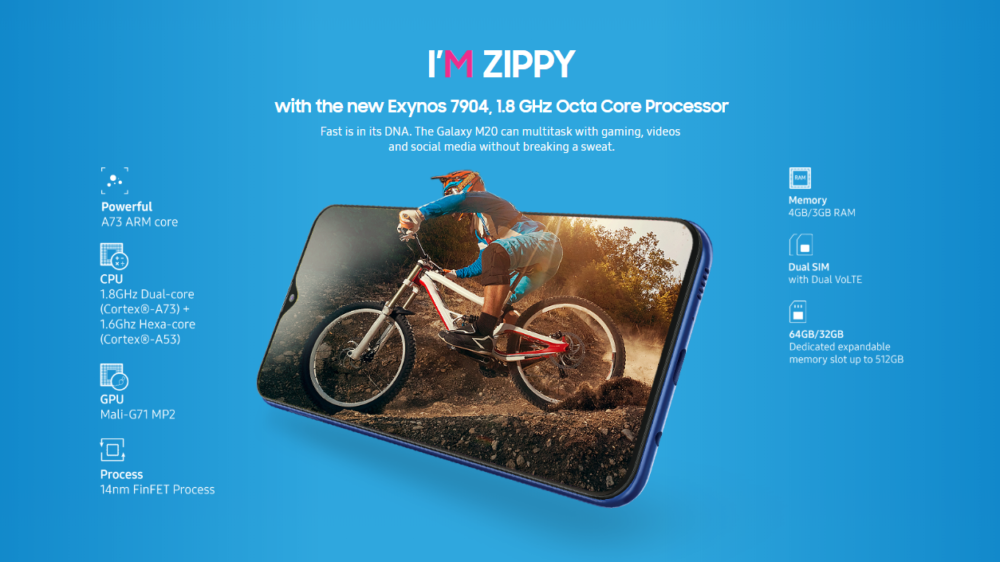 Samsung has cut some corners with the M10 and it comes with an Exynos 7870, which is an old mid-range processor and hasn’t held up well.

Memory configurations for the M10 are either a 2GB/16GB or 3GB/32GB. You can use a microSD card to expand the storage though. As for the battery, there’s a reasonable 3,430 mAh battery. There’s no fast charging and it comes with a microUSB port instead of a Type C one.

As for the cameras, the rear cameras on both models remain the same. You get a main 13MP sensor with an f/1.9 aperture and another 5MP sensor. 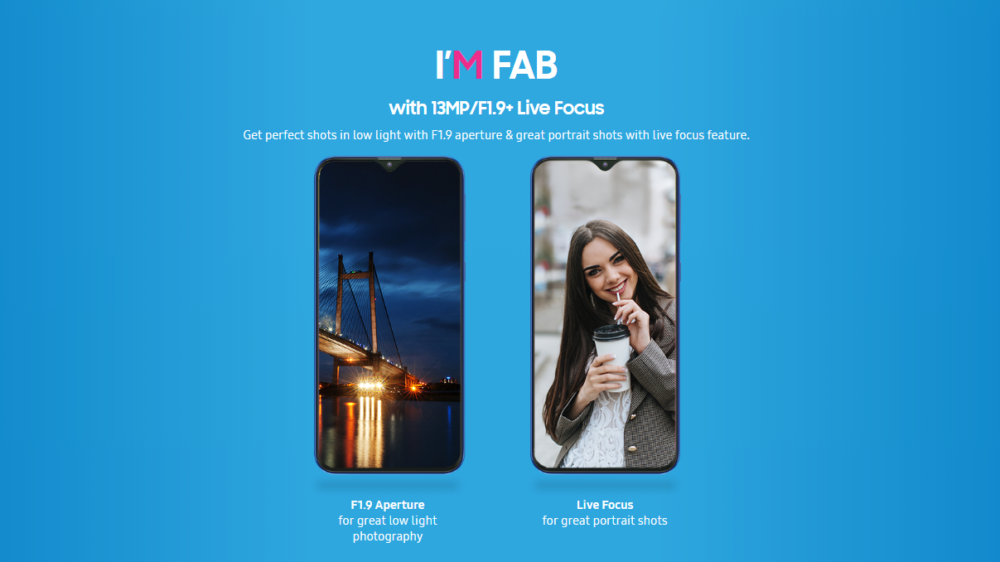 The M20 and M10 have been launched in India for now with price tags starting at $150 (~PKR 21,500) for the M20 and $112 (~PKR 16,000) for the M10. With such aggressive pricing, Samsung is taking on Oppo’s Realme sub-brand and Xiaomi’s Redmi sub-brand which offer similarly high-value phones for entry-level prices.

There’s no word as of now of the availability in Pakistan but do expect to see it launch here in the following months.