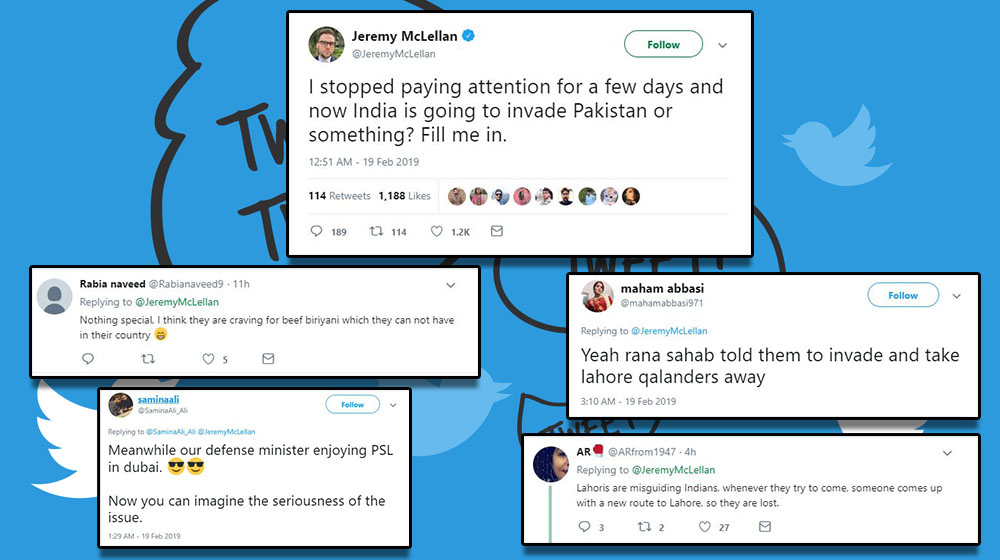 Remember the American stand-up comedian, Jeremy McLellan? Of course, you do!

Well, he’s back and India might not feel so good about it. You know why, don’t you? His love affair with Pakistani spy pigeons in India is a known phenomenon and his tweets are always loved by our fellow countrymen.

I stopped paying attention for a few days and now India is going to invade Pakistan or something? Fill me in.

The way people filled him in is nothing but hilarious. And you are going to get goosebumps, for sure.

Here are some of the funniest responses:

Shhhh!! India is rehearsing in a Bollywood studio!

Just got an update from this boy! pic.twitter.com/7xX7ZQlw3U

*Reacts to the threats*

Longer than we thought.

It took longer than we thought pic.twitter.com/w8RksSVITR

The new recruits are here.

They are getting ready for war against Pakistan 😆😆 pic.twitter.com/2J72JsSJgL

No time to waste.

We only have one day left.

#india let us know when you are ready to war. For now, let me enjoy #PSL2019 . pic.twitter.com/mvJyluDHUD

Pakistanis, dress up properly! What will Kangana Ranaut say (winks).

Our pigeons are enough.

Our spy is fully prepared 😂😂😂….. let them come pic.twitter.com/LRkKMFhYKg

The level of chill is amazing.

This sums up the current scenario.

Psl was getting popular so theu had to stop that
Modi was loosing in recent polls
Had to do something to get the patriotism going
Now they are looking for someone who died in 2007
You're all caught up now. Thank me later.

While they blame us, they have no answer for any of these questions. We condemn the attacks but if you read Kashmiri history it clear that due to failed peace talks they are taking matters into their own hands. pic.twitter.com/aeyEqZwJE5

Here’s how India is planning to invade Pakistan.

Have something to add to the post? Let us know in the comments section.