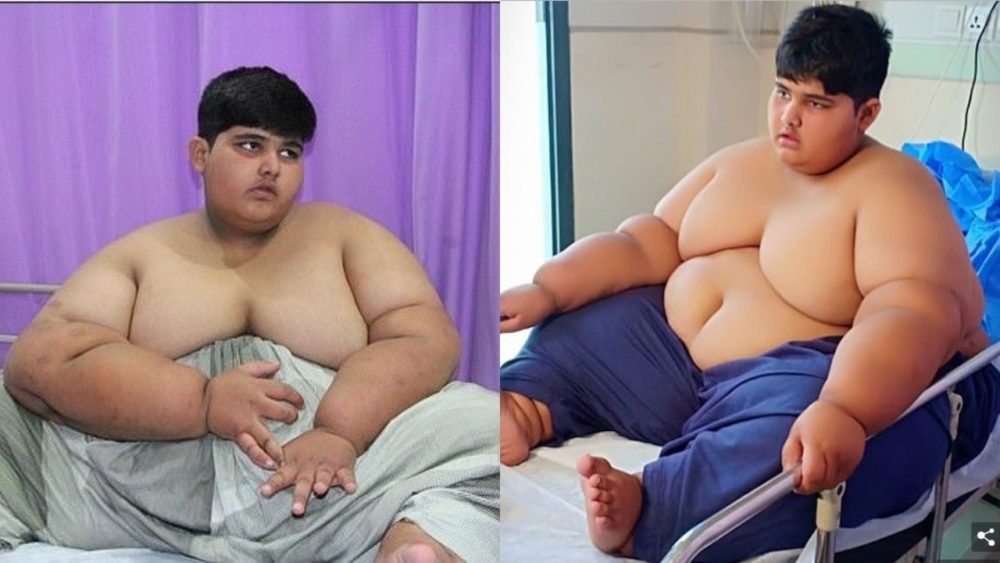 Mohammed Abrar from Pakistan is the world’s fattest child weighing at 31 stones (around 196 kg) at just 10-years old and in a bid to save his life, he will be undergoing weight loss surgery. He is unable to stand after eating his meals – which can feed four adults.

He only weighed a healthy 8lb at birth but started gaining weight rapidly, weighing 21 kg when he was 6 months old. His parents recall that he was always hungry as an infant and would drink five times more milk than his two siblings. Zareena, his mother, says a custom bed had to be made to support his weight and she alone couldn’t change his diapers; she adds,

He weighed eight pounds at birth but his weight never stopped growing. He used to drink two liters of milk when he was only two years old. It was like his stomach never filled up. He always cried for more food. It was very difficult for me to even carry him. We had to make a special swing and a bed for him to change nappies.

Due to his massive frame, every activity is an uphill battle for him and he is unable to play with his siblings nor can he go to school but his parents are hopeful that Pakistan’s best-known bariatric surgeon Dr. Maaz ul Hassan’s surgery on him could change all this.

Zareena said “We had never heard of obesity. When he was a baby, he was beautifully plump and we were proud of his frame. By the time he was six years old, he was already 15 stones and ate meals meant for four adults.”

Although his parents never fed him junk food, he would easily polish off four plates of rice or 10 chapattis with chicken curry at one go. She says,

His hunger was never satiated. Whatever I cooked, he would finish half the food and the rest of the food was eaten by five of us.

His parents consulted several doctors who recommended diets but Abrar was unable to see them through because of his appetite. Finally, they came across Dr. Maaz who informed the desperate parents about bariatric surgery – a process for weight loss that reduces the size of the stomach using a gastric band.

We struggled a lot finding the right treatment for him. We never lost hope of getting medical help. I am happy that finally Abrar will get the operation he needs to help him live a normal life. We understand that he has a disease of eating too much food and he needs to be treated differently. I am sure he will lose weight just like Dr Maaz’s other patients. I am hopeful that with proper diet and exercises and activities like swimming and sports, he will one day be a normal weight.

When he came to us he could not even take three steps at a time. He is an obese child although there is no history of obesity in his family. His parents and the two siblings are perfectly normal. He has an endless appetite and his parents said he ate a lot for his age.

On Friday (Today), a laparoscopic sleeve surgery will be performed on Abrar that will see the outer margin his stomach removed in a bid to restrict food intake. The operation will take an hour and afterward, Abrar will be fed a liquid diet of buttermilk, chicken broth, and fruit juice.