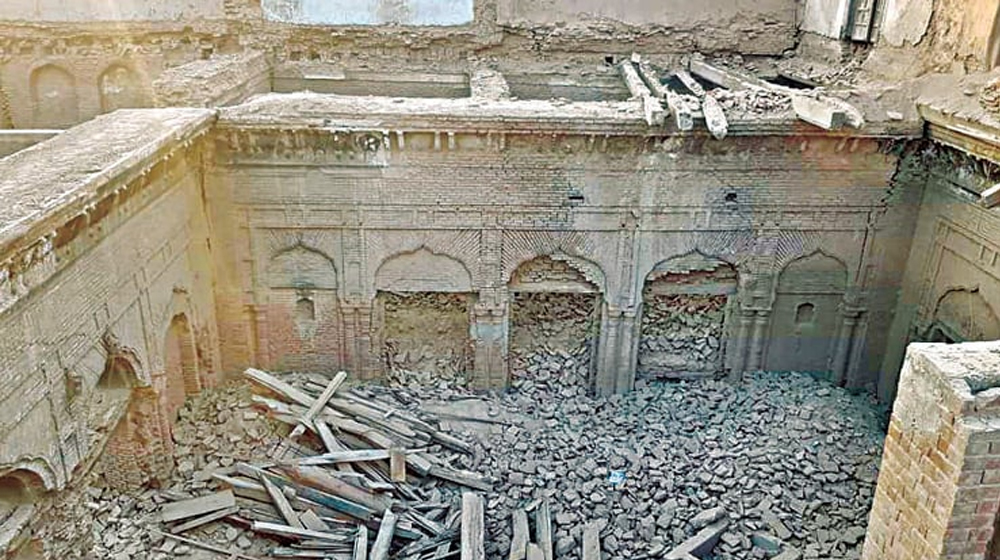 A group of people in Narowal has partially demolished the four-story, centuries-old building and has sold off its doors, windows, and ventilators.

The group partially demolished the building with the alleged connivance of Auqaf department officials. Locals report that the Auqaf department was informed about the demolition, which was carried out by influential persons. However, no action was taken and no one from the department even came to the site.

A local claims that three stories of the building have already been demolished. New houses have been constructed there. Moreover, the government departments are clueless about the ownership of the building or where its records are maintained.

Narowal Deputy Commissioner Waheed Asghar, who deals with the record of all properties in the vicinity, says, “There is no mention of this building in the revenue record. As it seemed to be historical, we are checking the municipal committee’s record.” He says that he has stopped the demolition.

Evacuee Trust Property Board’s (ETPB) Sialkot zone’s Rent Collector Rana Waheed has said that his team is investigating the Guru Nanak Mahal Bathanwala. If the palace is the property of the ETPB, the board will take legal action against those responsible.

The building seems to be constructed over four centuries ago in the village of Bathanwala. It was constructed from sand, clay, limestone, and old bricks. It comprised 16 large rooms in the building, each having at least three beautiful doors and at least four ventilators.

The rooms were airy and had large broad walls with wooden cupboards. The walls had small lamp enclosures and the doors had flowers engraved on them. The roofs had Diyar wood beams. The wood is worth thousands of rupees per foot.

The sturdy walls surrounding the building bore beautiful designs and the pictures of Baba Guru Nanak, the founder of Sikhism, along with several Hindu rulers and princes.

The locals had named this building ‘Mahalan’. A number of Sikhs from all over the world used to visit the building. Being a ‘heritage site’, the building was treasured by the foreign delegations.