Pakistan International Airlines (PIA) has repaired its grounded Boeing 777 aircraft according to the airline spokesman Mashood Tajwar. The ill-fated aircraft, with registration AP-BHV, was grounded after engine problems almost fifteen months ago.

Since then the plane was being used for spares parts to support the rest of the fleet by the engineering department, the hopes that the plane would fly again had diminished. PIA had to spend a large amount of funds and efforts to bring the aircraft back. 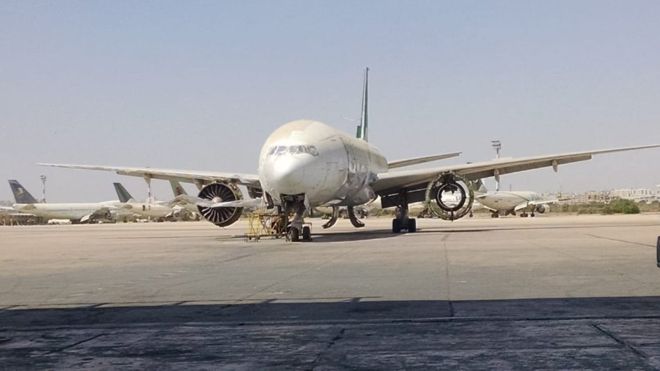 Aircraft before repairs at Jinnah International Karachi, as reported by BBC Urdu in a report on 1st Feb 2019 – BBC

After repairs, a test flight was conducted successfully from Karachi to Nawabshah and back on Thursday. Airline’s CEO Air Marshal Arshad Malik congratulated the teams and declared it as a historic and major success.

The said aircraft is a Boeing 777-340ER wide-body aircraft that was delivered to PIA in December 2006 by Boeing. After the plane was grounded, the national carrier had to dry lease more aircraft to continue flight operations smoothly.

The aircraft’s return to service is now expected soon. It is expected to take off some burden from the long haul flights to international destinations.