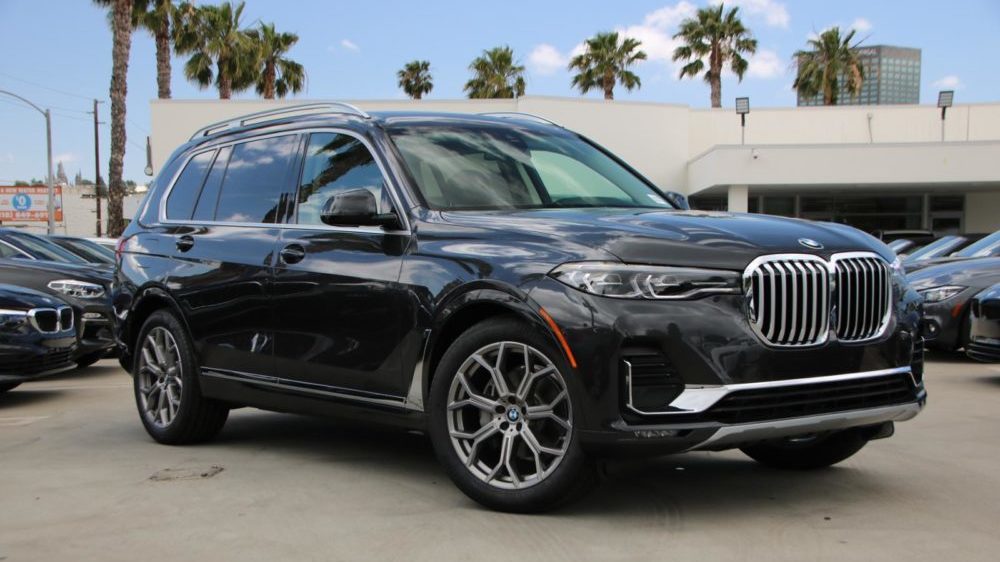 BMW’s latest luxury SUV, the X7 xDrive40i, is now available in Pakistan. The new SUV was introduced in the country by Dewan motors.

The new BMW X7’s sporty look and design help make its presence known on the road with an exclusive array of modern-day features, letting you haul up to 7 people around in style. It’s also the biggest BMW ever made.

With that out of the way, let’s go into more detail. 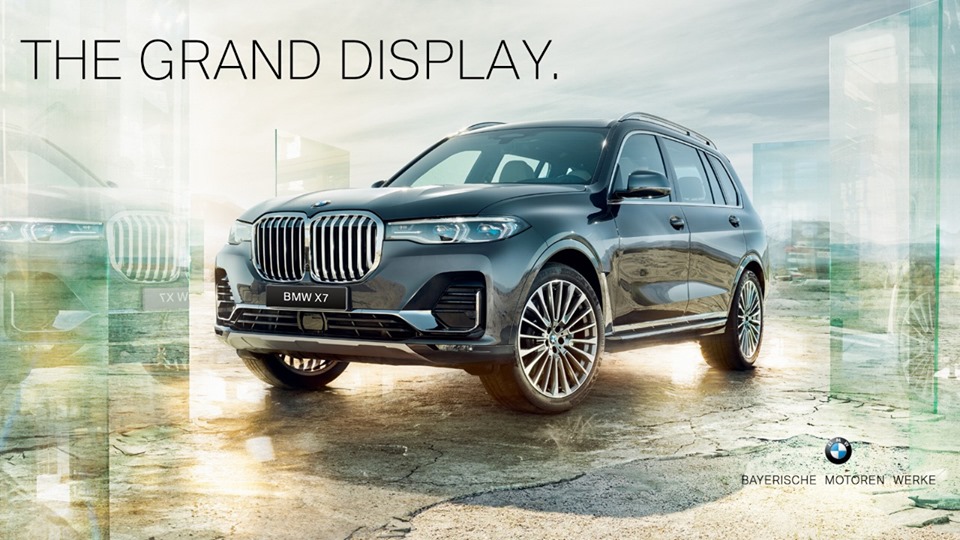 The car stands out on the road from other competitors due to its distinctive styling and imposing presence. The headlights are trademarked BMW and use laser light, encircled by a blue hue, that offers a range of up to 600 meters, two times more than an average headlight.

Over the years BMW has increased the size of its front grille on all vehicles, and the X7 is no exception. It has a massive front grille, in its signature double-kidney style, with fog lights underneath. Another design quirk is the air breather which runs along the side of the car adding another layer of decorative styling. 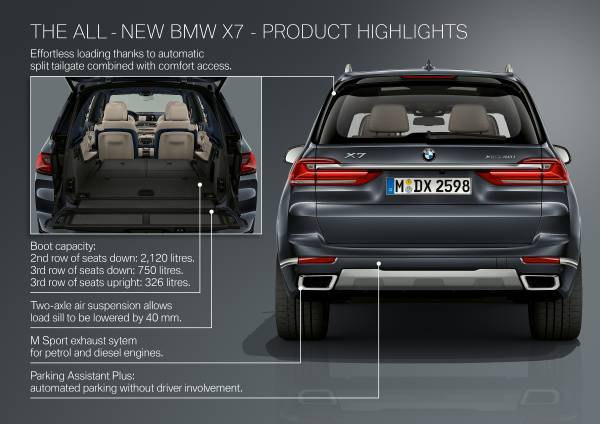 Moving over to the back, the new BMW X7 has a chrome bar placed between its tail lights. A lot of cars have been following this trend lately, using chrome accents on the back.

It has a trunk space of about 326 liters, which can be further increased by lowering 3rd row and 2nd-row seats. You can increase its trunk space up to 2,120 liters, in case you need to carry copious amounts of luggage. 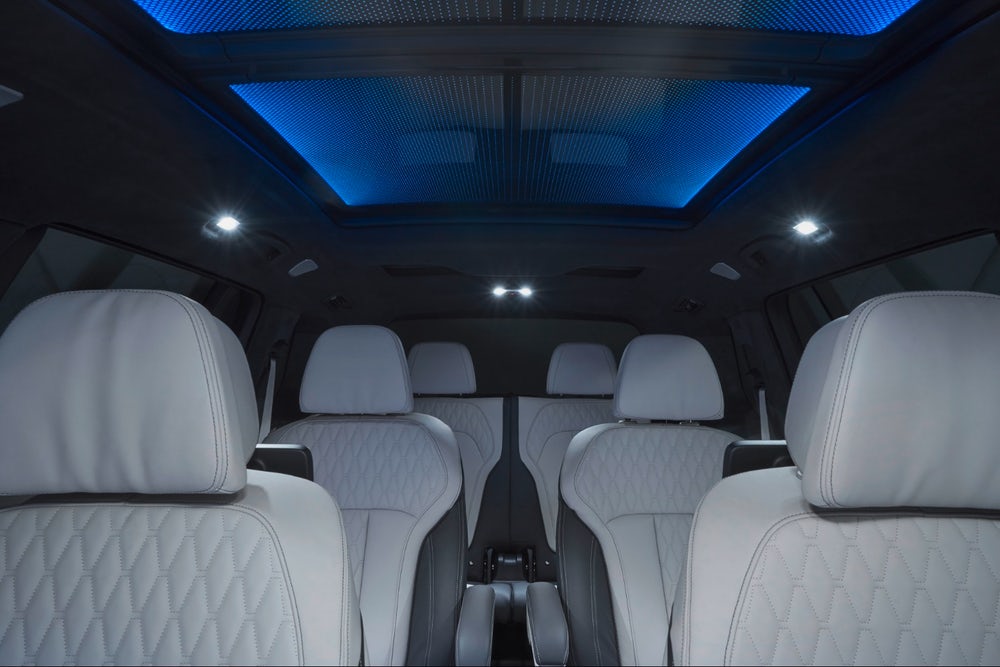 The exterior of the car is complemented by an equally luxurious looking interior, where the car welcomes you with white carpeting and leather seats. The panoramic glass roof invokes a feeling of an open-air theater with its welcoming spaciousness. Interestingly, the glass roof has light graphics which bathes the car in a soft glow, letting you choose between 6 different hues.

The X7 can seat up to seven people quite comfortably as it has three rows of seating. The second row comes with separately adjustable armrests to provide a degree of comfort to the passengers.

Moving over to the dashboard, the BMW X7 has a nice mahogany accent running from the driver’s door all the way to the passenger with leather upholstery.

The car has keyless entry, which is fast becoming standard in this tier of the car industry. BMW takes comfort to a whole new level with the center console having temperature-controlled cupholders which is a nice touch to keep your drink cold/warm.

In the entertainment corner, the BMW X7 maintains its class with a surround sound system that boasts an array of 10 speakers to provide premium sound. There’s also a 12.3-inch display with a digital infotainment system in the middle. It also comes with the BMW Live cockpit professional that provides navigation functionality imbedded in the 12.3-inch touch display.

It has automatic air-conditioning with 4-zone climate control that allows each seating row to set its own temperature. Instead of having levers for manual adjustment, the seats can be electrically adjusted – no more trying to grapple the lever haplessly. 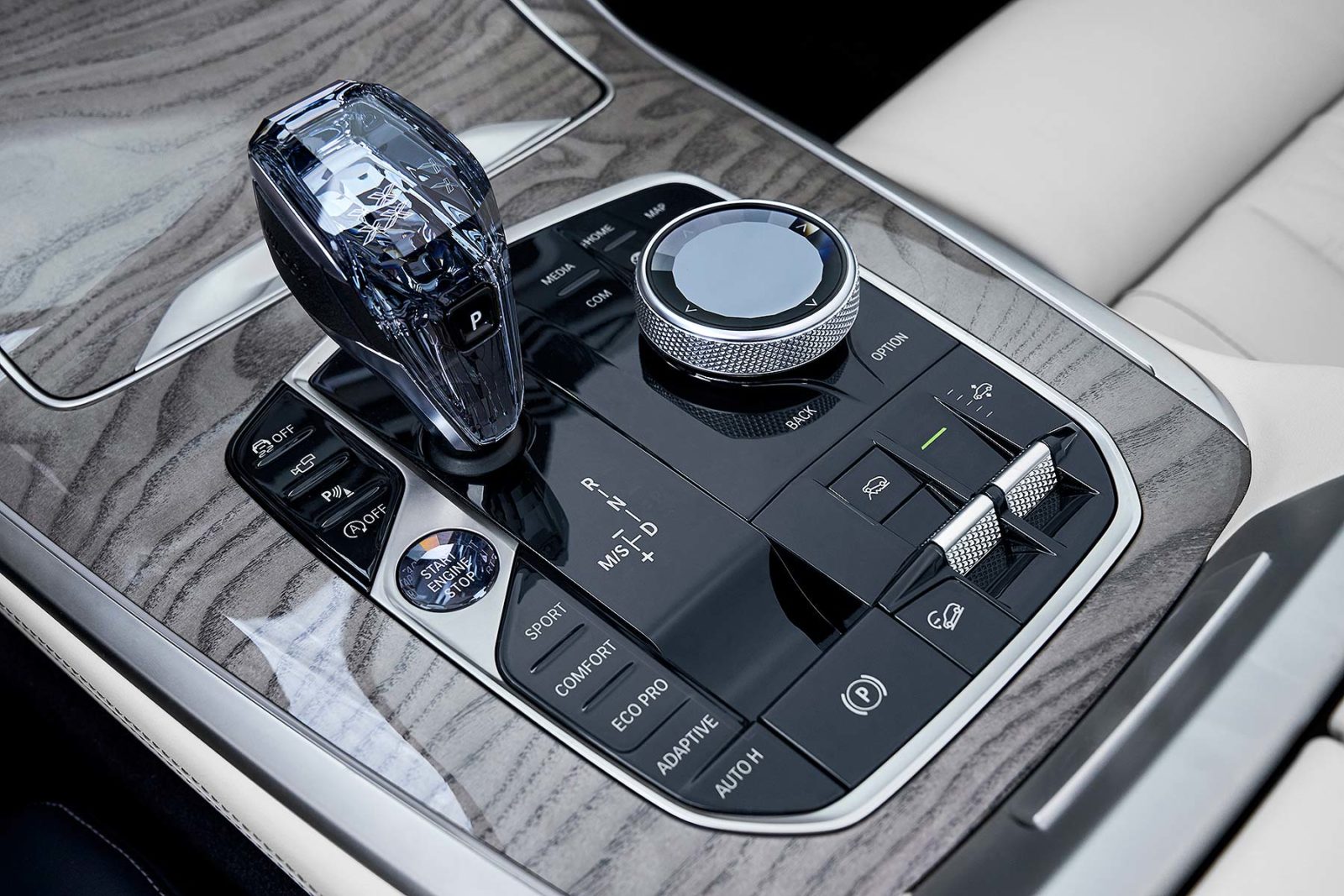 Handcrafted crystal glass has been used to create the gear selection lever, volume control, iDrive Controller and the Engine Start/Stop button. This only adds to its luxurious look and feel.

The car is a performance juggernaut that is powered by a 6-cylinder 3.0-litre Twin Power Turbo Petrol engine. The engine has a displacement of 2998CC that produces 340HP and a maximum torque of 450 Nm.

The new BMW X7 has Servotronic steering which adjusts the steering sensitivity according to the speed of the car, along with a standard cruise control feature.

The headlights have an adaptive feature, changing the beams’ intensity and direction automatically, allowing the driver to focus on the road instead of fumbling around with the headlight controls. Speaking of comfort, X7’s adaptive two-axle air suspension which allows sturdier dampening while providing the best possible balance and comfort while going over puddles or uneven road.

The X7 also has a Park Distance Control (PDC) feature which uses ultrasonic sensors installed in the front and rear side of the X7, detecting objects in real-time and warning the driver if anything gets too close. 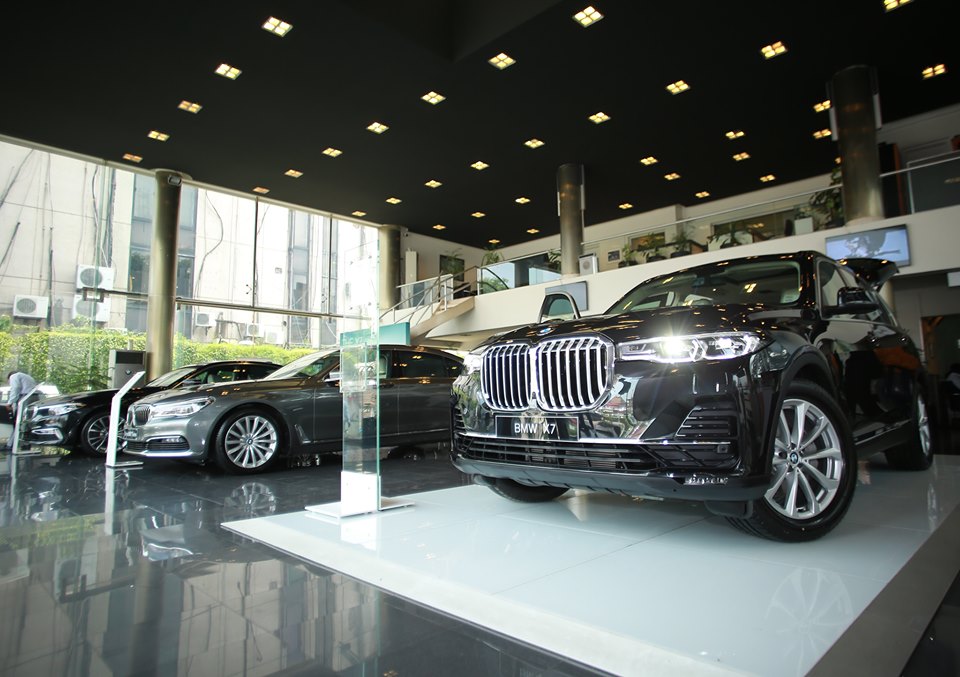 The BMW X7 is currently available in a black sapphire metallic color and according to Dewan motors, EUR 305,000 (PKR 54.62 million based on current exchange rates) including taxes/duties and import costs.

For reference, in the US, the same model with all options costs $100,000, which is significantly lower than what the X7 XDrive40i costs in Pakistan.