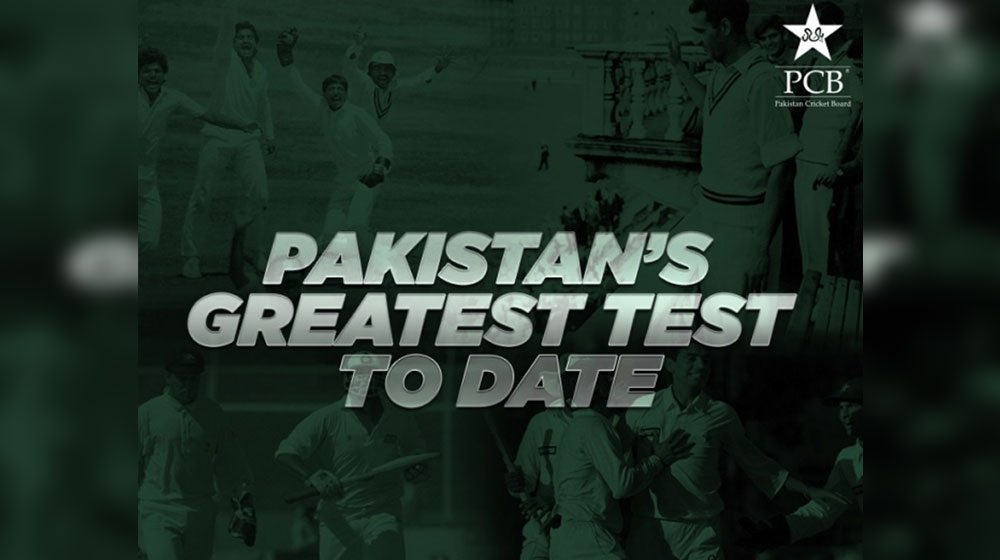 Pakistan has nearly seven decades of Test cricket history with dozens of memorable matches which either hold a lot of significance or were nail-biters that had viewers on the edges of their seats.

Pakistan Cricket Board (PCB) has decided to decide Pakistan cricket’s greatest ever test match once and for all. The board is going to conduct a public poll to determine fans’ favorite Test match to date. The poll was announced on Thursday while the voting is set to begin tomorrow (Friday).

In its press release, the PCB announced that voting for the poll will start from July 26 to conclude on July 29.

Every cricket fan, whether Pakistani or not, can now vote for the best Test match on PCB’s official Twitter handle or Facebook page.

Speaking to the media regarding this, PCB’s Managing Director, Wasim Khan said:

Fans are the real assets of the PCB, and it is appropriate they get an opportunity to vote for Pakistan’s greatest Test to date and join the global cricket community in celebrating the ICC World Test Championship launch.

He also thanked the jury for carrying out the arduous task of scrutinizing four Tests out of Pakistan’s 432 wins.

The four Tests chosen by the independent panel are:

Here’s a brief overview of all four matches:

Pakistan started their Test match journey in 1952 and two years later, they were up against England. The 1954 Test match saw Fazal Mahmood shine and his 12 for 99 helped Pakistan become only the second country to win a Test on their first-ever tour to England. The series was drawn 1-1.

Pakistan’s spin duo, Tauseef Ahmed and Iqbal Qasim, spun a web around Indian batsmen to hand their country a famous 16-run victory over India in the fifth and the last match of the series. Both spinners shared 18 wickets out of 20 in the game and helped Pakistan secure its first-ever series win over the arch-rivals on their home soil.

Former Pakistan captain Inzamam-ul-Haq built a 57-run partnership with Mushtaq Ahmed for the last wicket to deny Australia from ending their 35-year-long win-drought in Pakistan.

Pakistan was staring at a loss as Little Master Sachin Tendulkar was standing on 136 and India was just inches away from winning the 1st match of the three-match Test series in India. That was when the magic of Saqlain begun to change things in Pakistan’s favor. He removed Sachin and swept off the tail to hand Pakistan a memorable 12-run victory in a thrilling contest.