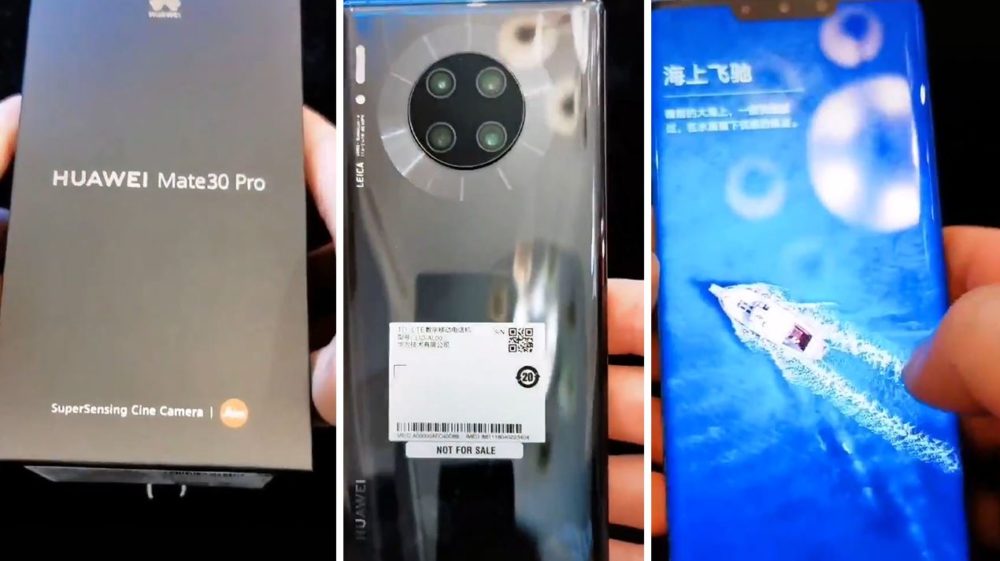 Huawei is going to unveil the upcoming Mate 30 series of flagships on September 19. These include the Mate 30, Mate 30 Pro, Mate 30 Lite and the most premium of the bunch, the Mate 30 Porche design. Now just a day ahead of its official launch, a set of leaked hands-on images of the Mate 30 and Mate 30 Pro have surfaced on the internet which gives us the closest look on the phones so far.

The images that surfaced on Weibo confirm all the design speculations so far and also reveal all the color options for the Huawei Mate 30 Pro. The phone will come with Space Silver, Cosmic Purple, Black, and Emerald Green color options.

The difference in the displays of the two phones can be seen in the first image. The standard Mate 30 has a flat-screen with a small notch at the top, whereas the Mate 30 Pro is flaunting its waterfall display. The notch on the Mate 30 Pro seems to be housing multiple camera sensors, one of which is probably a ToF sensor.

Both the phones will be housing a quad-camera set up in a circular cutout at the back, reminiscent of Nokia’s Lumia series. It is speculated that this camera module will house two 40MP cameras alongside a telephoto and ToF sensor.

Going over the specifications, the Huawei mate 30 series will come with the recently revealed 7nm Kirin 990 SoC with EMUI 10 on top of an open-source version of android 10 (AOSP) without any Google services. The Mate 30 will feature a 4300 mAh battery, whereas the Mate 30 Pro will have a 4500 mAh power cell with 27W and 40W fast charging respectively.

And to top it all off, there is even an unboxing video for the Huawei Mate 30 Pro that gives us an even better look at the device. The Huawei Mate 30 series is expected to go official on September 19.