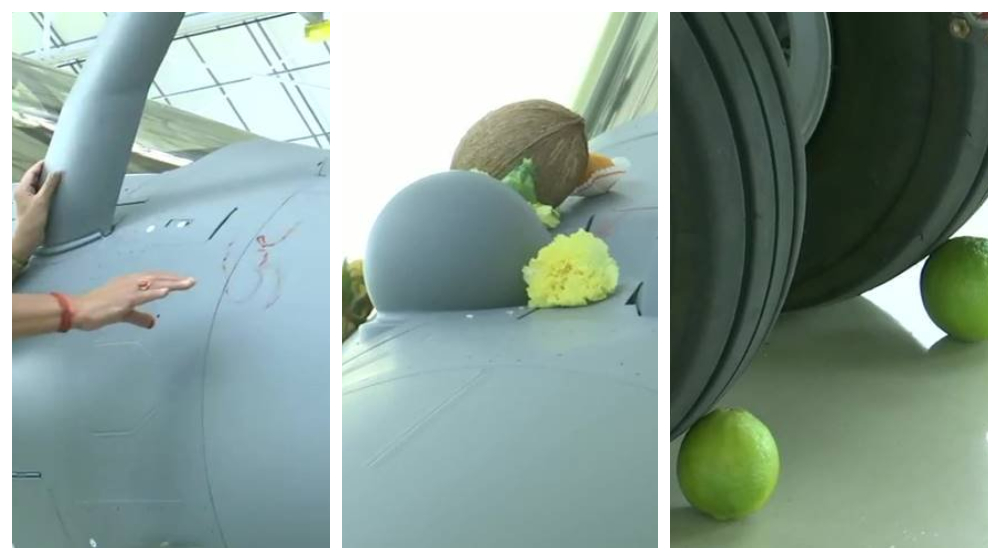 India has received the first of its 36 Rafale aircraft from France during a ceremony at Bordeaux, France on Tuesday.

Senior officials of the Indian Air Force (IAF) and the Defence Minister, Rajnath Singh were present at the ceremony. The deal with France is considered to be one of the most expensive in Indian history as pressure from inside India is building to ensure transparency in such mega-deals.

The acquisition has been done to beef up India’s air defense especially with a number of outdated Mig-21s crashing regularly.

All things aside, the ceremony was marked with their ritual worship, Shastra Puja, to protect the aircraft from evil and whatnot. The lemons and coconuts are making people laugh big time and you are going to as well.

The Twitterati are having a field day, making fun of the acquisition in hilarious ways. Let’s have a look:

It is shameful that these nationalists calling it a historic day, when a country of 1.3 billion buying French made 36 Rafale fighter jets, which other countries have refused to buy except Egypt & Qatar! https://t.co/9mRK1GxPkv

Why is Rajnath Singh pushing the #Rafale jet?

Doesnt it work on Fuel? pic.twitter.com/E6zBwY0gfA

RSS occupied state of India purchased #Rafale aircraft, on the other hand Pakistan himself is manufacturing aircrafts.

However can Bhakats purchase the world class highly professional Pilots like Pakistan? Never.

It's the war of courage and morality, which cannot be purchased.

Will serve you another Tea, but this time would be of "Lemon Flavor". Lemons which your Defence Minister placed on #Rafale. Trust me, you will like that flavor too from Pakistan side. Will also send an extra cup for #Abhinandan too.#PakistanZindabad #PakistanAirForce #PakArmy https://t.co/jcs45RLGKE