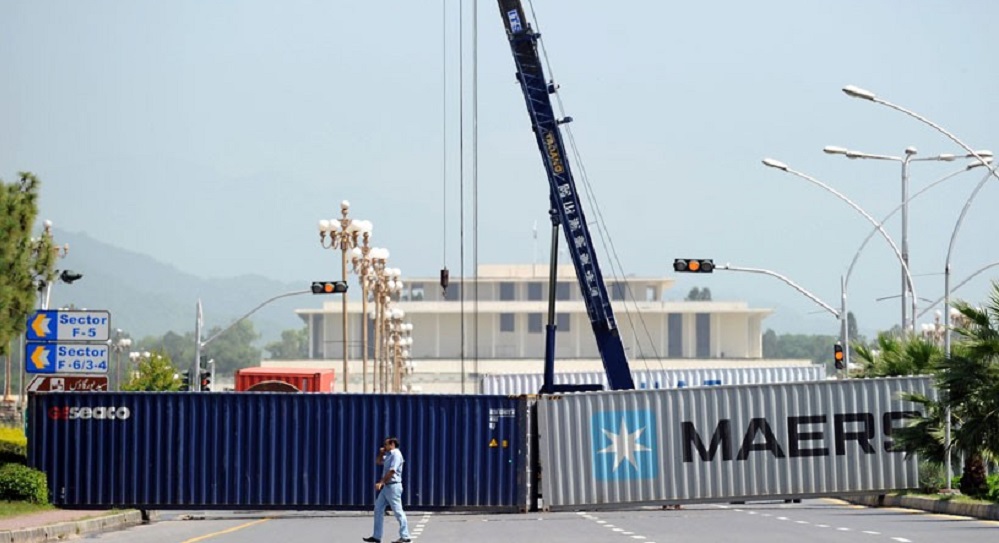 The government is renting 500 containers which will be used to seal the capital and contain the flow of participants of Jamiat Ulema-i-Islam-Fazl’s (JUI-F) Azadi March.

According to a report by a local newspaper, the company providing the containers said that it won the tender to do so by submitting the lowest bid. According to the contract, the government will pay a daily rate to rent the containers and will be responsible for any damages or theft.

Previously, the police confiscated shipping containers to seal off the city during protests.

Rana Habibur Rehman, the owner of the logistics company says,

Although I cannot share the per day rent of the containers since it is our business secret, I can say that all the containers are empty and can be checked by anyone. They have been placed in different places across the capital and will be there for an unlimited period. We will remove them the day we are directed by the police that the containers are not required anymore.

The report stated that under the agreement with the contractor, the government will pay for any damage or theft. He said the government floated a tender for shipping containers and a number of companies filed bids.

“Our company has around 1,000 containers, of which 500 have been placed in the capital and the remaining are placed in various cities such as Peshawar and Lahore,” he said.

Islamabad police confiscated a number of containers during PTI’s 2014 sit-in. At the time, trailer drivers protested and reached the Secretariat in G6. Imran Khan had expressed solidarity with them and condemned the confiscation of containers.

Deputed at a check-post on Faqir Aipee Road, Sabzi Mandi, police official Muzaffar Ali said the police have not confiscated any containers this time.

“As per the agreement, the per-day rent of a large container will be Rs. 35,000 and Rs. 20,000 for a small container. Although the company has claimed that 500 containers have been placed in the capital, we have decided to mark all the containers because [if fewer containers are used] it will be a loss to the national exchequer,” he said.

Another official of a logistics company says that some containers were confiscated by the authorities. This statement hasn’t been confirmed, however.