International investors have piled $642.5 million into local-currency bonds in November alone. Quoting Pakistan’s Central Bank, Bloomberg reported that the amount is more than what the global investors have invested in debt in the past four years.

Interest in the Pakistani bonds has surged this year as the State Bank of Pakistan more than doubled its policy rate to 13.25% – the highest in Asia – to help stabilize the economy. 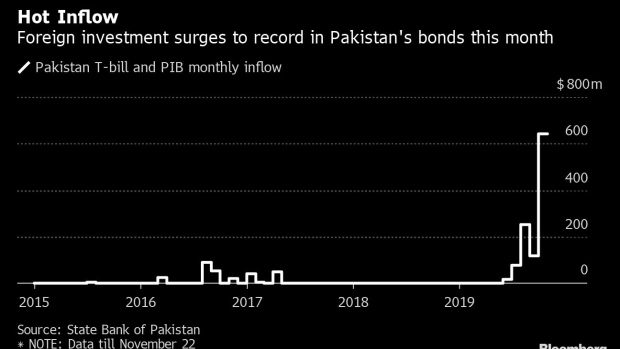 That, along with government efforts to improve public finances with support from the International Monetary Fund, has boosted the allure of the notes as the world’s pool of negative-yielding debt deepened, stated the report.

Bilal Khan, who is a senior economist at Standard Chartered Plc in Dubai, told Bloomberg that Pakistan “stands out” in a low-yield global environment “following the recent rate hikes and currency adjustment – and more broadly, the reform momentum under the IMF.”

The State Bank’s data showed that the foreign inflows in November have all gone into Treasury bills – which have a maximum holding period of 1 year – with 55% of them coming from the U.K. and 44% from the U.S.

Pakistan’s local-debt market has not traditionally been a magnet for portfolio flows like other emerging markets and wasn’t attractive for years, said Khan, who visited fund managers in Europe last month inquiring about Pakistan.

What Are Treasury Bills?

These bills are zero coupon instruments which are issued by the Government of Pakistan and sold through the State Bank of Pakistan via fortnightly auctions. T-Bills are issued with maturities of 3-months, 6-months and 1 Year and are issued at a discount. T-Bills are risk-free, SLR eligible securities that are actively traded in the secondary market and are therefore highly liquid.