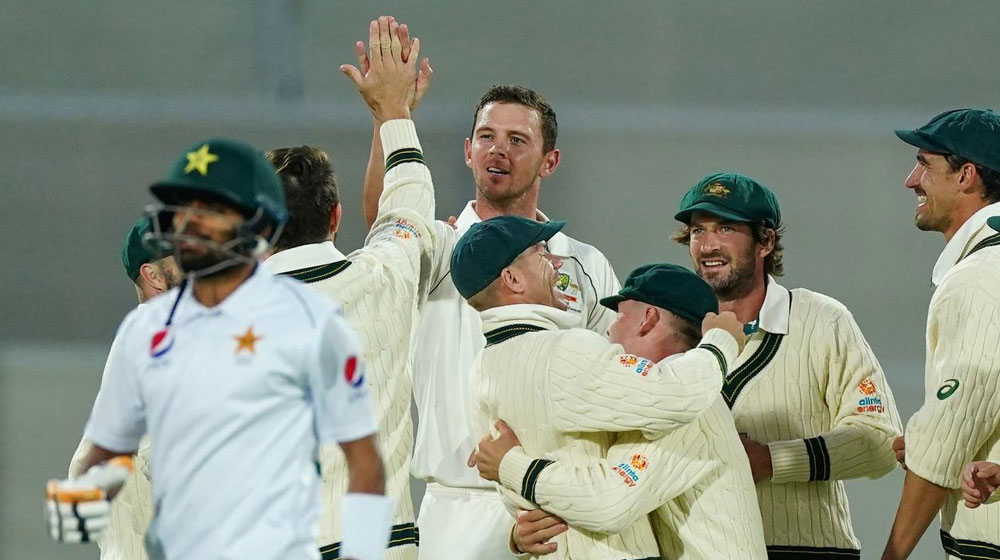 Nathan Lyon’s 5-for in the second innings helped Australia complete a convincing clean sweep in the two-match Test series against Pakistan.

The visitors failed to overcome the second inning deficit of 287 runs and were bundled out for 239, losing the game by an innings and 48 runs.

This was Pakistan’s second consecutive innings’ defeat in the two-match Test series. With this shameful loss, Pakistan stooped to new a new low with 14 Test defeats on the trot in Australia.

After opting to bat first, Australia put a mammoth total of 589/3 on the back of David Warner’s unbeaten 335 runs. Marnus Labuschagne scored 162, his second consecutive 150+ score in the series.

All three wickets were taken by Shaheen Shah Afridi, who remained to be the most successful bowler for Pakistan in the match.

The first innings was more of a fast bowlers’ show where Mitchell Starc claimed six scalps in the innings while Pat Cummins took three wickets.

Ponting Labels Pakistan’s Bowling Attack as One of the Worst

Australia decided not to bat the second time and enforced a follow-on.

Pakistan needed 287 runs to avoid another innings loss, but the top order failed again. No batsmen other than Shaan Masood (68), Asad Shafiq (57), and Mohammad Rizwan (45) could put up a show on a flat batting pitch.

The touring side has not won a Test match against Australia since 1999. Out of 26 Test matches Pakistan has played in the country, they won only 4, including a 1-0 series win back in 1989-90 when Imran Khan was leading the side.