After seeing an increasing interest in T’bills, Pakistan wants to offer longer-tenor securities to the global investors, reported Bloomberg.

The State Bank of Pakistan is considering different ways to raise liquidity and improve price discovery in the debt market in order to ensure that the foreign funds stay invested for a longer tenor. The sticky money will boost the efforts to overturn Pakistan’s economy which is riddled with high debt, low growth and low foreign currency reserves, stated the report.

Having deeper segments means that these instruments become more attractive to non-residents as well because they want turnover in the secondary market.

In this fiscal year which started in July, the foreign investors have invested around $1.2 billion into local-currency bonds, which is higher than the investment they have made in the debt in the past four years, SBP data shows. 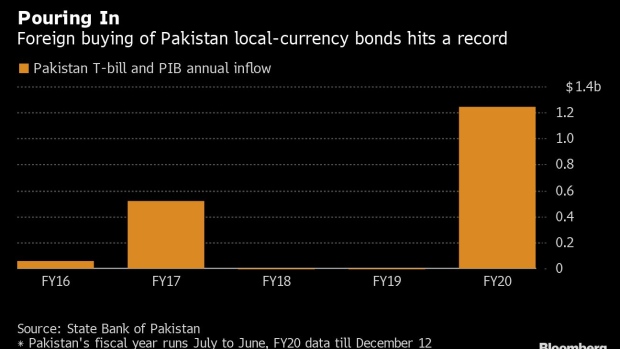 This was due to an increase in Pakistan’s policy rate to 13.25%, which has been doubled over the past years and is standing  — the highest in Asia.

According to the Financial Markets Association of Pakistan, all that money has been invested into Treasury bills — which have a maximum holding period of 1 year. Baqir wants to increase this period.

SBP is devising a strategy with the finance ministry, which includes bond buybacks and other measures. “There are many scattered issues from market liquidity and transparency and price discovery,” Baqir told Bloomberg.

Citigroup Inc’s Moiz Hassan Ali, while talking to Bloomberg, said that most of the inquiries he has received from overseas clients are for the 3-month bills with only a few about the 1-year paper.

Hussain in a media briefing earlier this month claimed some foreign investors among his own client base were already showing interest in going into longer tenors, saying he had already placed one client in the 12-month paper. He was confident that others will follow once they develop a sense of comfort with the Pakistani debt market.