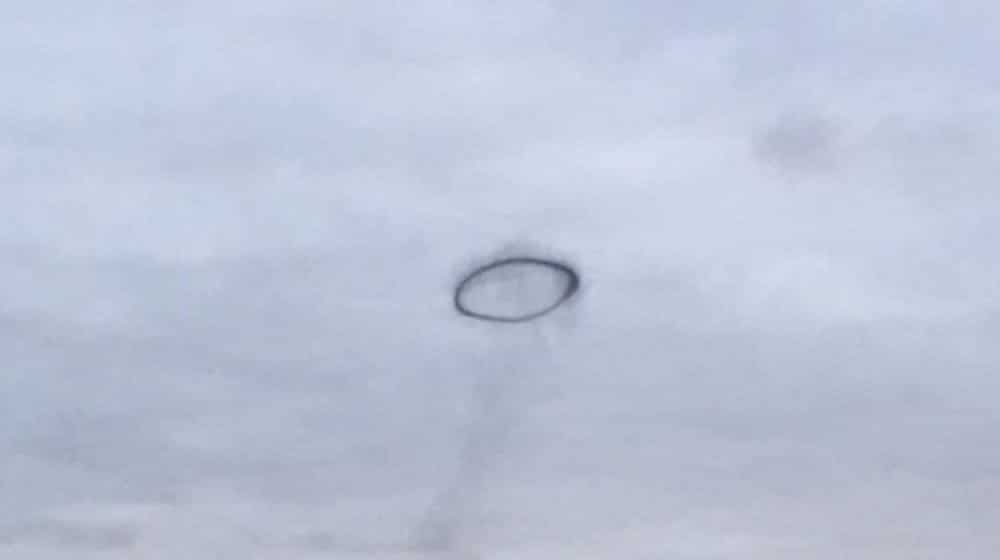 People from northern parts of Punjab and its capital Lahore woke up to pleasant weather today as a blanket of cloud covered the sky for the most part of the day.

While some may argue that rains aren’t a welcome sight in winters, it definitely clears the atmosphere, especially in a city like Lahore where fog and smog are a usual spectacle throughout the season.

Just when everyone was busy enjoying the sun rays coming through patches of cloud, people noticed a mysterious black ring of smoke in Lahore.

They are here. #Lahore #Aliens pic.twitter.com/OfWPG20Il9

Such strange phenomena are usually linked to aliens. Some believe that these are alien spaceships, portals or something similar that become visible at random places without any reason.

Are the aliens finally here? Well, no.

They only land in America, a Twitter user joked.

Impossible! Aliens only land in America.

Is it a portal to hell or a giant smoke puff? The phenomenon has got everyone talking and with the Netflix show Messiah making waves in recent days, the curiosity is sky-high.

It has nothing to do with any of the above and certainly not what my fellows at Lens by ProPakistani have claimed; a publicity stunt for hit drama serial Mere Pass Tum Ho’s finale.

And, this isn’t the first time a similar O-shaped ring created a buzz on the internet. Similar smoke vertices have been spotted over a small village in Kazakhstan in 2015, Warwick in England, and over Florida and Chicago in the US.

The causes for these smoke rings were traced to be because of fireworks tests, pyrotechnic tests or an electrical transformer blow-up. Such smoke rings require a blast through a circular structure and these rings usually vanish after 10-15 minutes.

While the reason behind this mystery ring is not known yet, it is probably not that eerie as Twitterati is projecting it to be.

What are your thoughts on the black smoke ring over Lahore? Let us know in the comments section.