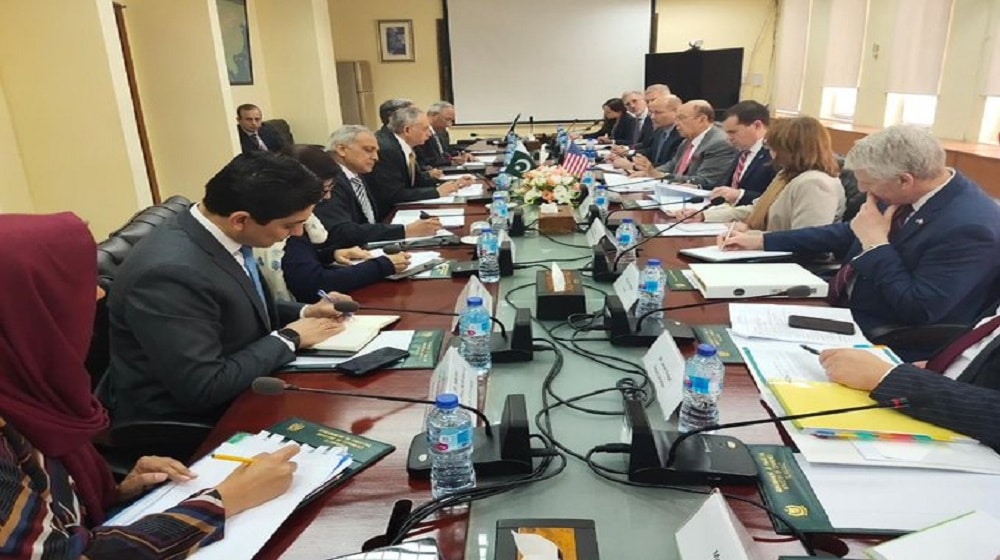 In line with US and Pakistani leadership’s aim to increase economic engagement with a focus on trade and investment, Mr. Wilbur Ross, US Secretary of Commerce visited Islamabad on 26th February 2020.

The visit was the outcome of recent discussions of Prime Minister Mr. Imran Khan and President Donald Trump to promote bilateral trade and enhanced economic engagement.

During his meeting with Mr. Abdul Razak Dawood, Advisor to Prime Minister on Commerce, Industries & Production and Investment, issues related to bilateral trade and enhanced market access to Pakistan were discussed.

Wilbur stated that the United States is willing to enhance trade and investment in Pakistan.

Ross made the offer in a meeting with Adviser to PM on Commerce Abdul Razak Dawood in Islamabad. “We fully support trade and development in the country. Pakistan needs to enhance bilateral ties with the US,” he said.

Abdul Razak Dawood said they will try their best to provide all the facilities to the exporters.

We are taking steps to make this a favorable trade environment. There are many business opportunities for US businessmen in the country.

He added that textile and other products should also be granted preferential trade agreements.

The Adviser told the visiting delegation that after achieving economic stability, the government is now focusing on job creation and export augmentation by encouraging foreign investments.

Ross further stated that several US companies are interested in increasing investment in the country and the US wants to take part in Pakistan’s progress and prosperity. Regarding the IDFC assistance, he sounded positive and suggested that Ministry of Commerce should propose projects in this regard.

Earlier, Ross also met with US companies doing in business in Pakistan. In a tweet, posted by the US embassy in Islamabad, the US exported $2.6 billion worth of goods to Pakistan in 2019.

U.S. Commerce @SecretaryRoss met w/U.S. companies doing business in #Pakistan. The U.S. exported $2.6 billion worth of goods to Pakistan in 2019. U.S. companies made more than $1.4 billion in direct #investments in Pakistan since 2016. #Partners4Prosperity #USPAK #USinPAK pic.twitter.com/682jg4HgE9

Ross also tweeted that he was looking forward to his meeting with PM Imran in Islamabad.

As President Trump said this week, “our relationship with Pakistan is a very good one.” I look forward to meeting with Pakistan’s Prime Minister @ImranKhanPTI in Islamabad today on ways to boost trade and investment between the U.S. and Pakistan.

In a meeting with Secretary Ross, Minister for Energy, Omar Ayub Khan called for greater US investment in the energy sector including areas such as power generation, transmission, and distribution, artificial intelligence, renewable energy, hydel energy, and training opportunities.

The minister also reaffirmed Pakistan’s commitment to cleaner fuels and green energy. The Special Assistant to Prime Minister on Petroleum, Mr. Nadeem Babar informed the visiting side about key action taken to improve ease of doing business in Pakistan. SAPM also shared how more US investment could help in improving the business relations between both the US and Pakistan.

The US commerce secretary also met with Adviser to the Prime Minister on Finance Dr Hafeez Shaikh.

The Adviser welcomed the Secretary Commerce and said that Pakistan and United States had maintained a durable relationship over the years and there is a need to strengthen it further. He said that the arrival of the delegation from the commerce sector is good news for Pakistan and would have positive consequences for the country

This is at a time when the government is looking forward to a major boost in exports after offering concessions to the export-oriented sector of Pakistan.

The US Secretary Commerce said they can help Pakistan in the energy sector and the details of the projects where economic cooperation could be enhanced are being worked on. The Adviser said that he hopes that a healthy interaction shall continue in the future as well.

The Adviser said that Pakistan is trying to carve out a new progressive image in the comity of nations. ‘

We have tried to follow the FATF action plan to a significant level, opened our markets to the foreign investors by providing ease of doing business and we are trying to build our image as a tourism-friendly and investment-opportunity country in the region.