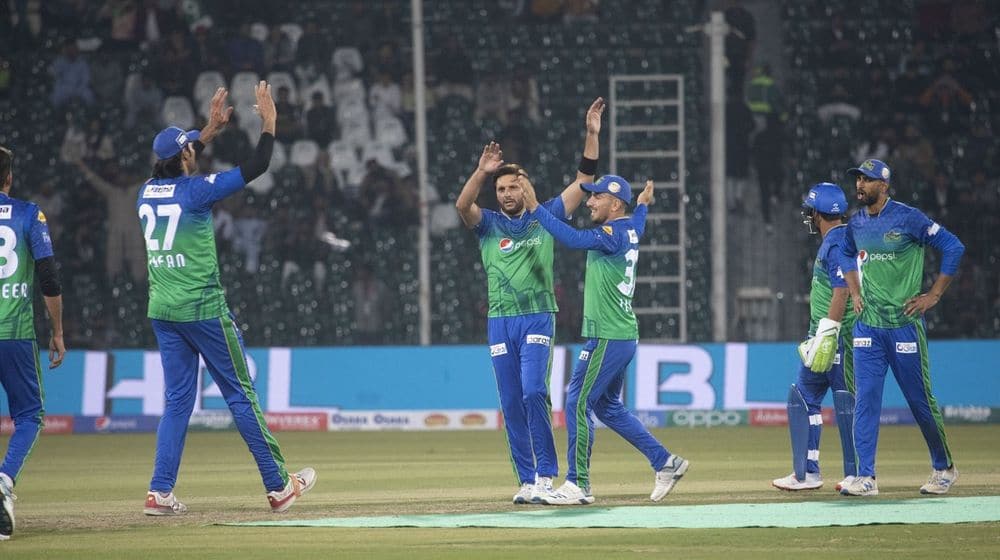 Karachi Kings opted to bowl first after winning the toss.

Moeen (65) got into the groove really quickly as well scoring his firs PSL fifty. Captain Shan Masood (61) also joined the party and went on to raise his half-century. Small contributions from the lower order made sure that the home team posted a very strong total of 186/6 on the board.

Sharjeel Khan walked back to the pavilion very early in the chase with only 19 runs on the board. Babar Azam couldn’t kick on as well, scoring just 13 runs to leave his team reeling at 45/2. It took a special catch by Mohammad Ilyas to send him packing.

Alex Hales tried to provide the much-needed impetus, however, Shahid Afridi crushed Kings’ dreams by sending him back to the dugout without doing much damage. He scored 29 from 21 balls.

Sultans spinners worked in tandem to rip apart the opposition’s batting line-up as they thumped them by 52 runs.

After plenty of drama last night in Rawalpindi, it’s a double-header Friday, with today’s first match scheduled between Multan Sultans and Karachi Kings at Multan Cricket Stadium whereas Rawalpindi will host the night match between Lahore Qalandars and Peshawar Zalmi.

Things are getting pretty interesting in terms of the points table as Quetta Gladiators have climbed to the top with their nervy win against Islamabad United on Thursday.

Here’s all you need to know about today’s match:

There is a slight change in timings on Friday due to the prayers which is why both the matches are scheduled an hour later than the usual timings.

Multan Sultans and Karachi Kings have faced each other 4 times in PSL. Sultans are yet to defeat Kings, which makes the contest even more thrilling as there will be plenty on the line for the home team.

Having won the previous match, Multan Sultans are unlikely to change their winning combination. The same cannot be said about Karachi Kings which lost its previous match.

Multan Sultans:
Mohammad Irfan played a crucial role in pinning down the opposition in their last match right from the start. His ability to provide good starts with the ball will be the key for Sultans.

Karachi Kings:
Alex Hales is a pure match-winner and he can win games for any side he plays even from impossible situations. His presence in the team is a huge plus for the Kings.