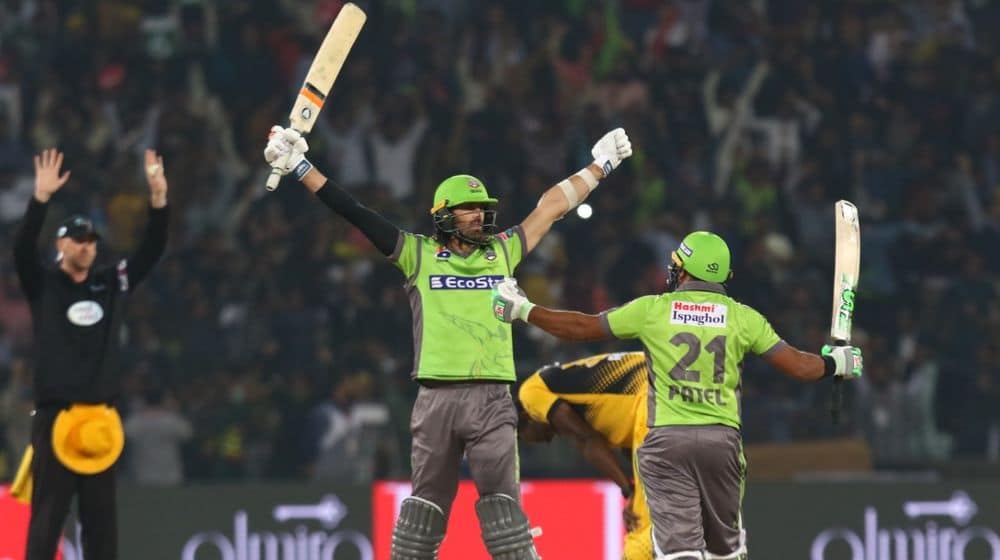 Samit Patel was in the mood yet again and he was quick to get two wickets in his first couple of overs to dent Peshawar Zalmi’s first innings. He removed Kamran Akmal for the fourth time in PSL after Shaheen Afridi got Tom Banton out for a duck.

It provided teenager, Haider Ali, the opportunity to go on and score his first-ever PLS fifty. He became the youngest ever player in PSL history. Shoaib Malik also scored a half-century to set a strong target for Lahore.

Lahore openers added fifty for the first wicket, only to throw away the perfect start with a bizarre run-out. After that, it was a brilliant partnership of 96 between Fakhar Zaman and Chris Lynn to take Qalandars within the touching distance of a win.

The two scored fifties, however, both got out at the wrong time when the team needed them most.

Needing 40 from 4 overs, Qalandars had Ben Dunk and Mohammad Hafeez on the crease. Hafeez couldn’t quite play the role he was entrusted with and got out after scoring just 4 runs, making the chase even tenser.

Looks like Zalmi had cracked the code as they removed Dunk for 7. It was a nervy finish as David Wiese and Samit Patel were there to win it for Lahore.

After a day’s break, Lahore Qalandars are back in action at the Gaddafi Stadium Lahore and they will be taking on Peshawar Zalmi. It’s their 8th match and if they can get another win, it would make things very interesting in terms of the qualification scenarios.

Peshawar, on the other hand, can seal play-offs qualification if they win tonight. It is going to be an absolute thriller if Lahore batsmen can take some responsibility to lift some weight off Ben Dunk’s shoulders.

Lahore Qalandars will be hoping to improve their record against former champions as they have won only one game out of the 9 matches they have played so far.

Lahore Qalandars:
Sohail Akhtar’s contribution in the last match was not lauded as much as it deserved, however, he played a crucial role in the win alongside Ben Dunk.

Peshawar Zalmi:
Tom Banton is a big match player and he will have to prove it tonight.