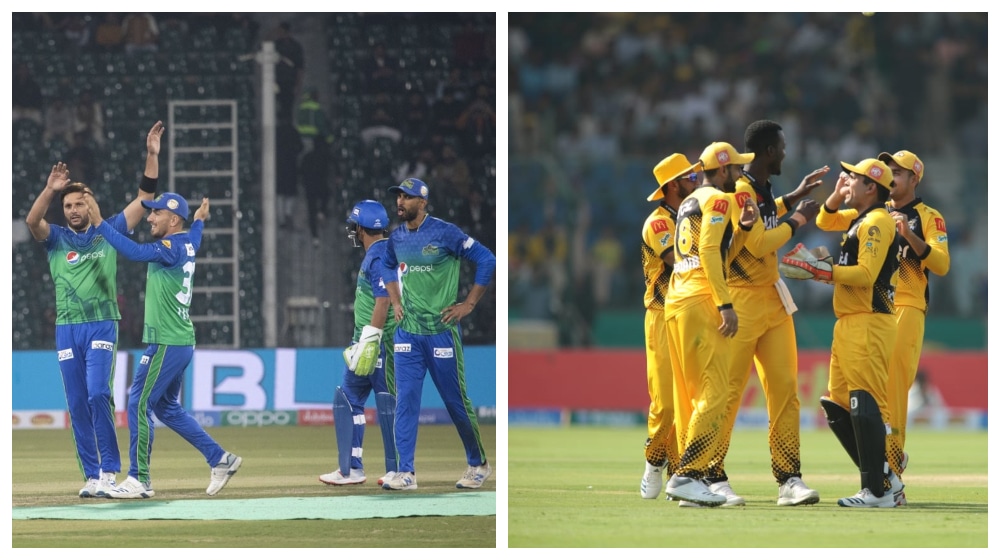 Peshawar Zalmi won the toss and elected to field first.

Being put in to bat, Multan openers added 32 after a cautious start. Rohail Nazir went back to the pavilion while trying to up the ante as he tried to heave one over mid-wicket.

After that, Shan Masood and Zeeshan Ashraf added 60 runs for the second wicket. Zeeshan got out after scoring 52 from 39 runs in the 12th over. His wicket slowed down the proceedings, however, a late cameo from Khushdil Shah took Sultans over 150.

Peshawar Zalmi were dealt with two quick blows in the form of Kamran Akmal and captain Wahab Riaz as they were 8/2 in the 3rd over.

Umar Amin looked good before being cleaned up by Moeen Ali for 29. Imam-ul-Haq and Shoaib Malik steadied the innings as the left-handed opener went on to score his first fifty of the season. He played a brilliant knock of 56 runs before being removed by Sohail Tanvir.

Wickets in quick succession at the end made the contest thrilling as Zalmi needed 25 off 2 overs with 4 wickets in hand. Sohail Tanvir and Ali Shafiq pulled the match back in the favor of Sultans as they clinched the victory by 3 runs.

Peshawar Zalmi will look to cement their semifinals’ place with a win over Multan Sultans. The two sides are scheduled to lock horns today at the National Stadium Karachi.

In the last encounter, Multan outplayed Peshawar Zalmi to register a thumping win. It was a magnificent bowling display from Sultans with all five bowlers among the wickets. However, the left-arm pacer, Sohail Tanvir, was the pick of the lot, with four wickets for just 13 runs.

This time around, it could be a different ball game as this game will pretty much decide Zalmi’s future in the league. Meanwhile, Sultans, who have already qualified for the semis, will have a chance to test their bench strength.

With this said, let’s now take a look at all the related information about today’s PSL 2020 fixture.

So far, the two teams have faced each other five times with Multan Sultans emerging victorious on three occasions. This is another reason for Zalmi to win this do-or-die game fixture.

With reports of unavailability of some of the foreign players amid coronavirus threat, expect a lot of changes to both sides.

Multan Sultans:
Zeeshan Ashraf has been in great knick of late. Expect him to get going today.

In the previous game, Kamran got out early. However, he has an excellent track record in Karachi, and tonight could be his night.