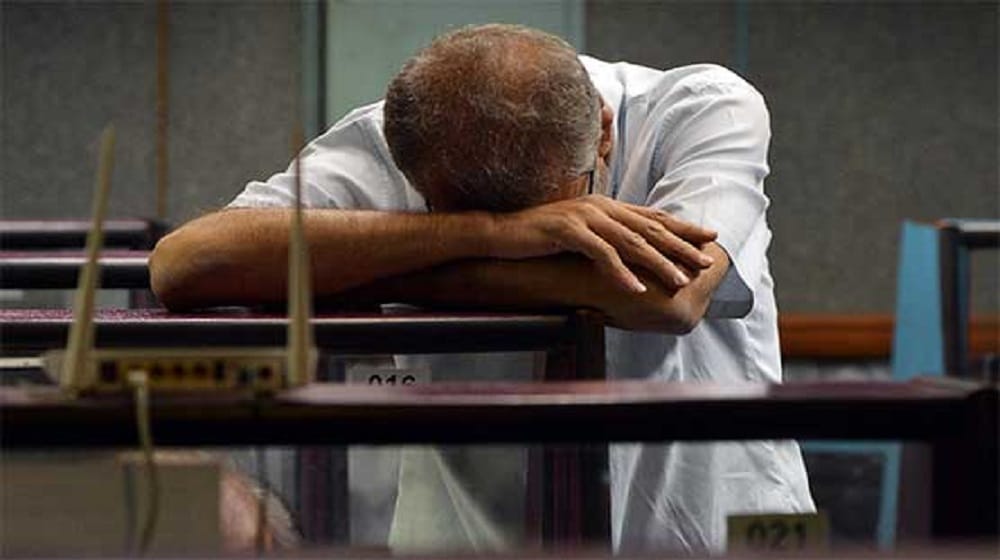 Stocks around the world, have been in a free-fall for some time now due to worries about the impact of the coronavirus outbreak on the global economy. Pakistan wasn’t safe either as another massacre was seen during the first day of the week with last week’s negative sentiment continuing into this week.

PSX’s benchmark index, KSE-100 index declined by 2375 points in today’s session which was the highest ever decline in history in terms of points. It touched an intraday low of 2,442 points on Monday.

The market closed at 33,664 points, declining 6.59%, which is the highest decline in percentage terms since 20th May 2002, according to Arif Habib Ltd. 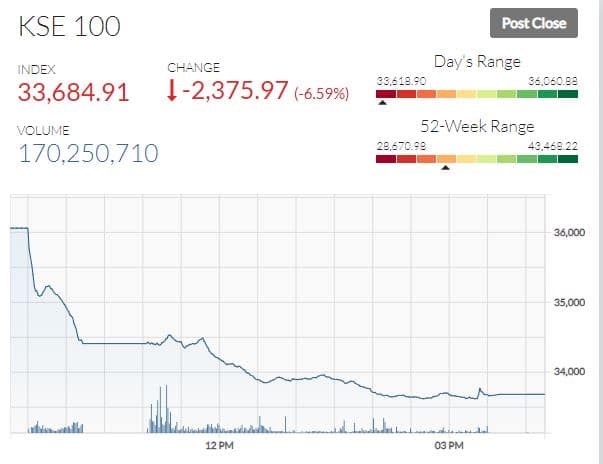 Over Rs. 383 billion was wiped off from the market during today’s session, according to Capital Stake.

Shortly after the stock market opened Monday, the market went in the red zone. For the fourth time in six working days, trading was halted at the Pakistan Stock Exchange after the KSE-30 index fell by more than 5%.

The activity was halted around 10:13 am today for 45 minutes under a rule meant to give the market a chance to recover when severe price declines could exhaust liquidity.

Adnan Sami Sheikh, AVP Research at Pak Kuwait Investment Co said coronavirus fears are culminating into panic sell-off in global stocks and Pakistan is no different. He added that equity investors will have to bear more losses in the future.

The pandemic dampened the investors’ sentiments as Pakistan doubled its count of coronavirus patients over the weekend while trade disruptions and uncertainty resulting from the virus outbreak remain.

Zain Uddin, Senior Research Analyst at Cedar Capital said that Banks & Oil pushed the overall sentiment of the market down on the back of the coronavirus outbreak around 158 Countries including Pakistan, as over 100 cases were reported in Pakistan. He also stated that the FED rate cut to 0% put pressure on the US Futures, as the pressure was reflecting in other exchanges today. He added that foreign selling was also witnessed in the market today.